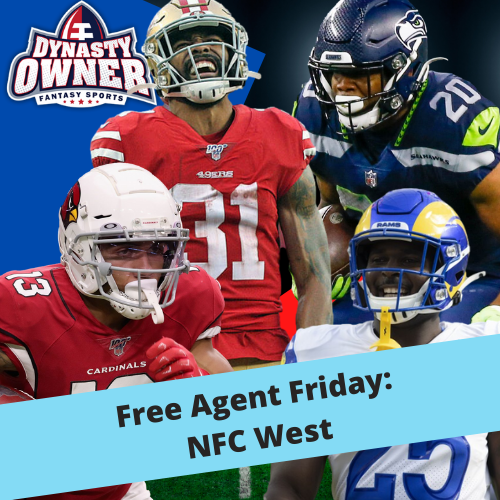 Hello Dynasty Owners, and welcome to the off-season. Like last year, this year I will be reporting on notable offensive free agents. The method I use to judge which players I want to include is subjective, but I will do my best to bring you news on every free agent that I can. Additionally, I will be doing a little bit of a different format this year. Last year I used one week to talk about a single team. This was a useful plan, but it also had one major flaw. The flaw was that the teams I talked about earlier in the off-season didn’t get much, if any, attention after free agency. To remedy this, I will be writing about every team once before free agency and once after free agency.

I will be breaking all the free agents into divisions before free agency starts, and then I will be doing more of an individual article post-free agency. I still have to work out some of the details, but the main takeaway is that free agent talk is back! This is truly one of my favorite aspects of fantasy football to write about, and what better format to talk about it in than Dynasty Owner! Without further discussion, let’s talk about the first division…

I will list every notable offensive free agent for each team in my weekly articles, and for brevity’s sake, I will only talk about a select few of those players. Don’t worry, I will eventually talk about every player throughout the off-season as I will be bringing back my “News” segment where I tell you about the latest free agency news.

Not too much to talk about here with the Seahawks free agents. All three are unrestricted free agents (UFA). Alex Collins and Gerald Everett are both aging for their positions. At 27, they are likely to make more money than their previous contracts, but I don’t anticipate either of them to make a large fantasy impact in 2022. I will say that Everett had a better season than I expected, but a sub-50 receptions, sub-500 receiving yards and sub-5 touchdowns season is not what Dynasty Owners are looking for in a 6-8 million dollar tight end.

No…the player I’m most interested in is Rashaad Penny. Penny’s final month of the 2021 fantasy season has greatly increased his career outlook. I don’t like to look too much into small samples, but the explosiveness and dominance that he showed cannot be ignored. The Seahawks already declined to pick up Penny’s fifth year option back in May. All signs point to Penny entering free agency, and he comes in as one of my Top 10 players to watch this off-season. I expect him to earn a contract somewhere close to 2 years – $ 10,000,000. The top landing spot for Penny at the moment is Miami.

The 49ers have even less notable free agents than the Seahawks, but I think both of these players could be interesting additions to several teams.

Here we have two running backs. Both have had decent success although it has been sporadic.  Jeff Wilson filled in nicely for San Francisco in Weeks 15 and 16. In those two weeks, he had over 160 total yards and two touchdowns. I would be willing to bet that the 49ers re-sign Wilson to a contract similar to his current one. Jeff has kind of locked himself into the 2 – 3 million dollar range given his limited production as a backup running back.

Mostert is a little more interesting mainly because of his explosiveness and previous success in the 2019 season. With that being said, Mostert is often injured. He missed half of his games in 2020, and he had only 2 carries in 2021 before suffering a season ending knee injury. As many of you know, I hate labeling players as “injury prone”. I think it’s an unfair term a lot of the time.  Unfortunately, his age is not going to do him any favors when it comes to that designation though. Look for Mostert to receive a single year contract worth around 3 million dollars. I think it’s likely he moves on from the 49ers.

There are only a couple of Rams worth talking about, at least today. They are Sony Michel and Odell Beckham Jr. (OBJ). Ironically, both players were late additions to the Rams in 2021. Michel was traded from New England and Odell was claimed after being waived by Cleveland.  I find it hard to believe that either player would return to LA, even for one more season. Sony carved out a nice workload for himself this season, especially late in the season. I expect that role to mostly disappear though given the heroic return of Cam Akers. I expect Cam to, unquestionably, lead the Rams’ backfield next year, and I don’t think signing Michel to a 6 million dollar contract is great value (at least for the Rams).

OBJ is kind of in the same boat, but he is significantly older than Michel. Depending how the post-season goes for the Rams, I think they will let Odell “walk” in the off-season. They have a fantastic trio of receivers (Cooper Kupp, Robert Woods, Van Jefferson) without OBJ, and I just don’t see the monetary value of paying Odell between 10 million to 12 million dollars per year.

As you can see, the Cardinals are the team with the most notable free agents from the NFC West. I’m going to skim through these players fairly quickly, but don’t worry. I will give a full update on them at a later time and will always update you with any signing news.

First up is Zach Ertz. Ertz found a second wind in his career after several disappointing years with the Eagles. He finished the 2021 season as the TE5 in Dynasty Owner, and he looks to make close to the same amount of money he made on his last contract. I think a safe range to predict for Ertz is somewhere between 6 to 8 million dollars. I anticipate he will re-sign with the Cardinals, but their post-season success can also factor into the decision.

A.J. Green is another player that has found new life with the Cardinals. He wasn’t necessarily useful to many fantasy managers (especially Dynasty Owners), but he was a very good “real life” wide receiver. At 33, I expect that Green will not make any more money than his previous contracts. If you own him (and it looks like 85.8% of you do), you shouldn’t have to plan for many changes to his current salary.

James Conner is coming off of his highest touchdown total ever. He finished with 18 total touchdowns, and he was only 13 carries short of his career high from 2018. Conner’s relatively healthy season has likely earned him the highest contract of his life. I’m projecting that his new contract will be roughly 6.5 million dollars. I’m on the fence on whether he re-signs with Arizona.

A lot of the decisions around Conner will depend on what the team wants to do with Chase Edmonds. Edmonds had a statistically weaker season than Conner, but that’s mainly because of his usage. Conner was utilized more throughout the season, and he also received the majority of the “goal to go” carries. Edmonds should be a little cheaper to acquire this off-season despite being younger.

My favorite player to speculate on for this division is Christian Kirk. Kirk had a very efficient 2021 season, to the tune of 77 receptions, 982 receiving yards and five touchdowns. Given the wide receiver landscape, it would be very reasonable for Kirk to make north of 8 million dollars per year.

As I mentioned in my opening, I am rolling through these players and teams quickly. I promise you that I will speak on each of them (in detail) as the off-season rolls on. In addition, I will be bringing you breaking contract news every time an important contract changes.