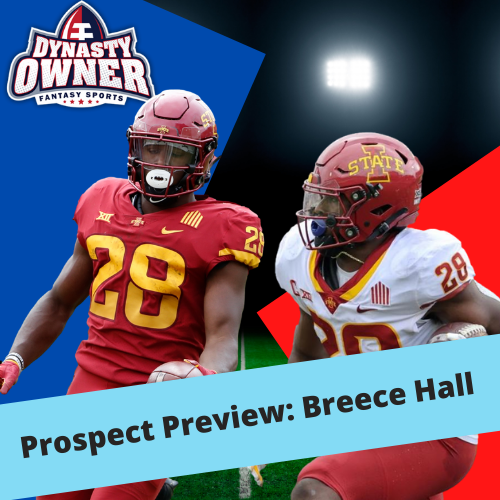 The prototypical running back by many standards, Breece Hall does everything well at the position. Unfortunately, he seems to fail to produce an elite talent that stands out among the rest of the position group. Being a well-sized, production heavy, do-it-all running back just doesn’t get the same ohhs nor ahhs as the speed freaks or the scatbacks.

The only unanimous All-American in Iowa State history, Breece Hall has been one of the top college running backs since the moment he stepped on the field as a freshman. In 2019, he made an instant impact with over 1,000 scrimmage yards for the Cyclones and has never looked back, amassing 4,675 scrimmage yards over three years with 56 total touchdowns. He has a true nose for the end zone with 46 touchdowns over the past two seasons. He’s not just a bruiser either, as he’s managed 20+ receptions in every season and had a career high 36 catches in 2021. A true do-it-all back for Iowa State, he seems pro-ready heading into the NFL Draft.

The combine could make or break the consensus on Hall. We’ve seen his ability to bulk up and handle a large workload, but we’ve also seen flashes of great athleticism and balance. The combine testing number, for better or worse, will push those who are on the fence. If Hall puts up a 40-Yard dash 4.55 or below, we likely won’t hear too many complaints. If he goes above that, and into the 4.6 range, we’re going to see people bashing him for a lack of speed and acceleration. According to his past numbers he should end up in the high 4.4/low 4.5 range, but if he misses that mark, the wolves will come out.

Hall is in the running to be one of the first running backs off the board come draft day. While I doubt that any running back sneaks into the first round, there’s always a chance for a team to fall in love with a player and make a move. I would expect Hall to end up somewhere in Day 2 of the draft, in the second or third round.

First and foremost, the Miami Dolphins, and whomever they choose to be their next head coach, could use a running back like Breece Hall. The team screams for a strong running game to go with Tua Tagovailoa ($7,568,859) and Jaylen Waddle ($6,771,498), and Hall is a running back you can work off of. With his high-volume frame, the Dolphins could better control games and use play action and a strong defense to win.

The Atlanta Falcons are another team that could use a runner like Hall in their backfield. Head coach Arthur Smith comes from Tennessee where he had the pleasure of working with Derrick Henry ($12,500,000), not that Hall compares 1:1 to Henry, but he would give that team the chance to have a true workhorse. If Smith is looking to extend the career of Matt Ryan ($30,000,000) at least one more year, then this move would make sense.