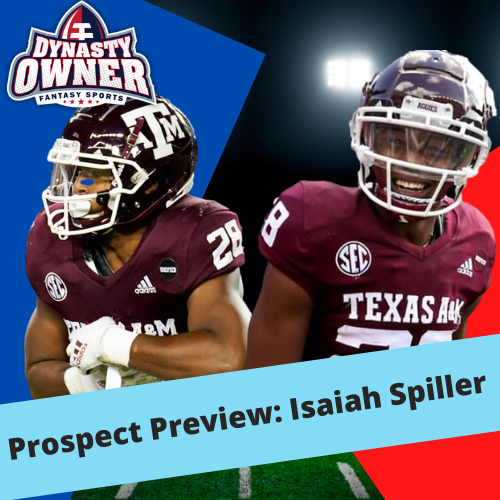 Spiller’s production during his three years in college has been impressive since the start, with every year totaling over 1,000 yards from scrimmage. He’s collected at least 20 receptions each season and has over 1,000 yards on the ground alone in the past two seasons. But here is the hang up, his stats haven’t really improved over his career. His yards per carry has stayed at a consistent 5.4-5.6 over his three seasons, while also finding the end zone less and less with each passing season. He rushed for 946 yards his freshman season, 1,036 yards as a sophomore, and 1,011 as a junior. That spread is pretty narrow. Spiller is absolutely a solid running back prospect, but has he grown the ability to do anything at an elite level? Not really.

Oftentimes, we are all about watching the 40-yard dash, especially for the offensive skill positions. Spiller’s will definitely be one to watch, but it’s not the measurable I’m super interested in this time around. Spiller seems like a good enough athlete, but I do wonder a bit about his stop-start ability and for that I’m going to be looking at his shuttle and 3-cone drill numbers to see how they compare to some of the other players in this draft class. If those numbers look good, I’m not going to really be too worried about whatever his 40-yard dash time ends up clocking in as.

Come draft day, Spiller is going to be lumped in with the other top running backs in the draft class somewhere in the 2nd round (35th pick). His upside as a receiver is going to make sure he doesn’t slip much farther than that. I don’t believe Spiller offers enough upside to jump into the back end of the first round, but you never know what could happen on draft day.

As far as a contract goes I think it could look pretty similar to Javonte Williams’ ($2,216,438) 4-year deal that he received after being selected early in the 2nd round. As always, running backs on rookie deals are nearly essential to a championship team build on the Dynasty Owner platform, making Isaiah Spiller a likely Top-5 pick in rookie drafts.

Isaiah Spiller is relatively “landing spot proof”. He’s not a one-dimensional back who needs a certain offense to thrive and his receiving chops would give him a role on just about every NFL team. But there are certainly some teams that would be ideal situations. One of those situations, as with Breece Hall, is the Atlanta Falcons. A team that looks to be screaming for a lead back, Isaiah Spiller fits the Arthur Smith mold of a thick running back. After seeing the Cordarrelle Patterson ($3,000,000) experiment work so well, Spiller would also be able to take on a large volume of receiving work out of the backfield. The Falcons have the 43rd pick in the 2022 NFL Draft and I think that would be a realistic spot for Spiller to end up.

Kliff Kingsbury is probably going through charts and film trying to figure out how to improve his offense in 2022, and he’s going to have a tough time with all of the impending free agents surrounding his quarterback. Spiller would be a great piece to build around in the backfield. Both James Conner ($1,750,000) and Chase Edmonds ($728,090) could be out of the desert in 2022 and Spiller could carve out a very nice lead role with the high-power offense of the Cardinals. With the team holding the 55th pick in the NFL Draft, I would not be surprised to see Spiller moving out West to hook up with the former Texas A&M Offensive Coordinator.