For everyone who was chasing a Dynasty Owner League Championship, they needed a few of the top point producers in their Starting lineup to make sure that they would win. Winning a League Championship was worth $100 million Dynasty Dollars for everyone and half of the total prize money pool for those in cash prize leagues ($600 in $1,200 prize pool leagues and $300 in $600 prize pool leagues). While it’s important to have the highest scoring players over the course of the season to help you reach the finals, the most important thing in the finals is having the highest scoring players for the week to win the Championship.

While it’s important to “start your studs” as everyone says, it’s also important to know if those “studs” have a bad match-up against a top rated defense, bad game script due to being overmatched and likely to run the ball less (this is mainly for RBs), or an offense missing key players such as having a backup QB starting, or multiple starting offensive linemen injured and out. While some players were immune to a bad week this season, think Cooper Kupp who scored double-digit Dynasty Owner fantasy points in all 16 games, Diontae Johnson who did it in 14 out of 15 games, or Jonathan Taylor who is on a streak of 13 straight games with double-digit Dynasty Owner fantasy points, others might have great overall stats and rankings, but be more of a “boom or bust” player or slumping at the end of a long season. Yes, I’m looking at you Mike Williams and Tyler Lockett. Can you trust those players to perform in the playoff finals or is it safer to put them on the Bench, avoid the potential “bust” and still get 25% of their points on your Bench if they go out and have a “boom” week? Thanks to the 2021 Chase for the Ring Champion Jeff for dropping that knowledge on everyone during the Livestream.

On the other hand, some players are finally hitting their stride at the end of the season and their performance over the past few games should be weighed more heavily than their season-long stats. Back in 2019, Dynasty Owners with Kenyan Drake on their roster likely rode him to victory as he was the Value Player of the Week for both weeks of the playoffs (Dynasty Owner playoffs were only two weeks long in 2019). He had been traded to Arizona midway through the season and retained the lead RB role despite the return of David Johnson from injury after the Cardinals bye that season. Drake ended up scoring 48.6 Dynasty Owner fantasy points in Week 15 (semi-finals) and 35.4 Dynasty Owner fantasy points in Week 16 (finals) and moved up to finish the season as RB15. He was clearly outside of the Top 24 RBs before the Dynasty Owner playoffs started but likely ended up carrying his Dynasty Owners to a League Championship if they had him in their Starting lineup.

All stats cited are based on the Standard Dynasty Owner scoring system as outlined in the updated Dynasty Owner Constitution. Standard Dynasty Owner scoring gives you .1 points for every yard rushing or receiving, .1 point for every 2 yards passing, 1 point per reception, 6 points for a rushing, receiving or passing touchdown and 2 points for a successful 2-point conversion (rushing, receiving, or passing). Interceptions or fumbles lost cost you 3 points, while a fumble that is recovered by the player’s team is a loss of only 1 point. Bonus points are available for 100-199 yards rushing (2 points), 200 yards rushing or receiving (6 points), 300-399 yards passing (1 point) and 400 yards passing (4 points). There is also a 3 point bonus for clutch scoring, which is a score that results in a lead change in the final two minutes of the 4th quarter or overtime. Kickoff and punt return touchdowns are worth 6 points for the player and kickoff and punt returns are worth 1 point for every 40 yards.

For the purposes of this article, ADP and Dynasty Owner rostered percentage statistics were current as of the morning of January 5th.

We practically have a repeat of what was written here last week. Our third Dynasty Owner Player of the Week for the 2021 playoffs and seventeenth overall for the season is a player who is winning the honor for the second time this year, but the first time winning it by himself: Ja’Marr Chase

Back in Week 7, Ja’Marr Chase split the Player of the Week award with his teammate Joe Burrow. Burrow was the solo winner of the Player of the Week honor last week and now, it’s Chase who takes the award by himself. Chase had 61.6 Dynasty Owner fantasy points in Week 17 (11 receptions, 266 receiving yards, 3 receiving TDs), the most points by any player in Dynasty Owner this season and third highest in Dynasty Owner history. The rarely obtained 6 point bonus for 200 yards rushing or receiving was the difference maker. His 266 receiving yards was the most by a rookie and 16th highest in NFL history. It was his second game in 2021 with more than 200 receiving yards and only the third one all season (Davante Adams had the other one). The QB throwing him the ball, Joe Burrow, had 51.3 Dynasty Owner fantasy points and was significantly far enough behind to give Chase the award on his own. Chase likely gave the League Championship to everyone who was chasing one and had him in their Starting lineup this week.

Congratulations to Ja’Marr on winning your first solo Dynasty Owner Player of the Week honor and your second overall honor for the 2021 season.

Jets rookie WR Elijah Moore was the team’s leading receiver until missing the past four games with a quadriceps injury and then because he was placed on the COVID-19 reserve list. In his place, Braxton Berrios has played very well and just moved ahead of Moore in Dynasty Owner fantasy points for the year (146.6 for Berrios versus 138.2 for Moore). Nearly half of those points (71.9 Dynasty Owner fantasy points) have come in the past four weeks, including a career-high 26.1 Dynasty Owner fantasy points (8 receptions, 65 receiving yards, 1 receiving TD, 12 rushing yards, 1 rushing TD, 55 return yards, 1 fumble lost) in Week 17 against Tampa Bay. He scored a pair of TDs making it his third game in a row with a TD and the first game of his career with more than one TD. Not bad for a player who was available in a majority of Dynasty Owner leagues when the playoffs started.

Congratulations Braxton on the first Dynasty Owner Value Player of the Week honor of your career. Since he’s in the final year of his rookie late sixth round draft pick contract, it will likely be his last one.

Players Who Should Have Been Starters This Week

Let’s take a look at those players who should have been one of your Starters based on their performance in Week 17. These are players who might normally be on your Bench or Practice Squad, but likely weren’t Starters in Week 17 when they should have been and helped your Dynasty Owner team win your League Championship, third place game, or the Loser’s bracket tournament.

Honorable mention to Cyril Grayson of the Tampa Bay Buccaneers and Kristian Wilkerson of the New England Patriots who both are rostered in few Dynasty Owner leagues (1.8% for Wilkerson and 0.6% for Grayson) and got elevated to the active roster for the Week 17 game. Both had been active in prior weeks, but had been dropped back to the practice squad. Grayson scored the game-winning 33-yard TD reception with 15 seconds left in the Buccaneers 28-24 victory over the New York Jets and ended up with 23.3 Dynasty Owner fantasy points (6 receptions, 81 receiving yards, 1 receiving TD, 7 return yards). Wilkerson had 20.2 Dynasty Owner fantasy points (4 receptions, 42 receiving yards, 2 receiving TDs) for the first receptions and TDs for the undrafted rookie WR.

Players Who Should Have Been on the Bench or Practice Squad

Dishonorable mention to Dalvin Cook of the Minnesota Vikings who wasn’t much better than Elliott with only 4.3 Dynasty Owner fantasy points (13 rushing yards, 3 receptions, zero receiving yards). SKOL Vikings were able to win the Chase for the Ring with Cook in their Starting lineup, but nobody else had as good of a team as they did. For the rest of the Dynasty Owners with Cook playing in their League Championship, hopefully you were able to overcome his lack of production or decided to start someone else at RB this week and put Cook on your Bench.

Without Lamar Jackson at QB, Marquise Brown’s production had declined in recent weeks, but not by a lot. What was probably more alarming to Brown’s Dynasty Owners than Jackson’s absence from the Ravens lineup would be the fact that Brown hadn’t caught a TD pass since the Ravens bye back in Week 8. He had six TDs in the first seven games of the season and then the TDs stopped. In Week 17, Brown had his worst game of the season with only 2.8 Dynasty Owner fantasy points (3 receptions, 28 receiving yards, 1 fumble lost). It was his first lost fumble, his fewest receiving yards, and tied for the fewest number of receptions of the season. Not a good week for Brown and for his Dynasty Owners to have him in their Starting lineups.

Knox has been a surprisingly good TE for Buffalo all season. Despite missing two games, Knox was in the Top 10 TEs and averaging nearly 12.0 Dynasty Owner fantasy points per game. He has 9 TDs on the season, which is tied with Mark Andrews and Hunter Henry for the most by a TE. None of that mattered in Week 17 as Josh Allen struggled throwing the ball, so Buffalo surprisingly leaned on their running game. As a result, Knox was only targeted twice, caught neither pass, nor ended up with a Blutarsky (0.0 Dynasty Owner fantasy points). The Falcons’ pass defense against TEs was rated around the middle of the pack in the NFL, so this wasn’t expected. Hopefully Dynasty Owners in the playoff finals with Knox on their team had another TE in their Starting lineup and sat Knox on the Bench.

There are no Week 18 Dynasty Owner games, so there will be no weekly preview article. As a result, we’ll have to recap my Week 17 Starter recommendations here and see how they worked out (Good, Bad or Just Ok):

This article marks the official end of the 2021 Dynasty Owner season for me. No more games to recap or preview and definitely no more recommendations. The NFL season still marches on with Week 18 and the playoffs, but in terms of Dynasty Owner, it’s time to turn the page to the off-season. It’s been a great season and a lot of fun bringing these weekly recap and preview articles to all of my fellow Dynasty Owners.

The rest of the Dynasty Owner content for this week will recap the year as well. Since there’s no more players to target in the Free Agent Auction on a weekly basis, Jay Pounds is going to take a look back at the year in the Free Agent Auction on Thursday with an article and video. On Friday, Matt Morrison – The Jerk will offer up an article and video with his League Winners plus Dynasty Owner Player of the Year awards.

Please read all of our articles, watch our videos on YouTube or listen to them wherever you get your podcasts. Don’t forget to follow all three of us plus Dynasty Owner on Twitter as well. Thanks to all of my fellow Dynasty Owners on a great 2021 season. Special thanks to everyone who has read my articles and watched my videos this season. I appreciate all of you. Have a great day! 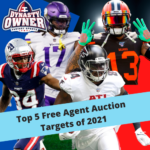 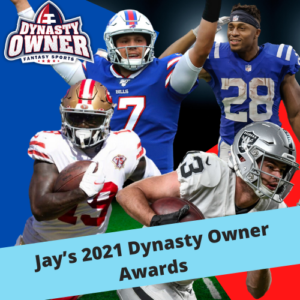 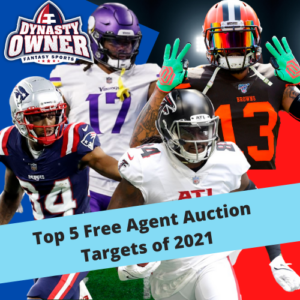