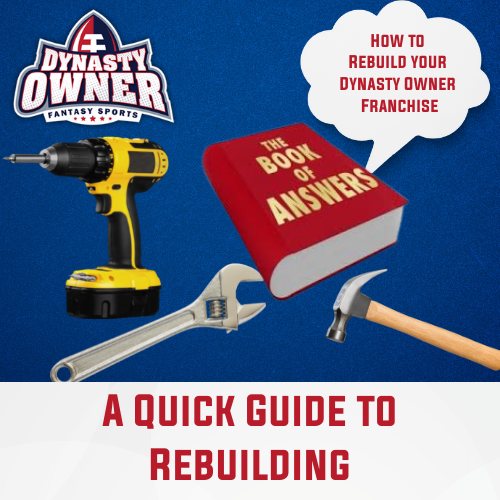 A Quick Guide to Rebuilding

Dynasty Owners welcome back to another week of rebuilding with yours truly. In last week’s article we covered fellow Dynasty Owner Bryan Peck’s team (@bbpckdancer) and the moves I would make if I had his team as my own. In the coming months I would like to do a lot more articles on Dynasty Owner teams that are in separate phases of a rebuild. I think this gives you guys the best idea of how to go about rebuilding your own team. If interested feel free to contact me on Twitter (@JayPoundsNFL) as I would love to do your team as well!

In today’s article I am going to do something that I will make a habit of doing every year near the beginning of the off-season and will essentially be a strategy guide to rebuilding and will end up as a two-part series. Today, I will cover several topics such as, when it’s time to rebuild and what to do first, how to choose your building blocks, who to trade, as well as what to do during the season. After we have all of that covered, I am going to dedicate next week’s article to rebuilding trades and the benefits of making them. I will also feature a bunch of trades from my good friend Bryce Williams (@BryceNFL) as he nailed several trades small and big that I think all rebuilding owners should try to make more often. I will include two of Bryce’s trades today as a little sneak peek into next week.

When to Start Your Rebuild?

In any dynasty format, one of the toughest decisions you will have to make is the decision to rebuild or continue trying to run at a championship. I, for one, do not like being even remotely close to the middle of the two scenarios and tend to go into rebuilds rather quickly after a startup. I like to try and maximize the value of players by getting a year of solid production followed by turning them into a draft pick or two, but it doesn’t always work out that way. One of the main reasons when deciding to start a rebuild is so tough is because many team managers show bias when looking at their own roster. Instead of trying to explain scenarios of when the time is right, I am going to explain why I decided to start rebuilding one of my teams 6-7 weeks into last season.

The first thing you should look at here on Dynasty Owner is, do you have enough fire power at quarterback to compete. If the answer is no and there is no clear-cut answer for you to obtain a top level QB without destroying your roster, the decision may already be made for you. The team in question was a startup draft where I selected Trevor Lawrence, Daniel Jones, and Teddy Bridgewater as my quarterbacks. Once it became clear Lawrence was not ready to compete at a high level yet, I decided it was time to rebuild. Obviously if you have a strong roster everywhere else then you can work around the quarterback issue, but for my team, injuries on top of bad quarterback play did me in for the season. Injuries will also be a huge part of deciding to start rebuilding because of the salary cap here on Dynasty Owner and the short shelf life of NFL players.

On my roster to start the season I had the following players get hurt, play poorly, or were due or had signed a new contract for 2022,:

This made my decision to rebuild fairly simple. In many rebuilds you will have a tougher decision as this many players will not get hurt on your roster but if a few do and you feel the year is lost look for these things when deciding on a rebuild.

If you do not have sound positive answers to these three questions, then it is likely time for a rebuild as was the case for my team. To sum everything up, if you have more than a couple question marks, older players, and upcoming free agents due big contracts on your roster, it is time to move into rebuild mode.

Who Should You Trade?

In a rebuild the easiest way to speed up the process is by making numerous trades to acquire young players and draft picks. As I did previously, I will also use my newest rebuild to cite examples of who to trade. The league in question is a tough league of fantasy writers and some of the better minds in the industry who do not partake in content, meaning a one sided trade is tough to find. One of my biggest blows in 2021 was the injury to DeAndre Hopkins making him a player I knew I had to trade. Hopkins has a salary of $27,250,000 and with a price like that he becomes extremely tough to trade, especially when banged up but it can be done if you get creative, even if it is for what you consider peanuts on the dollar. Aside from your expensive players the main players you should look to trade as soon as you decide to rebuild are your starting running backs because they do not last long in today’s NFL.

In the Writers league after I made up my mind that I was going to rebuild, the first thing I did was trade Nick Chubb a starting running back who signed a 3-year, $36.6 million extension ($12.2 million per year) in July that kicks in for the 2022 season. After moving Chubb, I had just C.E.H. left who was not worth trading at that time. I then moved on to my older receivers in Hopkins and Amari Cooper ($20,000,000) and surprisingly, I received solid value for both and will feature the trades in next week’s article. My main rule of thumb when trading running backs and receivers is to trade them after a certain age or based on their contract situation. It will also depend on how long you think your rebuild will last. In this scenario, we will use the typical three-year rebuild window and with that I will always trade running backs who have already finished their second season in the league. In the NFL, receivers tend to last longer than running backs and can be held into their second deal unless they are over the age of 26. Once receivers hit the age 27, I feel there is not enough of a prime window for a rebuilding owner to justify keeping them. As far as the tight end and quarterback positions you can hold on to them a little longer as they tend to age gracefully. To make a long story short trade everyone except players like Kyle Pitts ($8,227,624), Justin Jefferson ($3,280,701), Ja’Marr Chase ($7,547,410), or players like Edwards-Helaire ($2,705,393) who are still young and unlikely to net significant value in a trade.

Tips and Tricks for During the Season

I will use this section of the article as a guide into next week’s Creative Rebuilding Trades article. What I mean by creative trades is exactly how it sounds, not your typical trades. What you will not see is trades that are easy to make like a rebuilding owner moving off Austin Ekeler ($6,125,000) for a few first round picks. Trading in Dynasty Owner is extremely different from other dynasty leagues because of the salary meaning someone like Amari Cooper will not be easy to trade unless he is putting up Top 10 numbers at the receiver position. Even then, you will still need to get creative when moving him by taking on a bad deal.

Another way to be creative when trading is by picking up players from the Free Agent Auction like Devonta Freeman or Cordarrelle Patterson and moving them for future draft capital. In a scenario like this you have to see it for what it is, you are trading Dynasty Dollars for draft capital or whatever you get in return for the player you found in the Free Agent Auction.

Another thing I noticed Bryce doing that I love is scouring over the other owner’s teams and picking up the free agents they really needed. What this does is puts you in a situation where you have all the leverage as you have the guy they NEED while they only have something that you WANT! As I mentioned earlier my friend Bryce has nailed several of these trades and will be a huge part of next week’s article and you will get to see exactly what being active as a rebuilding owner will get you. An old quote I like to associate with rebuilding is “quiet mouths don’t get fed” meaning if you are not sending out trade offers you won’t be rewarded.

Sneak Peek into Next Week

As the title above says this section is a sneak peek into next week’s article but it will also help you understand some of the tips and tricks I talked about earlier. I want to show you two smaller, in-season trades to give you an idea of what to expect next week. In these two trades, Bryce’s team is the rebuilding owner while the other team is trading as a contender.

A nice small trade that gets the point across. In this trade, Bryce picked up Cam Newton off the Free Agent auction and turned him into what was projected to be a much higher second round pick along with a potential starting quarterback for years to come in Jameis Winston. Both Newton and Winston will be free agents in 2022. I will not spend much time on this trade at all, but you should ask yourself one question. What purpose would Cam Newton serve on a rebuilding roster?

What we have here is a small trade between two of my favorite Dynasty Owners on the platform, Bryce Williams (@BryceNFL), and Eli Padilla (@eli_pad1224). In this trade, the outcome makes sense for both users, but we are focused on what Bryce was able to get for a player we all knew wouldn’t start for long in Mike White. In all honesty, Bryce had zero need for Mike White on his roster other than the fact he may be able to get draft capital for him, which he was able to do.

In rebuilding there are so many factors that can affect how long of a process it becomes. As I mentioned earlier your building blocks are extremely important, but so are many other things. If you want to have a quick rebuild on this platform you will need to do some of, if not all of the things mentioned above. I know it can be hard to let go of some of these players, but it is a must when rebuilding. Be sure to look at and try to project where picks you trade for will be, surprisingly it’s pretty easy to see in a lot of situations because of expiring contracts and the cap. The last major thing I suggest is picking up all helpful free agents and use them in package deals or deals for low-end draft picks. If this is something that interests you, be sure to check out next week’s article Titled Creative Rebuilding Trades to give you the reasoning behind trades that have been made by real rebuilding owners.

Thank you all for reading. Be sure to check out the articles by the other Dynasty Owner writers Matt, Nate, and Steve throughout the week. Stay safe and good luck on your 2022 Chase for the Ring!