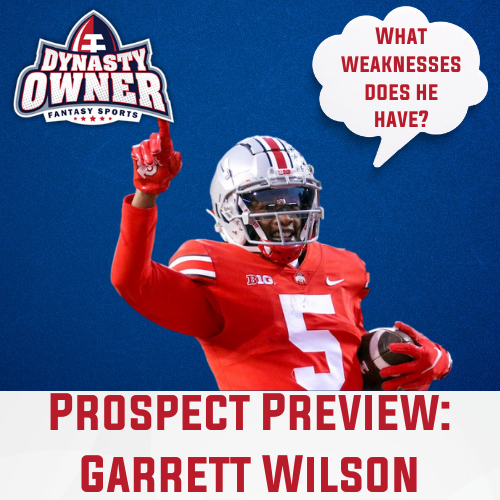 Viewed as one of the top of the prospects for this draft class since high school, Garrett Wilson has done nothing but impress throughout his time at Ohio State. Despite being in a crowded room of Chris Olave, Jaxson Smith-Njigba, and at one point Jameson Williams, Wilson has been able to shine and produce for the Buckeyes. Now as one of the top prospects in this year’s draft, do we really expect him to be one of the best?

Over Wilson’s first two years with the Buckeyes, he combined for 1,155 yards and 73 receptions. Good production for the opportunities that he had, and during that time he flashed that he was capable of much more. In 2021, he surpassed Chris Olave as the #1 receiver and finished with 70 catches for just over 1,000 yards while finding the end zone 13 times (1 rushing). In the last four games of the season (against Top 25 teams) he had 34 catches for 453 yards and 6 touchdowns (plus the 51-yard rushing TD), a great ending to his final season.

Wilson may not be the fastest receiver on the field, but he has plenty of athleticism for the next level. I’m very interested to see what his exact numbers are though, because as fluid and smooth as he looks, he doesn’t always show an elite level of speed and burst. If the 40-yard dash looks as good as his three-cone drill, I doubt anyone will have much to say.

A bona-fide first-rounder, I haven’t seen a single mock draft without Wilson being selected in the first 25 picks, often times within the Top 15. The draft capital will certainly be there, and there’s a good chance Wilson is the first receiver off the board come Draft Day. His pro-ready profile is going to make a lot of teams very excited about his chance at immediately making an impact on their offense.

His contract will likely look pretty similar to Devonta Smith’s ($5,035,348). This will give his Dynasty Owners a solid $5 million a year salary to work with, which could be a good value for the production they could likely get from him in his rookie year.

As with many of the top wideout prospects, Wilson is rather landing spot proof. He doesn’t need a specific style of offense to fit his strengths and most any coach will be able to use him.  But as always, there are some teams out there that could really use a player like Wilson. For example, with an aging Jarvis Landry ($15,100,000) and a now OBJ sized hole in the offense, Baker Mayfield ($8,170,745) needs some help. Wilson is an immediate impact player for that offense and would be able to help that team find some rhythm in the passing game. At pick 13, the Browns have quickly become the consensus partner for Wilson.

If Wilson ends up sliding a bit on Draft Day, a team that would be more than happy to scoop up some receiver value would be the New Orleans Saints (pick #18). Long gone are the days of Drew Brees and Sean Peyton, now the future is cap-strapped and full of unknown player personnel. If the Saints want to find a veteran quarterback and give him a weapon outside of Michael Thomas ($19,250,000), who has plenty of his own question marks, then Wilson would be one of the best possible matches. A great route-runner like Thomas, Wilson would be able to grow under the tutelage of Thomas, another former Buckeye, and eventually maybe even take over that role for the future Saints offense.