Anatomy Of A Dynasty Owner Trade 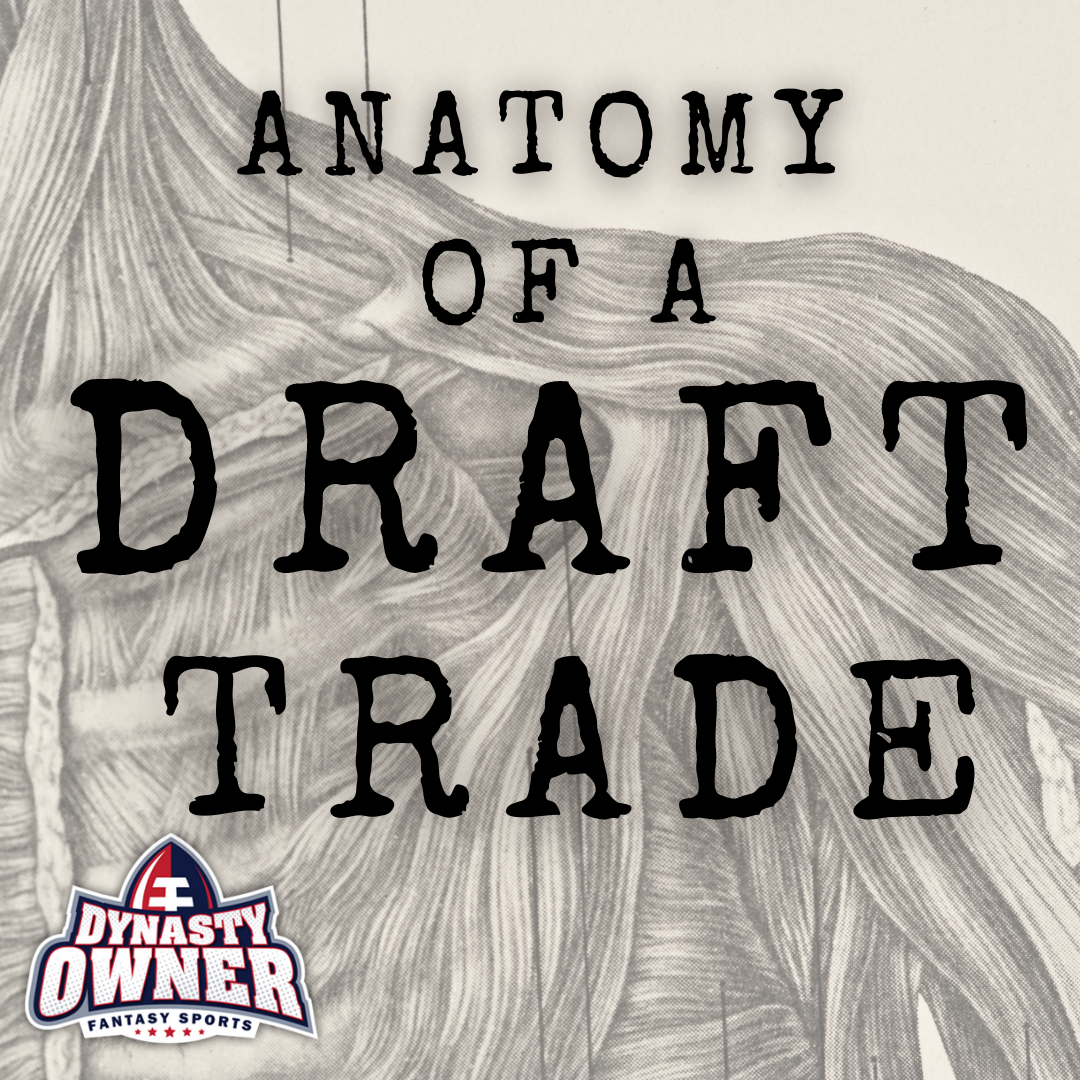 Anatomy Of A Dynasty Owner Trade

Hello all. Instead of talking about rookies, as has been the focus of the NFL and fantasy football owners since the NFL Draft, I wanted to switch gears and talk about something that is generally overlooked in fantasy football. That is trading.

It obviously depends on your dynasty goals, but I fully subscribe to the “win now” strategy. This is the same strategy that the Los Angeles Rams have used over the past few seasons as well. They, and I, believe that an established stud player is usually more valuable than a speculative draft pick. This was evident when they gave up two 1st round picks and one 4th round pick for Jalen Ramsey in 2019. This is a plan that I tend to follow. I will overpay for a player if I really want them. This isn’t to say that there is no limit for what I will pay for a player, but I don’t mind overpaying to get the deal done. Here are a couple of examples of trades that I pulled off over the past three days and my reasoning for making the trades. I call this the Anatomy of a Dynasty Owner Trade.

Tuesday afternoon, I traded three 2022 picks for Darren Waller.  They were the 2.01, 2.06 and 3.08. You may have your own views of the value of this trade, but this is how the trade talks progressed…

On Monday, I proposed to the Dynasty Owner with Waller to trade my 1.09 pick for Waller. This offer was thought about, but eventually declined. I don’t blame him for declining, but that was only my first offer.

Minutes later, the Waller owner came up with a creative solution. He said, “would you be interested in keeping that 1.09 & doing this instead? Waller for 2.01, 2.06 & 3.08?” I thought about it for a few minutes and realized that’s a very fair offer and one that I would accept.

Here was my rationale…Two 1st round picks (no matter what draft year) is too much for Waller.  A mid-1st and a mid-2nd is also just a little too much for Waller. But an early 2nd, mid-2nd and mid-3rd is a very fair value. This offer allowed me to continue to hold my 1.09 pick and have some hope for a young wide receiver in the rookie draft.

This is a good example of levelheaded negotiations in good faith. The other Dynasty Owner in this case is Forever Unclean from League 31625. He’s a good trade partner and one who I will trade with in the future.

Oddly enough, I made a trade for Deebo Samuel ($1,811,869) in the same league about eight hours later. I traded my 1.09 (the same one I talked about in the Waller breakdown) and a 2024 1st round pick for Deebo Samuel. Here is how the trade negotiations broke down…

Tuesday afternoon I got a cold offer. A cold offer is what I call trade offers that are proposed out of the blue with no prior discussions. I was offered Deebo Samuel for the 1.09 and a 2023 1st round pick. This offer intrigued me although I realized immediately that it was too much to give up for him. I would have considered this offer more seriously if there wasn’t so much uncertainty with Deebo and his current situation. The rumors are that he is unhappy with his pay and usage in San Francisco. If I had to bet, I’d say that he will be a 49er this season. I also declined because I have a great deal of respect for what the 2023 offensive class will be. While I am trying to trade a lot of my draft picks, I am not actively selling my 2023 1st round pick for less than top value.

Regardless, I declined the initial offer as it was too rich. I immediately countered with a reasonable offer of 1.09 and Terry McLaurin ($961,918) for Deebo. I didn’t really anticipate this was going to be accepted, but I tried. The Deebo owner responded that he is not a big fan of Terry (understandable), and he made another counter. The counter was 1.09 and a 2024 1st round pick for Deebo. I thought about it, and quickly accepted.

Many of you would say that I overpaid for Deebo, and I would agree that on paper I did, but I wanted him. He immediately makes my team better, and I trust that his contract situation will be worked out this off-season.

This was another pleasant transaction that ended as a positive interaction.

At the time of this writing, these trade talks were still on-going, and the trade hadn’t been finalized yet so I will not be disclosing the other Dynasty Owner’s name or league. Here is the story…

The conversations began when the Dynasty Owner with Mixon contacted me and asked what I wanted for this year’s 1.06 draft pick. I said I was willing to package a few picks for one of his running backs. I had a momentary lapse of reason as I offered the 1.06 and 1.13 for Mixon. As most of you know, the 1.13 is not tradable as it’s a bonus pick for the Loser’s Bracket tournament winner. Regardless, I think that the 1.06 and a late 2022 1st round pick is decent trade value for Mixon. I think the other Dynasty Owner would have accepted the deal if he could have. He then offered one of three choices…

I was not and still am not going to pay 1.06 and a 2023 1st round pick for Mixon. That’s just too much. The 1.06 and some seconds is fair value I think. I’d still be overpaying technically, but it’s close. As for the third option, I didn’t feel comfortable making that deal as there are way too many moving parts.

The point of this article was not solely to show you how I go about improving my Dynasty Owner teams. It hopefully showed some of you (who may not trade much) how a Dynasty Owner trade is composed and executed. I feel like trades are one thing that gets neglected the most in fantasy and dynasty analysis.

As always, thank you for reading. I would appreciate it if you followed @Dynasty_Owner on Twitter as well as subscribed to Dynasty Owner on YouTube.  Take care everyone and be safe.