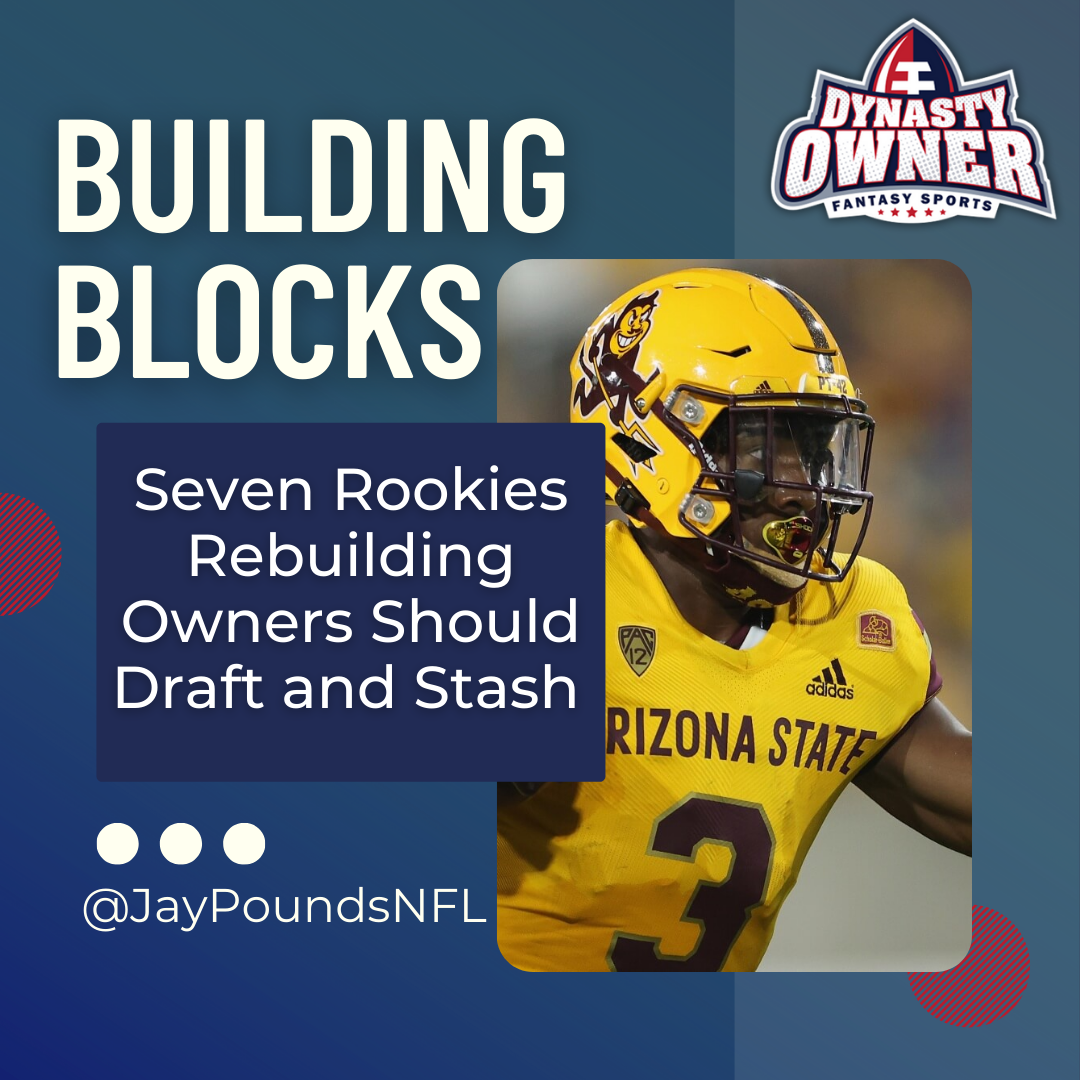 Dynasty Owners welcome back to another week of rebuilding with Jay Pounds! In last week’s article, we talked over some of my favorite potential building blocks from the draft and man was there some talent on that list. In preparation for the upcoming rookie drafts, I will be covering some more of the new incoming rookies this week with today’s article covering cheaper rookie options who will be considered stashes at the beginning of their respective careers.

The only criteria I used when selecting the list that you will see below is the player had to be drafted in the 3rd round or later with some being drafted well after that. The point of this list is not to find Day 1 starters, but players that rebuilding owners can comfortably hold onto for at least one full season before deciding their future.

I know I keep saying it is time to start preparing for the rookie drafts, but I will continue to do so. I feel this year will be more important than previous years because of how close some of these rookies are in terms of talent. There are also so many players to choose from. If you have any favorite stashes from the draft who I missed, feel free to let me know on Twitter.

Tampa Bay running back Rachaad White starts us off. White has a ton of work to do to jump ahead of the running backs ahead of him on the Buccaneers depth chart, Leonard Fournette ($7,000,000) and Ke’Shawn Vaughn ($1,188,999). White is a great physical runner, and it is rare to see him brought down on first contact. Similar praises can be given about his agility and quickness.

When you are rebuilding a dynasty team, you can never have enough talented running backs stashed and White fits beautifully into that category. Had White been drafted by Buffalo, he would have been the 3rd running back taken in most of the upcoming rookie drafts after Breece Hall ($2,253,693) and Kenneth Walker ($2,110,395).

I have to say, this is one of the most questionable players on this list, but I fully believe in Justin Fields ($4,717,989), so I am willing to take a shot on one, Velus Jones. Jones was a surprising pick for many reasons but none more than the fact he was a 6th year senior in 2021 and will be 25 years old before ever playing a NFL snap.

Another thing that has confused me at this selection is how similar his skillset seems compared to Darnell Mooney. Either way, the Bears believed in him enough to make him a pick they expect to play rather quickly. Jones is also a solid punt/kick returner which should help him see the field instantly as well as remain on the roster, which is something I like when stashing players.

While there is not much noise surrounding David Bell at the moment, he is one of my favorite players on this list if the future of Deshaun Watson is not torn apart by legal trouble. Bell does have players like Amari Cooper ($20,000,000), Anthony Schwartz ($1,215,756), and Donovan Peoples-Jones ($870,402) in front of him, but I see a scenario where he beats at least one of them out rather quickly to become the Number 3 guy on the depth chart. Bell is a physical specimen and had terrific college production while playing for Purdue.

By now we all know how well the Steelers draft the receiver position and Calvin Austin making this list is a product of just that. Austin has a ton of talent in front of him on the Steelers’ depth chart, but I see him as a perfect stash for rebuilding owners as he will have several mentors showing him the Steeler way. Austin is smaller, but an extremely explosive receiver and it would not surprise me a bit if the Steelers implemented a small package for him in Week 1. He should step into the Ray-Ray McCloud role right away and if he finds a way to make things happen with the ball in his hands, he could end up as a diamond in the rough this draft season. I know I am biased because he is a Steeler but here you are reading!

Heading into the NFL Combine, Kyren Williams was seemingly in the Top 5 of every draft board on the planet, and then he ran the 40-yard dash and finished dead last at the running back position. It caused him to fall significantly in the NFL draft. While there are several talented players in front of Williams on the Rams’ depth chart, I do see a possibility he could see significant playing time in 2023. Williams is a fantastic pass catching running back and I have no doubt Sean McVay will find creative ways to utilize him. Williams has all the tools necessary to produce at the NFL level and plays much faster than his 40 time shows.

I will be completely honest here; I had no clue who Bo Melton was until hearing of him on the Roto Underworld podcast. After hearing of Melton, I started looking at his film and was surprised at the talent of the Rutgers product. Melton is a smaller receiver, but he plays with an incredible toughness and is tough to bring down in the open field. Another thing that stood out while watching Melton’s film was his body control and ability to go up and get a ball despite his smaller stature. Melton is a long shot but one I have no issues taking a chance in the 3rd round of Dynasty Owner rookie drafts or afterwards by picking him up in the Free Agent Auction.

I had to throw at least one tight end on this list and thankfully I had 19 drafted tight ends to choose from. I chose Isaiah Likely because a friend of mine was very high on him heading into the draft. As I did with Melton, I dug into the tape on Likely and really liked what he displays on the football field. Likely is a physical specimen standing at 6 feet 4 inches tall and weighing 241 pounds. I know the Ravens have Mark Andrews ($14,000,000) already but who better for Likely to learn from then a star with a similar skillset. Likely is quicker than he looks and will be a nightmare for defenders to cover when he adapts to the speed of the NFL.

Thank you all for reading and be sure to check all the other content out here on Dynasty Owner. We have a great team of analysts consisting of Steve, Matt, Nate, and myself. Stay safe out there and good luck on your 2022 Chase for the Ring!