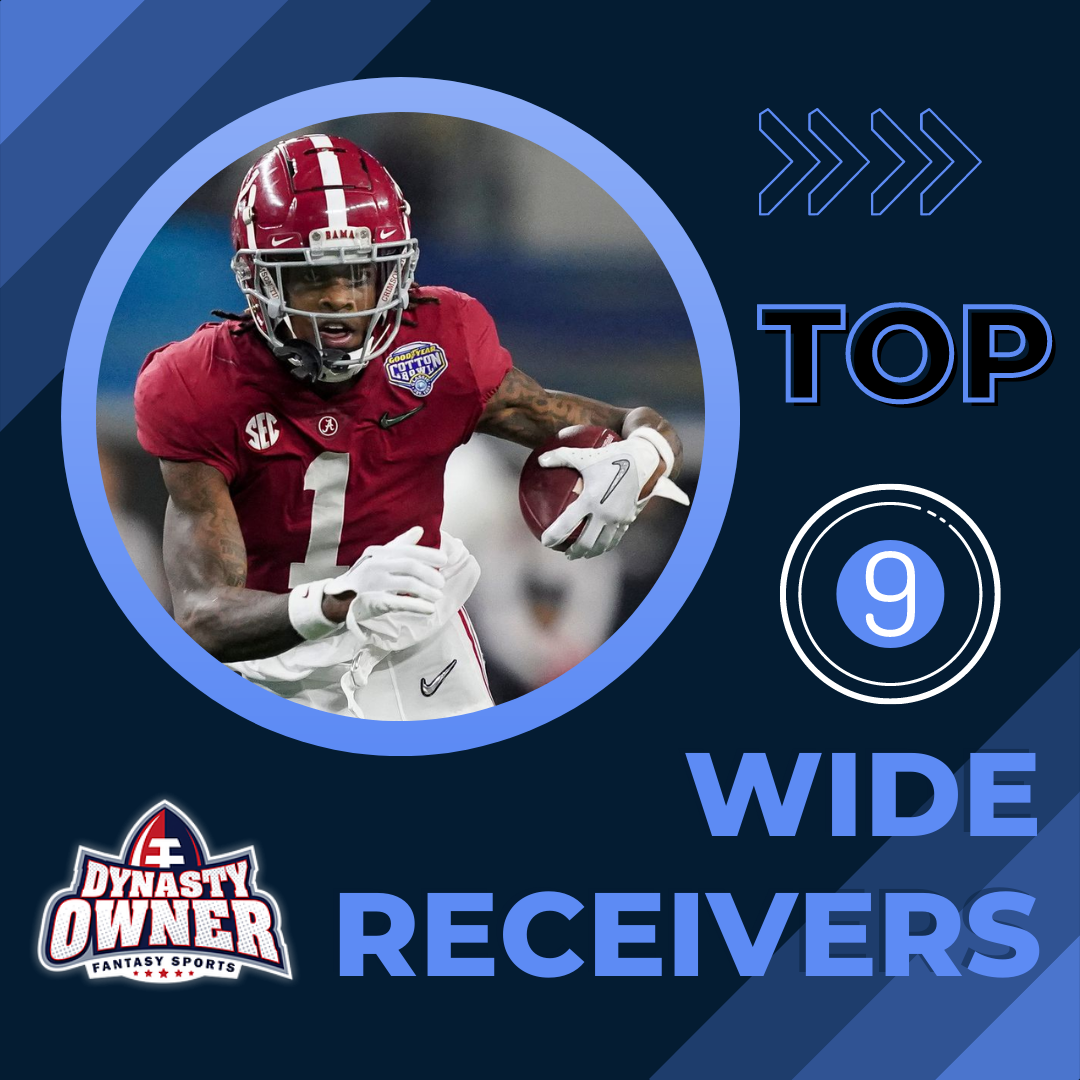 The year of the Wide Receiver. With six wideouts going in the first 18 picks, we have just seen one of the heaviest drafts at the position in a long time, perhaps ever. Between rookie receivers producing early and the new market price for second contracts, these players have a newfound value that is going to change the way we look at the position each draft season. No longer are teams waiting for the “third-year breakout”, but rather expecting immediate production from Day One. Throughout this year’s draft we saw talent flying off the board throughout the first two days as NFL teams tried to get their favorite players at the position. Now that it’s over, who should you be targeting at the WR position?

Throughout the pre-draft process many, including myself, compared Burks to A.J. Brown for his athleticism and physicality. The Titans likely had similar thoughts as they swapped the two players basically straight up. Burks walks into a wide open wide receiver room and despite him being a little more raw than some of the other prospects, he has the talent to produce as soon as he steps on the field. The Titans believe in Burks, and therefore I believe in Burks. My WR1 before the draft stays my WR1 after the draft.

If not for the injury during the National Championship Game, Williams would have been my WR1 pre-draft. With rumors swirling that he is way ahead of schedule with his recovery and the Lions trading up from the #32 pick to grab him, Williams isn’t falling very far in my rankings. One of the most talented receivers in the class, once he’s healthy he should be the most talented weapon on the Lions’ offense. It will be interesting to see how quickly he comes back, but long-term I expect Williams to be one of the top dynasty assets from this year’s draft class.

While the landing spot may seem a little crowded, the Jets’ offense looks like it’s coming together quite nicely. While the volume may be lower than a player like Drake London will receive, the efficiency could be much higher. Many Elijah Moore ($2,235,107) fans will tell you that he is the WR1 on the Jets, but I do believe Wilson will be the #1 target for that offense by the end of the season. Wilson is extremely talented and a true three-level threat making him perfect as the Z receiver for Robert Saleh’s offense.

The first receiver off the board, the Falcons pair the lanky athletic receiver with their big athletic tight end Kyle Pitts ($8,227,624). London will bring in $5.38 million a year on his rookie contract, making him a great value for the expected production he should see right away. The depth chart is empty for the Falcons and London should become the #1 target for Marcus Mariota ($9,375,000) for Week 1. I wasn’t a huge fan of London pre-draft but it’s hard to deny the incoming production with this landing spot.

One of my favorite players in this draft class, I’ve been preaching the talent of Dotson for months now and it was validating to see the Commanders feel the same way. As the 16th overall pick, this was best case scenario for Dotson and the landing spot is sneaky good. Many people will see Terry McLaurin ($961,918) as the WR1, and that should hold true in 2022, but McLaurin is in a contract year and if recent history is any indicator, he will be asking for a lot of money this coming off-season. That could put Jahan Dotson as the bonafide WR1 for the Commanders in 2023. Think about that next time he’s dropping in your rookie draft.

Now one of the more controversial prospects in rookie drafts, we are faced with the eternal question of talent vs landing spot. Luckily Skyy Moore is no chump! Moore is a talented early-declare receiver who produced big numbers at Western Michigan and now finds a great landing spot with the Chiefs. The depth chart doesn’t have a bonafide WR1 now with Tyreek Hill ($18,000,000) gone to the Dolphins, but I believe that production will be a group effort rather than a one for one replacement. Luckily for drafters, Moore has as good of chance as any to lead that group. High risk, high reward but overall, I think Moore has a higher floor than many give him credit for.

The Saints traded up to grab the other Ohio State wide receiver Chris Olave as the run on receivers started. With his only competition being an aging and oft-injured Michael Thomas ($19,250,000), Olave projects to be the solidified WR2 for the Saints. As long as Thomas is on the field, Olave’s ceiling is limited, but I do expect him to be efficient and put up solid FLEX numbers with Jameis Winston ($14,000,000) throwing the ball around.

The Packers finally gave Aaron Rodgers some young talent at the wide receiver position. Watson who played in green and yellow for the North Dakota State Bison, keeps his color scheme as the 34th overall pick. A big and athletic wideout, Watson produced great efficiency numbers in his final year in the FCS, but the transition to the NFL could be harsh. This is likely one of the riskiest picks in your rookie draft as Watson has all the physical traits to dominate in the NFL (4.36 40-Yard Dash, 38.5” vertical jump, 6’4” height, and 208 lbs.) but he’s going to have to get on Aaron Rodgers’ good side quickly if he wants to put up numbers his rookie year.

I had George Pickens highly ranked before the draft as there is a ton of talent in his film but between the ACL injury and the “red flags” that kept popping up in reports, he dropped into the second round. The Steelers were smart to pick him up, and this signals a similar situation to Jahan Dotson where the outlook is better for 2023 than 2022. Diontae Johnson is in his contract year, and this signals that the Steelers aren’t planning to pay to keep him around. If true, Pickens would have the chance take over as the WR1 for a sophomore Kenny Pickett and that is enticing. Pickens offers a bit of risk in a crowded WR room and with the couple questions marks that have surrounded his profile, but looks like a value in current rookie drafts.

Where’s #10? Don’t worry about it, there’s a large drop off after Pickens into the next tier of WRs. All of these nine players should be gone by the end of your Dynasty Owner rookie draft’s 1st round though, so make sure you’re paying attention if anyone drops into the second round.

If you want more rankings and analysis on this year’s draft class (and upcoming) make sure to follow me over on Twitter at @NateNFL as well as following @Dynasty_Owner. Make sure to also check out all the work Nate is doing with the Dynasty Rewind (@DynastyRewind).