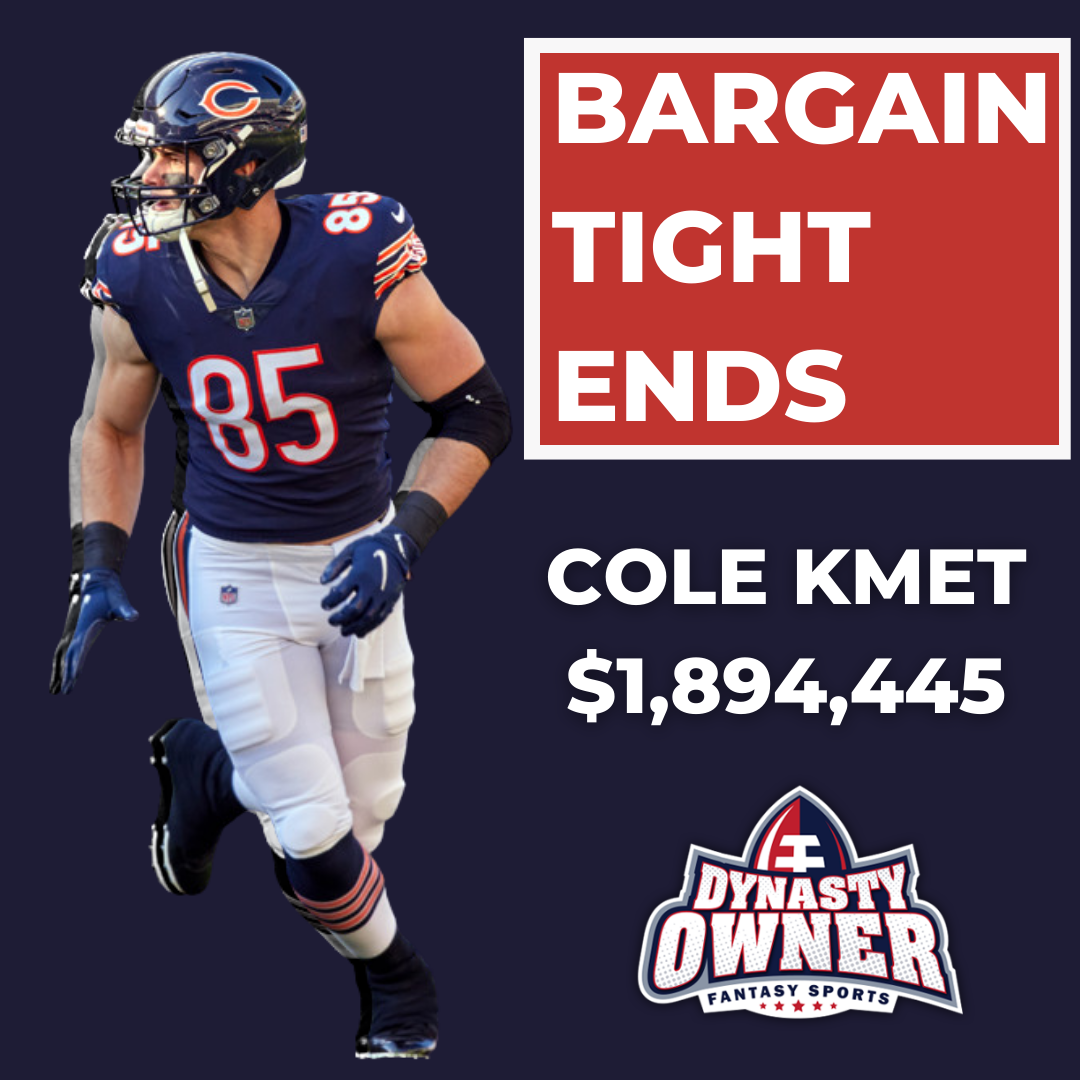 You likely don’t really care about tight ends. They may be the last priority when building your best lineup, but they matter. Finding a tight end that outperforms their current value or ADP can help make the extra difference that leads to championships. In Dynasty Owner, many of the top tight ends are on second contracts and can weigh down your finances, but by going after some of the players listed below, you can still find production without having to pay the premium salary!

Entering his third NFL season, Kmet is in line to see a career high in volume as well as likely have the best quarterback of his young career. All of this screams that he’s set up for success, but in the Dynasty Owner platform, his salary of just under $1.9 million makes him an easy addition to your team. Don’t get it wrong and think that Kmet is another lumbering safety-blanket. His 4.7 40-yard dash at 6’ 5” & 262lbs, put him in the top 20% of tight ends in both speed score and burst score (both formulas take into account the size of a player to level the playing field when discussing true athleticism). Combine that with the fact that he also got unlucky last year with zero touchdowns, and you have a player ready to explode. He’ll likely be the #2 target for the Bears offense this year behind Darnell Mooney ($894,263) and the production should follow with the number of opportunities headed his way.

A favorite for many draftniks during the build-up of last year’s NFL draft, Jordan’s fall during the draft to the 5th round surprised many. He did come in undersized at 6’3” and 245 lbs., but he was one of the best tight ends in all of college during his three years at Miami. At one time, he was in the same conversation as Kyle Pitts ($8,227,624), but coming into the NFL he was an under the radar Day 3 tight end. By the end of his rookie season he was seeing more snaps (40%+ in four of last six games played) and getting in on the action (19 targets in his final 6 games). Now with most of the off-season over, Jordan looks to be the TE1 for the Houston Texans. Davis Mills ($1,304,383) showed off enough talent to get another chance and looked to have a good connection starting with Jordan. Now Jordan will be a part of the passing game, as last year 40% of his snaps came from the slot. The talent is there, and it looks as if Jordan will get his chance in 2022.

After a couple years in Atlanta, Hurst now finds himself with the Cincinnati Bengals on a “prove-it deal”. A one-year contract to see if he can make an impact and there’s no better offense for him to join than the one headed up by Joe Burrow ($9,047,534). Hurst has been known as an athletic pass-catching tight end after a productive college career at South Carolina and a first round selection in 2018, but has never truly lived up to expectations. In Atlanta, he had flashes but was unable to find consistency in his first year there. When his second year came around with Falcons, he was pushed to the wayside after they drafted Pitts in the first round. Now as the TE1 in Cincinnati, he will need to find his form from 2020 where he brought in 56 receptions for 571 receiving yards and 6 TDs and finished as the 9th overall tight end in Dynasty Owner fantasy points.

If you want to take a swing on a rookie who could be on your waiver wire, this is the guy. He may not have the potential that some of the other tight ends in the 2022 draft class possess, but he may have the best chance to make an immediate impact for your team in his rookie year. Drafted in the 4th round out of San Diego State, his current competition is Ricky Seals-Jones ($1,187,500) and Jordan Akins ($1,085,000). Both of whom I do not expect to have a firm grip on the Giants starting TE job. Bellinger boasted a 4.63 40-yard dash at 6’ 5” and 250 lbs., but had very little production during his four years in college (68 receptions for 771 receiving yards in 30 college games). He has a chance to show that the blame was more on the Aztec offense than him. With the Giants’ offense full of unknowns, at his price Bellinger is worth a swing.

That wraps it up for a few choice Bargain Tight Ends. Thank you for reading. If you have any questions feel free to shoot me a DM over on Twitter (@NateNFL).