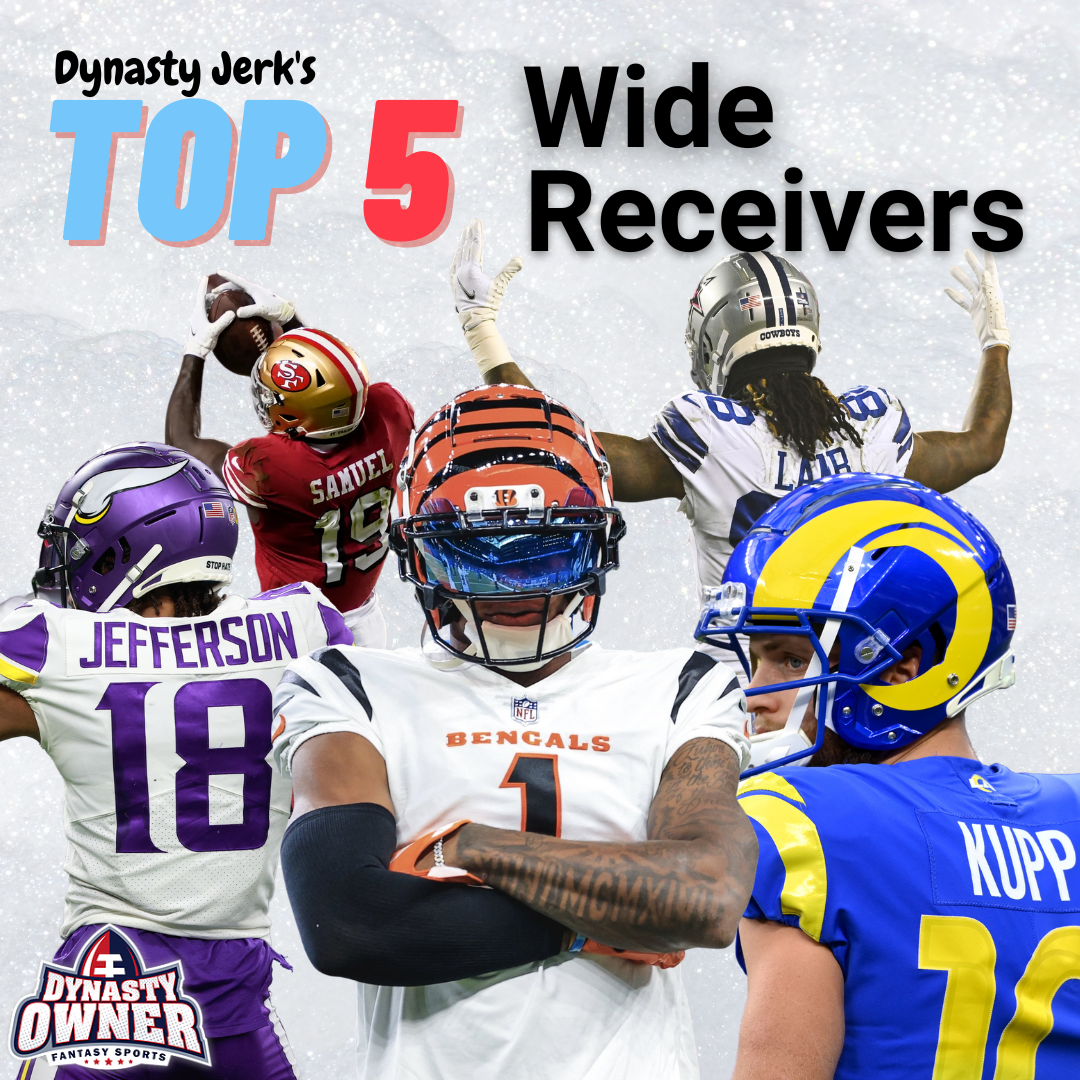 Hello all, and welcome to another Free Agent Friday. Today, I will be bringing you some news that has happened over the past couple of weeks. We had a few signings as well as one big retirement that took place. After that, I’m going to break down my Top 5 Dynasty Owner wide receivers. I think most of you have a pretty good guess as to who the top two will be, but the order may surprise you. But first, let’s start with some news.

Kupp received a massive extension a couple of weeks ago. This extension will not kick in until 2023 so Dynasty Owners with Kupp on their roster can breathe easy with his $15,750,000 contract this season.

McKinnon signing with the Chiefs is a depth addition. He is a more than capable backup/third string running back. This deal makes sense for the Chiefs to pull off especially since the contract is only $1,272.500.

Gronk has announced his retirement. This hasn’t been made official, but it should be believed that he will stick to his word. The retirement of possibly the greatest tight end to ever play in the NFL will affect many players other than Gronk himself.

This bumps Brady down a tad. It’s not that I think Brady will all of a sudden lose more than 10% of his production, but I don’t see a scenario where this is good for Brady. He is losing his most trusted remaining weapon in the NFL.

However, this is good news for Mike Evans, Chris Godwin and even Leonard Fournette to a certain extent. It’s good for these players from a volume standpoint. I expect Evans to be highly targeted as well as Godwin when he returns from injury. I also expect that Evans will be the primary red zone target for Brady in 2022.

Finally, it’s worth mentioning that nothing is set in stone here. We have seen our fair share of retirements and un-retirements in the NFL. While I don’t expect Gronk to play this year, I suppose nothing is impossible. Regardless, feel free to drop him if you are still hanging onto him. Holding an $8,000,000 tight end on the hope that he comes out of retirement is not a sound strategy. Drop him at your leisure while you can for free.

Last year around this time, I did a sneak peek of some of my rankings. Over the next couple of weeks, I will present the Top 5 from each major position. I talked about QBs and RBs in my previous two articles.  These rankings are subject to change, and they will likely do so many times between now and the start of the regular season.

The top two shouldn’t surprise you at all. Justin Jefferson and Ja’Marr Chase are two of the best and youngest wide receivers in the NFL. As you know, young means cheap. Here is the rationale I used for putting Jefferson over Chase…

In the end, I would not argue with you for long if you chose Chase over Jefferson especially considering their ages and contract lengths.

I like CeeDee Lamb a lot at the #3 spot. He still has two years remaining on his rookie contract, and he has just become the (for sure) Number one wide receiver on his team. There is a realistic scenario where Lamb finishes as the WR1 in total points at the end of this season. I’m not predicting that to happen, but it is not impossible. Barring injury, I think he gives you a floor of WR10. That high floor and high ceiling is exactly what I look for in a Top 5 wide receiver. His salary is more than affordable for the next two years. If I was in a Dynasty Owner startup draft this year, I would be taking Lamb as the third wide receiver off the board.

As I’ve said in previous ranking articles, the value a player’s salary gives you only goes so far. What this means is that at some point, production will trump salary (even the highest or lowest salary). In this case, Cooper Kupp jumps a whole lot of players who have a lower salary but also lower fantasy production. Kupp makes this list as the only player with a salary over 10 million dollars. Hell, he’s the only player on this list who makes more than 8 million dollars.

Yes, I truly believe that drafting Kupp over players like Deebo Samuel or Jaylen Waddle will be more beneficial for Dynasty Owners in the long run. Let’s say you get three more years of elite play from Kupp before his career is over…Those years are likely to put you in contention for at least one championship. That makes him worth it for me.

Finally, we have the aforementioned Deebo Samuel. Deebo would be at least one spot higher if his contract situation was determined. The uncertainty with him and the 49ers makes me pause when I include him in even the Top 5. The reality is that Deebo is such a unique and dominant player, that as long as he doesn’t hold out, he should easily finish as a Top 10 wide receiver for the next couple of seasons. His salary will increase next year, and that is concerning, but I go back to my previous comment.

That pretty much wraps up this article. If you have any comments about my current Top 5, message me on Twitter (@dynastyjerk) and let me know. I would appreciate it if you followed @Dynasty_Owner on Twitter as well as subscribed to Dynasty Owner on YouTube. Take care everyone and be safe.