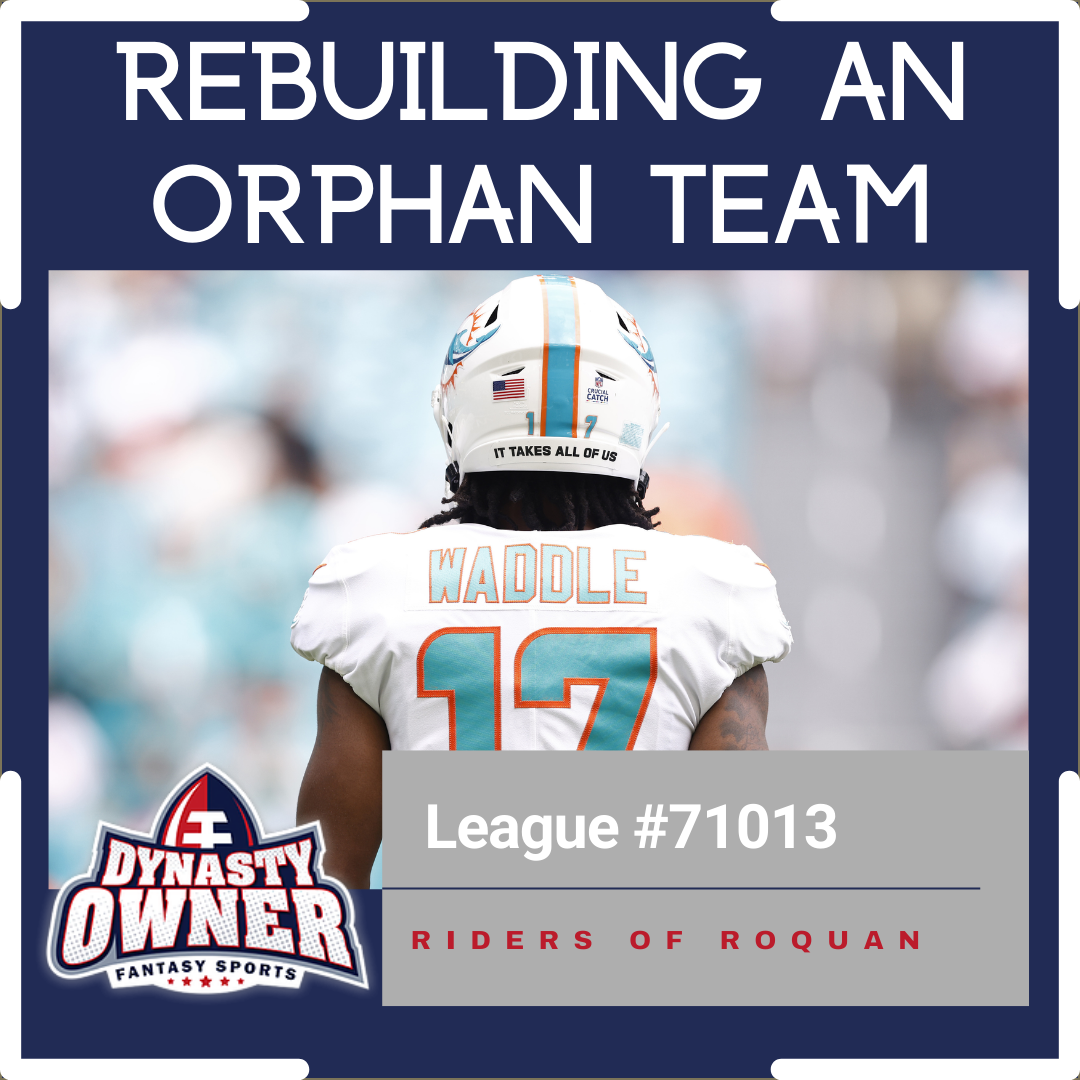 Dynasty Owners, welcome back to another week with your local rebuilder, Jay Pounds. As I mentioned last week, this is orphan team season, and I will be digging into another orphan roster this week for all of you to look over. Before we jump into things, as promised it’s also NFL countdown time. We officially have 44 days until kickoff, and I cannot wait folks. Let me know on Twitter how excited you are for football to start.

Two things I would like to cover quickly are the Fantasy Football Expo and the Livestream that Steve and I will be hosting on this Sunday, July 31st starting at 8pm. The Livestream will be a startup draft for our Dynasty Owner Podcast Listeners league (League #139634), and I look forward to hearing everyone’s input on the rosters. The Fantasy Football Expo is coming up on August 12th to 14th in Canton, Ohio and Steve, Tim, and I (plus more of our fellow Dynasty Owners) will all be in attendance. If any of you are going, please get ahold of me via Twitter and we can make plans!

While the Building Blocks on this team aren’t the greatest, they can be excellent role players if the new owner hits on their draft picks. The only player on the Building Block list who I could see finishing at the top of their position in the next 3-5 years is Justin Fields and that is mainly because of his rushing ability. Fields finished first in the NFL among QBs on runs of 10 yards or more in 2021 with 14 total. Fields was also excellent passing on designed rollouts which gives me reason to believe he can succeed at the NFL level in the right system.

Even if the next quarterback on the list, Kenny Pickett hits for the Steelers I don’t see him finishing inside the Top 10. He is a cheap starting quarterback and that will help you take chances elsewhere on this roster.

While Jaylen Waddle is still a fantastic Building Block with three years of rookie control left, he is not quite as appealing as he was before the Dolphins traded for Tyreek Hill ($18,000,000), but I still love the talent moving forward. With Mike McDaniel in South Beach, I believe the offense will be creative enough for both Waddle and Hill to have solid seasons. My bold prediction for the Dolphins’ receivers is that they both finish in the Top 24 receivers this season. I see a lot of 2021 Deebo Samuel from both players.

The last player on this list (Diontae Johnson) is a questionable one but I don’t think this is the time to trade him so I am building around him where I must and planning my cap accordingly. Johnson has two outcomes this coming offseason: take a discount to stay in Pittsburgh which will make him affordable for Dynasty Owners; or get a $20,000,000 plus per year deal to be the clear-cut Number 1 guy elsewhere. Either way I think it’s worth keeping him long-term on this roster at this point.

The Players to Trade list is rather small for this roster, but that is because there are several candidates in the Players to Hold category whose value should increase after the season starts and should be traded at that time. The big fish on this list is none other than Najee Harris. Harris had an excellent season in 2021 and has been a Top 3 pick in startup drafts to this point. I know it will be extremely tempting to keep Harris, but he will be 25 years old before next season starts, which is too old for a rebuild like this. I would trade Harris and swim in the draft picks. The other two players on this list are potential Hold candidates but I have them in this category because I would be shopping them after one good game, or even some training camp hype.

The Players to Hold list has some interesting names on it but none more intriguing than Tua Tagovailoa. I have Tua as a Hold because I am expecting him to take a big leap forward this season if he can stay healthy. Judging by the looks of this roster as currently constructed, I would hold Tua with the hope he has a great start to the season and then trade him. Tua should be set up for a ton of easy yardage and touchdowns this season with both Waddle and Hill in the fold. Anytime a quarterback on a rookie deal is playing well, you will get a ton in return for him.

The other big potential piece on this list is Elijah Moore. Moore is a player I am expecting to see a big jump from even though I don’t care much for his quarterback. If Moore lives up to his potential, he could very well end up as a building block for this roster at some point this season.

The last player on this list I could see paying big dividends is Brandon Aiyuk. Aiyuk had a fantastic finish to the 2020 season and had many of us fooled that he would be a star in 2021. Unfortunately, that didn’t come to fruition but with a disgruntled Deebo Samuel ($1,811,869) in San Francisco, it is a real possibility heading into the next couple of seasons.

The player who may not make sense on this list is Khalil Herbert but hear me out. I know Herbert will produce in some fashion this season, but with David Montgomery only having one season left on his deal with Chicago I am holding out hope that Herbert gets the keys to the Bears’ backfield come 2023. After showing he was more than capable in 2021, I feel a trade now could come with massive regret later. The last two players on the list (Kyren Williams and Tommy Tremble) are both excellent developmental prospects to hang onto and see what happens.

As always nothing too crazy here. If whoever takes this roster over wants to compete for a playoff spot, I would definitely keep Kirk Cousins, but in a rebuild I am cutting him and using the cap space to take on bad contracts for draft picks in season.

What I Would Do

After digging into this roster, I have concluded it is time to blow the roster up and build for the future. Dynasty Owner is all about having the top rookie contracts paired with the right veterans on bigger deals and this roster is heading in the opposite direction. I see a real possibility that if this roster were to stay intact, it would have average players on rookie contracts, and I don’t see that pairing well with someone like Diontae Johnson on his second deal. Luckily for whoever takes this roster over there is a path to a speedy rebuild by trading Najee Harris and Tua (eventually) as well as some of the others on the Players to Hold list if they play well. The main two things I would look to add to this roster before the 2023 season gets here are a tight end and receiver who is at least projected to be Top 5.

Thank you all for reading and be sure to check out our other articles by writers, Steve, Matt, and Nate. Stay safe out there and good luck on your 2022 Chase for the Ring!