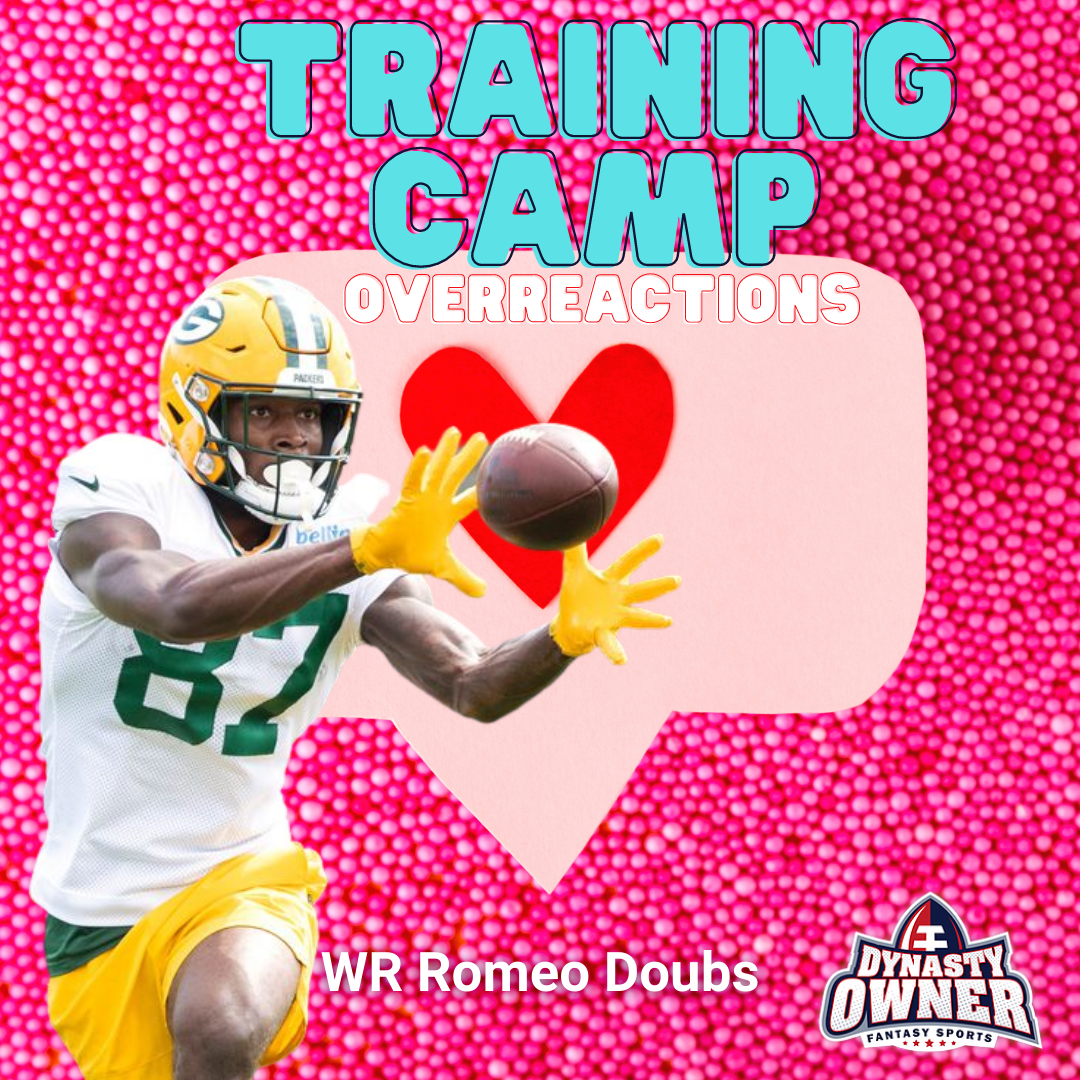 We are nearly through two weeks of NFL training camps, and everyone is loving it. Football is back and nobody can get enough of the hype coming from each team’s beat reporter. Some players are starting to stand out and once they get their names in the headlines a couple days in a row, it might be worth paying attention. Of course, a word of caution, every year players stand out in training camp, and we start creating expectations that they never come close to meeting during the NFL season. With over a month till the regular season, don’t overreact just yet!

Romeo Doubs is the Packers WR1?

Christian Watson ($2,310,258) has yet to get on the field for training camp, and in his absence Doubs ($1,085,979) has taken his place as the most exciting rookie on the offense. Consistently making plays down the field, he’s even managed to grab the attention of Aaron Rodgers ($33,500,000) who said, “Every single day … there’s been at least one kind of ‘wow’ play for him, and that’s kind of rare for a young guy like that. Now we’ve had some guys over the years kind of do that, but they’re all in the top 10, I think, in the Packers’ receiving history.” Rodgers isn’t one to hand out praise easily so this certainly should be grabbing your attention. But is the juice worth the squeeze?

After all Doubs is just a 4th round pick out of Nevada (overall #132 pick). I’ve been a big fan of Doubs since the 2021 college football season, when he showed off great physicality and playmaking ability with big-armed quarterback Carson Strong ($853,333). Doubs is definitely worth taking a shot on and trying to acquire as depth on your Practice Squad. He won’t be the #1 target but in a wide receiver room full of unknown, take a chance on the guy with Rodgers’ attention.

The story and drama around the 49ers and Trey Lance ($8,526,319) goes back to way before this year’s training camp, but with Jimmy Garoppolo ($27,500,000) finally on the way out, head coach Kyle Shanahan has fully committed to Lance as the face of the franchise. With all the expectations from local and national media the eyes have been on his training camp statistics. There have been some ups and downs, but overall, the talent is obviously there, and he is showing improvement from last year’s camp. The biggest caveat to Lance’s training camp is the hype surrounding the 49ers defense. They are being heralded as one of the best in the league, if not the best. Lance is going through the ringer on a daily basis, and as they say, “Iron sharpens iron.” There should be no judgement passed for Lance until we see him on an NFL field with all of his starters.

Michael Thomas is Back?

Yes, I do believe that slant boy is back. Michael Thomas ($19,250,000) has been MIA for the Saints over the past year (or two) and questions have been swirling about not only his physical health, but also his mental health. But Thomas is back on the field competing in training camp, and so far the reports have been stellar. Thomas apparently looks like his old self, making quick cuts and catching everything thrown his way. He’s not a full-go yet, but with plenty of time until the regular season, Thomas will be able to take his time. There’s no denying his talent, just his availability and it looks like he’s on the up and up. With gunslinger Jameis Winston ($14,000,000) as the quarterback for the Saints, I believe the fantasy upside that Thomas provides makes him worth the risk. We likely won’t know until Week 1, just how “back” Thomas is, but he’s on pace to make a major impact this season for his team.

Stay Away From The Eagles Backfield!

In fantasy football, sometimes the way to win is to avoid the unknown. Sometimes it’s less about who to pick, and more about knowing who not to pick. In this instance I’m saying stay away from any member of the Eagles backfield. Yes, Miles Sanders ($1,337,544) is a talented running back, but try telling Head Coach Nick Sirianni that. Sanders has said himself to not pick him in fantasy football this year due to the offense he’s in. A couple weeks later, we see that in training camp, he’s running with the 2s while Kenneth Gainwell ($953,882) gets some of the carries with the 1s. While both are sure to split the load, Jalen Hurts ($1,506,292) will also get his share and then a third or fourth running back will likely get their hands in there as well. Sirianni is unlikely to commit to giving Sanders a large amount of volume, so it is best to just stay away from this whole situation in 2022.

Short story here, Burks ($3,592,398) wasn’t prepared for the NFL’s level of conditioning and combined with his asthma got held back a bit to start off Organized Team Activities (OTAs) and mini-camp. Since training camp has started, there has been no issues and the coaching staff has even said themselves that the issues are in the past. Burks has since impressed in training camp, especially in 1v1s where he has used his physicality to win. This bodes well for the Titans who have put the capital into Burks to replace their former receiver A.J. Brown ($1,413,092). This is a role that Burks should be able to step into right away and produce significant fantasy numbers and efficiency. The buy-low window is closing, but you still may have your chance if you’re looking to add another stud young wideout to your team.