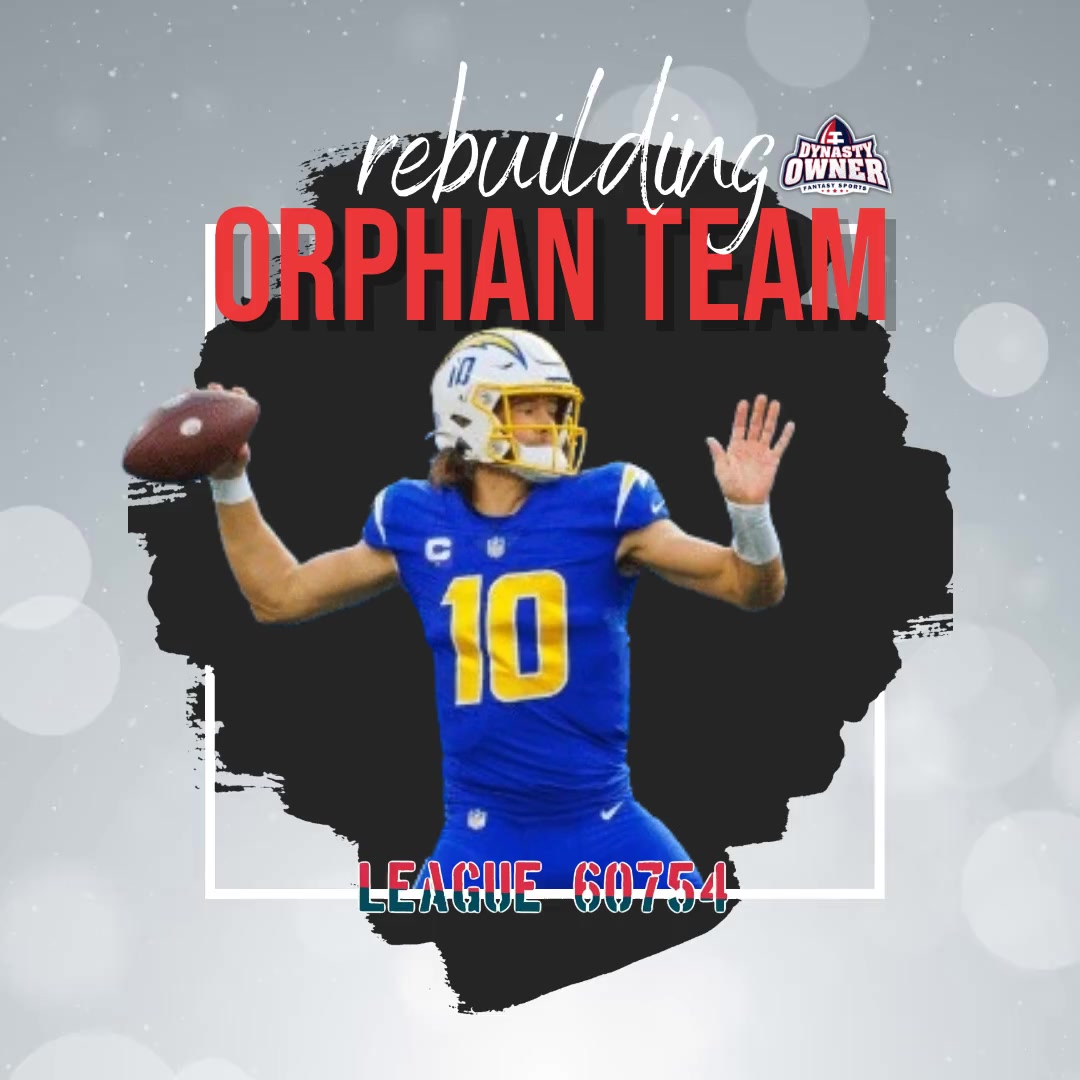 Dynasty Owners! It’s rebuilding time again but before we get into today’s article, we have a few things to cover. First and foremost, the countdown! We officially have 36 days until the NFL season starts and training camps are now all underway. The biggest news so far has been the Deshaun Watson suspension and four of receivers from the 2019 draft class getting huge paydays. The four players to earn new contracts were DK Metcalf, AJ Brown, Deebo Samuel, and Terry McLaurin and they will all impact Dynasty Owners with those players on their roster greatly come next season. Either way it’s great to have some real NFL news.

In today’s article, we will be covering another orphan team and whoever takes this roster over has their work cut out for them. Before we get into the meat and potatoes, I would like to encourage everyone to check out the startup draft that Steve Van Tassell and I did over the weekend with 10 other Dynasty Owners for our Podcast Listeners League (#139634). If you happen to check it out, feel free to let me know how you think my team looks to start the season via Twitter.

As you can see the Building Blocks for this team are rather limited outside of Justin Herbert, but Herbert is always a great start. In Dynasty Owner, just like the NFL, quarterbacks are of the upmost importance if you want to win. I have tried the strategy of cheaper middle of the road quarterbacks, and it just has not worked out. I am building this roster around Herbert 10 times out of 10, even with a new contract looming.

The second player on this list, Chase Claypool is one who has a few question marks surrounding him but there is no doubt the talent is there, If Pittsburgh decides not to re-sign Dionte Johnson, it’s a real possibility Claypool becomes the Number one guy for the Steelers.

Christian Watson is the last Building Block on the list and has the potential to become something special. The major issue with Watson right now is that he had a minor knee surgery leaving him unable to practice. Luckily, Watson is not needed this season as this is most certainly a roster that needs to be rebuilt.

The Players to Trade list is what will decide if this roster is going to be a quick rebuild, or if it will need a full 3–4-year plan. The first player on this list I would be looking to move is A.J. Dillon. I know there is a ton of hype and what seems to be the expectation that Dillon will become a top end running back this season and that is exactly what I am selling, if this were my roster, Dillon would be gone before the start of the season. Every year Aaron Jones gets the fade treatment and every year he proves us wrong and I’m willing to bet history will repeat itself at least another season.

Another player who should fetch a solid return is Nick Chubb, but I do believe whoever makes this deal will likely have to take on a bad contract to help the opposite owner open cap space. The running back position is extremely thin right now and I would do everything I can to use that to my advantage when trading a big contract running back like Chubb. Find a contending roster that is slim at the position and find a way to make a deal happen.

The quarterbacks listed above (Marcus Mariota and Drew Lock) are also excellent trade candidates, but the return will depend on the timing of each deal. With Drew Lock I would hold onto him and see if he ends up winning the starting job in Seattle, which will increase his value by a lot. Marcus Mariota, on the other hand, should be a player who is moved immediately as I believe he will be pulled once the playoffs are out of reach for the Falcons.

Similar to the Players to Trade list, the Players to Hold list also has a few intriguing names. My favorite player in the list is Miles Sanders, though I have been a Sanders truther since he was at Penn St. Sanders has all the talent in the world and was extremely effective when he received opportunities in 2021. If Sanders earns a decent workload, I see no reason his trade value won’t increase.

The other two  running backs I would like to touch on are Melvin Gordon and Ezekiel Elliott. Gordon is the easier Hold here as he is not eating up a ton of cap space like Elliott is. Elliott on the other hand is a more questionable Hold but with the running back position being so scarce I believe Zeke will be able to be flipped if he plays well to start the season.

Finally, we get to the most fascinating player on the list and that is Baker Mayfield. Mayfield as you all know will be getting a fresh start in Carolina and with that comes the best playmakers he has ever had around him. If Mayfield comes out and plays well, you should be able to move him with his salary being so low for the position.

In case you missed the last couple of articles I have introduced a new category to fit some of the more in between players like Brevin Jordan. Jordan in my opinion can become a top-level tight end and be a Building Block for your roster, but it just did not feel right placing him in there just yet. I know the same can be said about Christian Watson but if he plays the role they drafted him for this season. he could be an instant star. Outside of Jordan I believe Matt Corral has the best chance of turning into a capable NFL player but it most likely will not be this season if that is going to happen. The last guy I want to talk about is Harrison Bryant. I know this may be a confusing one with the addition of David Njoku (and I love Njoku) but the experts I hear around the Cleveland area just love this kid and that’s enough for me to hang on and see what happens.

Overall, this team is not as bad as it initially looked. The Players to Trade and Players to Hold categories have plenty of talented players who will increase the draft capital for this roster. I see no reason that whoever takes over this team can’t walk away with several first round rookie draft picks, though it will take some wheeling and dealing. I do believe this is a roster that will need to be active if a quick rebuild is in order. My best advice for the new Dynasty Owner of this team is to be patient but efficient when trading and try to pick up as many producing free agents as possible to flip for future value.

Thank you all for reading and be sure to check out our other content from Steve, Nate, and Matt. Stay safe out there and good luck on your 2022 Chase for the Ring.