I hope you took the time to read my article last week. If not, go back and read it to get some background for this article. Here is the main takeaway I want everyone to have from this article series.

“First, these articles hopefully give you a new way of looking at some of these players. We, as Dynasty Owners, have many different biases when it comes to fantasy football (Hometown biases, previous season biases, injury biases, trade biases, etc.). In these articles, I’m going to be giving you mainly the stats and facts with a little opinion. I think you may be surprised with some of the outcomes.

Second, and most importantly, I think seeing these articles is a lot of fun. I love writing them, and I hope you enjoy reading them.”

I want to give full disclosure for this article. I wrote almost all of it before Week 4 occurred and it was updated with stats through Week 4. As I’ve said in the past, a one game sample size does not sway me. I stand by what I have written.

The question is…Who would you rather own in Dynasty Owner?

Let’s talk about Alpha. He (and Bravo) are older running backs. The 27 year age for running backs tend to be their “over the hill” age. Of course, this is not always the case, but just on average. Alpha had a solid 2021 season with 15.3 fantasy points per game. This was good for RB8 for the season. And it looks like he’s improved those numbers slightly so far this year through four weeks. He and Bravo have salaries between 5 and 7 million dollars per year.

Bravo had a superb 2021 season. He had 21.55 fantasy points per game and finished as the RB2. Through three games, his production had been cut by a third and even with a great Week 4, he is still 10 percent off his 2021 pace. Much of this reduction in production comes from the fact that he scored fewer touchdowns this season (three in four games). He had 20 touchdowns in 16 games last year. The fact that really piques my interest from this stat line is that he has 27 receptions through four games. That is a blazing hot pace of 115 receptions for the entire year.

So which player would you rather have so far? Do you want the higher upside player based on last year’s production or would you rather take the more productive player this season? Also, those 27 receptions in four games is mighty juicy.

What if I told you that Alpha is 31 and Bravo is 27. Would that make a difference? It definitely should. As I said, 27 – 31 is getting up there in age for a running back, but there is a massive difference between 27 years old and 31 years old.

What if I told you that both players have seen increased competition for touches in their respective offenses. Alpha has seen more competition in the passing game, which is why his receptions are so low this year (4). In contrast, Bravo has seen a great deal of competition for rushing attempts as he has only 45 in four games, while other RBs on his team have received 36 rushing attempts so far this season.

Before I tell you the players, make a final decision on which player you want based on this limited information…

I believe that most of you picked to have Ekeler on your Dynasty Owner roster over Patterson based on the data, but it may have been closer than you expected. Blindly, the age difference put Ekeler ahead especially in a dynasty format. All these stats are true though. Patterson was RB4 after three weeks and is RB11 now. Ekeler was RB13 after three games and RB3 after four games. Despite the addition of Drake London ($5,383,617), Patterson is averaging just a few more (0.6) Dynasty Owner fantasy points per game than in 2021. Ekeler is averaging 2.35 fewer Dynasty Owner fantasy points despite the 27 receptions.

Most of this was written prior to Week 4 and the stats have changed. Your opinion of one or both of these players may have changed as well. However, Cordarrelle Patterson is outperforming nearly everyone’s expectations, and he has been doing so for over a year now. He is a locked-in RB1 in Atlanta, and he’s a running back who I would want to put in my Starting lineup no matter the matchup. Ekeler is still that, but Dynasty Owners need to start tempering their expectations. If you drafted him to be a workhorse, 20 touches a game running back with 20 touchdowns, you are likely not to get that. The emergence of Joshua Kelley ($1,018,835), Sony Michel ($1,035,000) and Zander Horvath ($934,252) have put a wrinkle in that Ekeler’s Dynasty Owners probably didn’t predict. This isn’t even taking rookie RB Isaiah Spiller ($1,018,835) into consideration yet.

Clearly things changed between Weeks 3 and 4 as Ekeler had an amazing game against the Texans with 33.9 Dynasty Owner fantasy points (60 rushing yards, 6 receptions, 49 receiving yards. 3 TDs). Likewise, things changed for Patterson when it was announced he would be placed on Injured Reserve (IR) and miss at least four games. As I stated at the beginning, a one game sample size does not sway me. I stand by what I previously stated.

Temper expectations for Ekeler. He may not finish as a Top 5 running back, but his floor should be around RB15.

Continue to start Patterson, but I wouldn’t expect him to remain in the Top 10 for the entire season with the missed games. And obviously, don’t start him until he returns from IR.

I thank you all for reading and for continuing to support Dynasty Owner. Wide receivers are on the docket for next week. 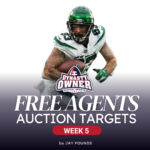 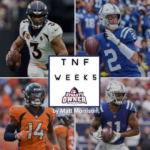