Dynasty Owners, welcome back to another edition of my Monday Night Football preview for the 2022 NFL season.

In tonight’s game there will be numerous things I will be looking for, but thankfully for you I will only highlight a few of them here. The main thing I have looked for in Rams’ games since the start of last year and will be again tonight is where is Cooper Kupp ($15,750,000) is at. Kupp is seemingly thrown to every single play the Rams are on offense and the sheer amount of work he gets from the receiver position is, well, jaw-dropping to say the least. Another thing I will be watching for on the Rams’ side of the ball is the running back position and how carries are split between Cam Akers ($1,543,258) and Darrell Henderson ($1,053,001). Henderson looked like he would be involved a ton after the first 1-2 weeks of the season, but Akers has taken over as of late. On the 49ers’ side of the ball, I will be watching their stud receiver Deebo Samuel ($1,811,869) as he has been every bit as fun to watch as Kupp has over the past season and some change. The last thing I will be paying close attention to in tonight’s game is George Kittle (15,000,000). It seems like my first born was not alive the last time Kittle was dominant, and I am beginning to wonder if we will ever see dominant Kittle again outside of a few big games here and there. It really sucks when a talented player like George Kittle starts to become a what if after numerous injuries.

Remember back to last week when I said we would see an old school approach to the game? Well, this week expect to see a similar final score in a more modern-day defensive game. The teams will be able to move the ball outside the 20s, but touchdowns will be tough to come by in this heated matchup.

While I am not expecting a shootout by any means this was an easy choice. Stafford will toss a pair of touchdowns and finish just above his projected point total.

Cooper Kupp already has 18.6 Dynasty Owner fantasy points (DOFP), and the game hasn’t even started. He is always an easy over!

Allen Robinson has been a huge disappointment thus far and I don’t see it getting much better in tonight’s game. Another 2-3 catch, 30-yard performance is likely on the way.

Higbee has been respectable this season, but the Rams should have kept Gerald Everett ($6,000,000). I just had to mention Everett in this spot and because of the bad juju I just put forth, Higbee goes under his projected total tonight.

I have Jimmy G going under in tonight’s game and it’s not because he will have a bad game. The Rams and 49ers always play each other tough, and I see no reason that changes tonight.

Jeff Wilson is in an awesome spot for his Dynasty Owners. I always feel comfortable going with the over when Kyle Shanahan has a clear-cut lead running back. Potential Value of the Game tonight.

Deebo should be an easy over in tonight’s game. The last five games Deebo has played against the Rams, he has averaged 23.94 Dynasty Owner fantasy points per game.

Had this been last week, Aiyuk would have just gone over the 12.5 projected total. Unfortunately, it is not last week anymore. Aiyuk fails to hit the over but should score around 8-10 Dynasty Owner fantasy points.

Oh, how the mighty have fallen. The NFL is one of the toughest sports to predict due to injuries and Kittle is a prime example of that. I expect Kittle to bounce back and hit the over this week, but not by much. He’s got his boy (Jimmy G) back!

Dynasty Owner Games of the Week

Every week, I will pick at least one Dynasty Owner game that is close in score and will be decided during Monday Night Football. If you happen to find yourself in this situation on Sunday night, please get ahold of me on Twitter (@jaypoundsnfl) and I will gladly feature your game here.

I didn’t put this matchup in because it will be a crazy finish or anything, I put it in because Arizona Phoenix (@dnewell2003) reached out on Twitter, and I would like to encourage more of you to do the same!

The Arizona Phoenix should have this game in the bag, but I have seen crazier things happen in Dynasty Owner. Aiyuk could finish with a stat line of 3 catches, 4 yards, and 2 fumbles causing mayhem in the Fantasy Legends League. As for Huckleberries, I will try to find a more favorable matchup for you in the article next week.

It looks like we are featuring the Fantasy Legends League in this week’s article. In our second matchup from the league, we have what should be a barn burner with Draft Dodgers currently projected to win and stay undefeated. Unfortunately for Draft Dodgers, I have Deebo Samuel pegged for a huge night, and he tends to explode when playing against the Rams. If Deebo does not have a good game, this matchup could get ugly fast for Backstage Bums. Either way both Dynasty Owners should be nervous, and I must say if Backstage Bums are able to pull this off with Tua Tagovailoa ($7,568,859) as their Starting quarterback, it will be an impressive victory.

Good luck to all four Dynasty Owners featured in this week’s article.

I don’t think I have ever had a closer finish for Value of the Game than I did last week. Going into the game, I had the pick narrowed down to four players, with only two of them getting real consideration. Those players were Cooper Rush ($977,500) and Tony Pollard (796,945). While it was a tough decision, I ended up getting it right with Rush at $59,242 Dynasty Dollars per Fantasy Point (DD/PT) being a better value than Pollard at $63,756 DD/PT.

I must say this has become my favorite segment of the season for The Jerk and me. Most weeks, this honor is a complete crapshoot as Colby Parkinson ($991,360) won it the first week on Monday Night Football. Now, it has been something I have become invested in when MNF is meaningless for my fantasy teams. I challenge all of you to pick a Value of the Game with, or against me and have some fun with it.

For Week 4, I had an extremely tough time picking between Jeff Wilson and Deebo Samuel. I ultimately ended up going with Samuel as I am expecting his first huge performance of the year. In the last five games Deebo has played against the Rams (playoffs not included), he has averaged 23.94 Dynasty Owner fantasy points per game and that number grows to 25.95 Dynasty Owner fantasy points per game if you only look at the last four matchups.

Be sure to check out all our upcoming content this season. We will have several articles, podcasts, and the Livestream on Wednesday at 4 PM (Eastern) for everyone each week. Thank you all for reading and I hope your teams killed it this week. Stay safe out there and good luck on your 2022 Chase for the Ring! 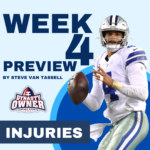 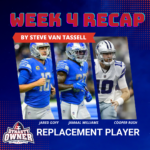