Dynasty Owners! The Dynasty Owner Playoffs are just 3 weeks away! While we are getting down to the nitty gritty as far as quality free agents are concerned. There may be a few players left who can help your team get better, especially your Bench and Practice Squad depth.

As we always do before jumping into the free agents of the week, let’s talk about a few of my biggest surprises of Week 11. The Colts continue to play well under former player and new coach Jeff Saturday. In Week 11, the Colts gave the Eagles everything they could handle before losing in the closing minutes of the game. My huge takeaway from the Saturday hire is that the players we all love and need to produce in Indianapolis have looked much better the past two weeks.

If we jump all the way back to the Thursday game, we will find that two rookies had a coming out party of sorts. Those rookies are none other than Treylon Burks ($3,592,398) and Christian Watson ($2,310,258). Can they keep it up? Both are talented and should receive a ton of opportunity to do so.

The Rams nightmare of a season continued in Week 11 as star quarterback, Matthew Stafford ($27,000,000) went down with his second concussion in as many weeks. I am fully expecting Stafford to miss this week’s game, if not longer so plan accordingly if you have any of the healthy Rams on your roster.

Finally, we have my Steelers who once again lost, but a silver lining can be found for our Dynasty Owners. George Pickens ($1,688,045) and Najee Harris ($3,261,862) both had good games and should produce as capable starters moving forward. Enough of the past, let’s move on to Week 12.

The players listed below are in no order and are less than 85% rostered in Dynasty Owner with a salary of $9,000,000 or less.

Steve Van Tassell had to have loved every minute of the Panthers-Ravens game this past weekend with veteran receiver Demarcus Robinson playing out of his mind! Steve liked Robinson heading into this season and he was apparently on to something. In Week 11, Robinson had a massive game finishing the day with 9 catches for 128 yards, scoring 21.8 Dynasty Owner fantasy points and was left on just about every Dynasty Owner’s Bench. It is highly unlikely that Robinson will put up these types of numbers again this season, but he should have secured a nice role to become much more consistent with this performance. Second year wideout Rashod Bateman ($3,149,853) is out for the season and the Ravens have needed someone to step up over the last several weeks. If Robinson can build off of this performance, he should find himself second in line for targets in Baltimore behind stud tight end Mark Andrews ($14,000,000).

As I mentioned earlier in the article, quarterback Matthew Stafford has suffered two concussions the last two times he has stepped on the field. I know players suffer concussions and play the following week quite often, but when multiple concussions are involved the process becomes much more rigorous for the player to get back on the field. The other factor working in John Wolford’s favor is the fact that the Rams are struggling horribly this season and the playoffs are out of reach. I could see a real possibility where the Rams opt to sit Stafford for the remainder of the season and see what they have on their roster at the quarterback position. If Wolford were to get the nod, I would not expect big numbers from him as he struggled against the Cardinals in Week 10 and has very limited experience in the NFL. I know that last statement does not provide you with much confidence, but at this point in the year it is near impossible to find depth at the quarterback position if you do not have a huge amount of salary cap space and points are points.

Up next, we have a player who has earned himself a nice payday come 2023, Greg Dortch. Greg Dortch went undrafted in 2019 out of Wake Forest and has been an afterthought for Dynasty Owners ever since. Throughout the 2022 season, Dortch has made a name for himself and has once again given Dynasty Owners a reason to roster him. In Week 11, Rondale Moore ($1,731,060) went down with an injury and Dortch turned into a mini-Demarcus Robinson finishing the day with 9 catches for 103 yards plus 15 return yards to score 19.7 Dynasty Owner fantasy points. Dortch will likely go back to being the odd man out when Moore returns but it may be a few weeks before we see the oft-injured youngster again. At worst, Dortch is a cheap flier who has shown capable of producing double-digit Dynasty Owner fantasy points.

Up next may be an odd selection for some, but I feel the upside of Justin Jackson was better than any player I left off of this list. At the moment Jackson seems to be buried on the Lions depth chart but despite that, he has seen work in each of the past three games and has not looked bad when playing. In Week 11, Jackson turned just 9 carries into 66 yards and added a catch for 11 yards. He also had 62 return yards, good enough to score double-digit Dynasty Owner fantasy points (10.3). The Lions running backs have produced this season and if veteran Jamaal Williams ($3,000,000) were to go down to an injury, Jackson would likely see a much bigger workload. I know the Lions still have fantasy football’s favorite running back D’Andre Swift ($2,134,728) available, but he has not seen much work since he was hurt earlier in the season. Is Justin Jackson a risky pickup? Absolutely, but he has the potential to become an excellent Bench option at some point.

I can’t lie, Randall Cobb was a tough one to put on this list. I did so because I am trying to find any production left to help all of you win a Championship this season. Cobb is going to be a pricey pickup but if he is able to stay healthy, he could put up good numbers the rest of the way as he seems to be fully trusted by quarterback Aaron Rodgers ($33,500,000). As I stated earlier rookie Christian Watson has looked excellent the past two weeks catching 5 touchdowns, but there is still a ton of open production in Green Bay. Against the Titans on Thursday, Cobb was able to haul in 6 catches for 73 yards and add 5 return yards. He scored 13.4 Dynasty Owner fantasy points. While Cobb did not score a touchdown in Week 11, I do expect him to be heavily involved in the red zone for the rest of the season.

Thank you all for reading and good luck with your Week 12 matchups! Don’t forget to check out the other articles from Steve, Matt, and Nate, as well as the Livestream, Champions podcast, and the podcast with Steve and myself. Stay safe out there and good luck on your 2022 Chase for the Ring! 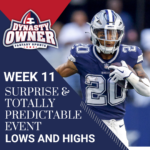 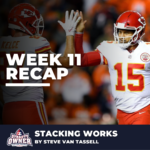