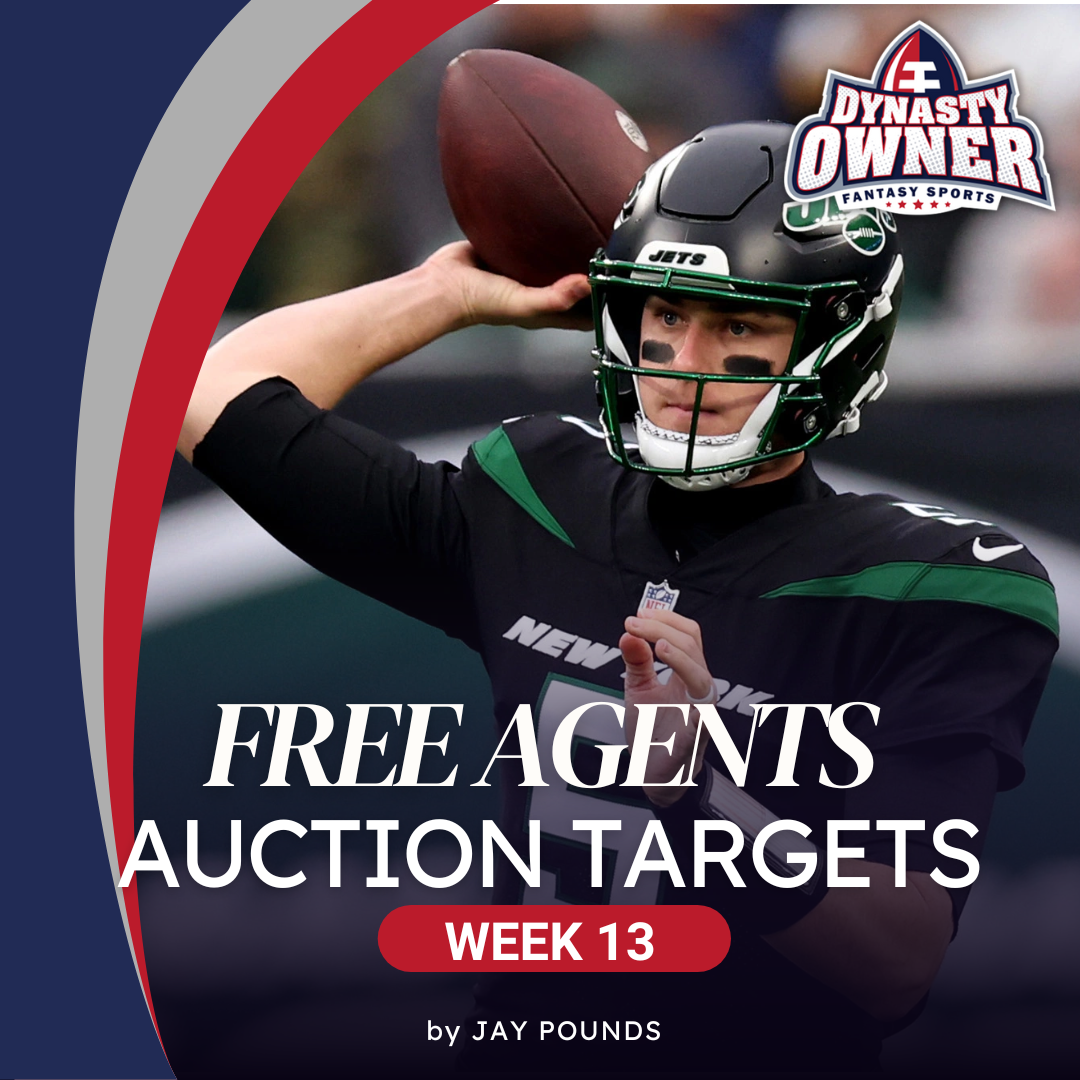 Dynasty Owners, it is dumpster diving time again! Surprisingly this week there are actually a few players who should be able to contribute immediately for your teams. The running back position is starting to dwindle down and if you have been hit with the injury bug, I may have a few names for you. Just look below.

As always before jumping into the free agents for the week lets hit a quick recap of Week 12’s biggest surprises.

I will start with the G.O.A.T., Tom Brady ($15,000,000) who I thought was starting to find his stride that would only be helped by a terrible Cleveland defense. That was not the case and Brady and the Buccaneers left Cleveland without a victory. They still sit atop of the weak NFC South and will almost certainly be in the playoffs when all is said and done. Can they turn things around or is it too late? Only time will tell.

The Seahawks have been a hot topic all season long, but it seems as if reality is starting to smack them in the face after a tough loss against the lowly Raiders. Josh Jacobs ($2,983,350) had an insane day against what was a tough Seahawks defense thus far and may have exposed them long term. It will be interesting to see where Seattle goes from here, but I will surely be watching to find out.

The last game I want to touch on is the Ravens vs. Jaguars. The Jaguars mounted an incredible comeback against the Ravens whose defense is no longer a strong suit of the team. The Ravens are now tied with the Bengals at the top of the AFC North, but if they go on to lose the division this loss will stand out big time.

The players listed below are in no order and are less than 85% rostered in Dynasty Owner with a salary of $8,000,000 or less.

The first candidate on today’s list is someone whom most all of us should be familiar with. In 2021, Mike White filled in for Zach Wilson ($8,787,670) and went completely berserk in his first start throwing for over 400 yards passing. After White’s first start in 2021, he struggled and was eventually replaced by Wilson when Wilson returned from injury. Fast forward to 2022 and White is once again the starting quarterback for the New York Jets and the job appears to now be his to lose versus being a placeholder last season. In Week 12, White had a great game and got the Jets offense going for the first time in a couple of weeks finishing with 315 yards passing and 3 touchdowns plus 2 rushing yards, good enough for 34.9 Dynasty Owner fantasy points. White not only had a big day himself but helped the Jets talented young receivers, Garrett Wilson ($5,183,502) and Elijah Moore ($2,235,107), have big days as well and making their Dynasty Owners happy.

One of these weeks, the season is either going to end or you guys are going to get sick and tired of seeing Zay Jones on this list and will pick him up to shut me up. Before I start in on my 75th Zay Jones segment of the season I must say I am no Jones truther and hated this signing before the season. With that said, Trevor Lawrence ($9,198,372) has taken a big step forward and it has paid off huge for the receivers in Duval. I have said a few times this season that Jones would need to find the end zone to have a big day and in Week 12 he proved me completely wrong. Jones finished his day against the Baltimore Ravens with 11 catches for 145 yards, scoring 27.5 Dynasty Owner fantasy points. As crazy as it sounds when the Jacksonville offense is on Lawrence can support two receivers, but that is a gamble as we have seen several times this season.

Up next, we have Zay Jones teammate JaMycal Hasty. Hasty is a name we all know from his days with the 49ers, but he has been virtually non-existent since he was stuck behind James Robinson ($763,333) and Travis Etienne ($3,224,526). As we seen in San Francisco, Hasty has a ton of talent and has a skillset to be a bell cow back with the main questions being his durability and efficiency. In Week 12. Etienne went down with an injury and is likely to either miss or be limited in his upcoming game paving the way for Hasty to see a huge workload. After the Etienne injury, Hasty filled in, in a big way finishing the day with 28 rushing yards, 67 receiving yards, and 1 touchdown scoring 20.5 Dynasty Owner fantasy points. With a full week of practice under his belt and a game against the Detroit Lions, Hasty is in a great position to succeed in Week 13.

Any of you awesome folks out there who read all the Dynasty Owner articles may remember this name! I had Zonavon Knight listed in an article I did just over a year ago previewing the 2022 draft class. Knight had a ton of talent coming out of N.C. State, but ended up going undrafted and is now out to prove his doubters wrong. In Week 12, Knight filled in for James Robinson who happened to be a healthy scratch for the Jets. This should mean a big workload for Knight until Michael Carter ($1,071,842) is fully healthy.

In Week 12, Knight stepped up in the Jets victory over Chicago, finishing the day with 14 carries for 69 rushing yards and 3 catches for 34 yards in an impressive debut for the undrafted rookie. If Knight can build upon the success he found in his debut, he just may stick in the NFL long-term. Knight is also cheap and on a one-year deal making him a player with almost no risk if you pick him up.

The last player on this list was placed here out of pure speculation that Matthew Stafford ($27,000,000) will likely miss the remainder of the season. I know there are several contradictory reports out there, but Stafford has suffered two concussions in as many games and the Rams have zero shot at the playoffs. Would the Rams really put Stafford out there to possibly suffer a third concussion during a lost season? I am not buying it and think we have seen the last of the Super Bowl winning quarterback until 2023 kicks off.

In Week 12, Perkins did not do anything special, but it is his rushing upside that makes me think he is worth a look. Perkins finished his debut with just 100 passing yards, but he was able to find Van Jefferson ($1,402,784) for a touchdown and added 44 yards on the ground. If the Rams do go with Perkins the rest of the way, I would expect them to utilize his rushing ability much more than we saw in his starting lineup debut.

We also have a bonus target from Monday Night Football.

I honestly am not too sure how to feel on Benny Snell moving forward but I put him on here because he is a Steeler who has a low roster share and looked good in relief last night. While Snell looked good against the Colts, I am nowhere near sold on his usage moving forward. Rookie Jaylen Warren ($857,333) was held out of the Monday night showdown, but I expect him to be ready to go come Week 13. I also am not sure if Najee Harris ($3,261,862) will miss any time as he went down to an abdominal injury, but returned to the field a couple of times before being ruled out for the rest of the game. If both of Snell’s fellow backfield mates miss Sunday’s game, he is well worth a look but if either of these guys are able to go on Sunday I would advise staying away, especially on a bad Pittsburgh offense.

Thank you all for reading and good luck with your Week 13 matchups! Don’t forget to check out the other articles from Steve, Matt, and Nate, as well as the Livestream, Champions podcast, and the podcast with Steve and myself. Stay safe out there and good luck on your 2022 Chase for the Ring!