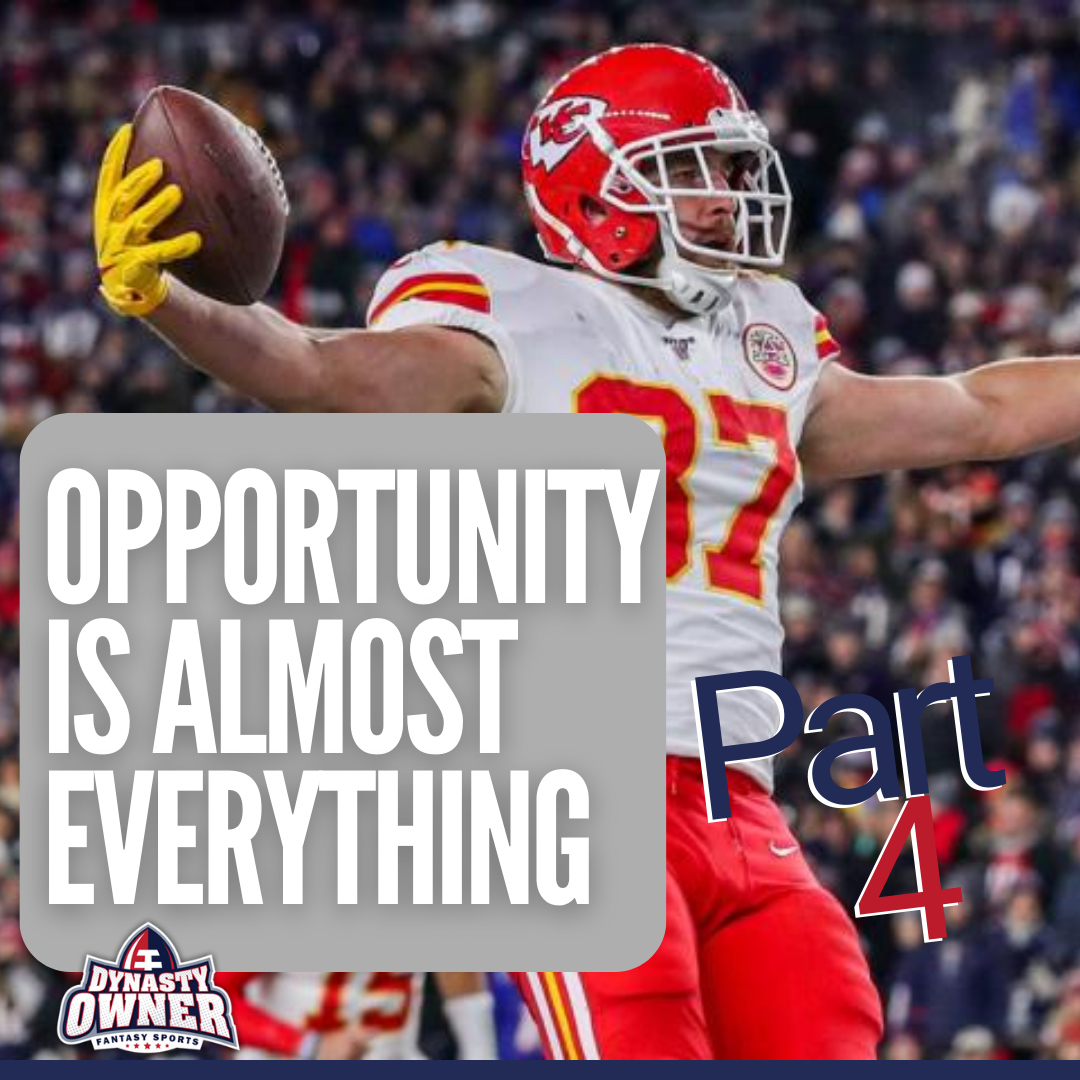 Hello all. I’m Matt TheJerk here with Dynasty Owner. I will be finishing up my Opportunity Is (Almost) Everything article series. Over the past three weeks, I have discussed quarterback, running back and wide receiver opportunities. I have also compared those opportunities to snaps and Dynasty Owner fantasy points. Today, I will be wrapping up with the tight ends.

“A few years ago, I came across a few underutilized metrics that, I think, can help bridge the gap between opportunity and fantasy production. So often we compare Player x to Player y without having the full context of their seasons. I am guilty of comparing players that I know haven’t had the same opportunity. These metrics are also a great way to see which players are on the field, but aren’t receiving the opportunity you would expect.

So often we talk about how much a player’s opportunity means to fantasy production (especially for running backs). Well over the next month, I’m going to show you that while it is very important, opportunity isn’t quite everything.”

Today we will be talking about tight ends. This article will be limited to players in the Top 20 at each position. I’m going to be presenting some of the leaders in each of these categories…

An opportunity for a tight end is the same as it is for a wide receiver. It would be the addition of all targets and rushing attempts. The one caveat to this is of course Taysom Hill ($10,000,000). Hill’s passing attempts must be included as he sometimes comes in as a quarterback and attempts a pass.

We see that Travis Kelce leads this list. No surprise here. Kelce is far and away the most productive tight end in the NFL this year as he has been for the past five years. A great deal of this success comes from great opportunity. Kelce has nearly 30 percent more opportunities than the next closest tight end. If you gave players like Mark Andrews or T.J. Hockenson the volume Kelce has (with their same production), they would both be at exactly 184.6 Dynasty Owner fantasy points. Clearly this is still not as dominant as Kelce, but it would close the gap a bit.

As I say in every “Opportunity” article though…

“Opportunity is not quite everything.”

Opportunities per Snap (Opp/Snap) looks at how efficient a player is with their opportunities when they take a snap.

Taysom Hill should be expected to lead this list. He is a very unique player who is used in a way that no other team uses another TE. He has designed packages where he comes in and does some combination of rushing, passing or receiving. The majority of his Dynasty Owner fantasy point production comes from the rushing ability, but he has been known to throw touchdowns as well. Hill is looking at 80 opportunities on only 201 snaps, but how are those 80 opportunities made up? Here is the breakdown.

There’s not much analysis that I can give you from this other than what you already know. Hill is a boom/bust type player who can be exciting to watch. However, you never know how much he will get the ball or in what situations. He should be rostered in most Dynasty Owner leagues (and is rostered in 62.98%), but the decision on whether to start him or not will depend on your other tight end options. I would be hesitant to start him as nearly two-fifths (39%) percent of his fantasy points this year have come in a single game (Week 5 against Seattle when he scored 39.0 Dynasty Owner fantasy points).

To put his season into perspective, Kelce would be the QB10, RB3 or WR3 based on how many Dynasty Owner fantasy points he has. He is doing all of this as a tight end. It goes without saying, but Kelce will be the number one league winner this season in both redraft and Dynasty Owner. The advantage you get with him over every other team is bigger than I’ve ever remembered. His salary will always be too high to be a Value of the Year winner, but he will for sure be a league winner.

Thank you for reading. Next week I’ll start a new article series as we look forward to the Dynasty Owner playoffs. Message me on Twitter (@dynastyjerk) and let me know if you have any questions or concerns. I would appreciate it if you followed @Dynasty_Owner on Twitter as well as subscribed to Dynasty Owner on YouTube.  Take care everyone and be safe.