Here it is. Thanksgiving Football. Possibly the best regular season day of football. I have three games to get through, so they will all be a little more abbreviated than usual. I’m going to jump right into it.

Last week I picked Nick Westbrook-Ikhine ($895,000) to be my Value Of The Game with the following stat line.

I missed yet another pick on this one. Westbrook-Ikhine only mustered two receptions for 28 yards. Instead, the award this week went to the rookie breakout wide receiver Christian Watson ($2,310,258). Watson had four receptions for 48 yards plus 3 rushing yards and two touchdowns (21.1 Dynasty Owner fantasy points)

His stat line combined with a salary of $2,310,258 makes Christian Watson the Week 11 Value of the Game with the lowest Dynasty Dollars per Fantasy Point (DD/PT) total.

Bills @ Lions – What To Watch For

I’m watching for an offensive explosion in this game. I’ll get to it in a bit, but there are handfuls of Starting lineup and Bench Dynasty Owner players in this game. The Over/Under is a savory 54 points. Yes, Buffalo is a 9.5 point favorite, but I expect this game to be kept closer than that. I want just about every rosterable player in this game.

Josh Allen is the QB2 on the season playing against the worst statistical defense against quarterbacks. There’s a good chance Allen is the QB1 for Week 12.

All three of these running backs should be started. I have the most concerns about Swift due to his lack of volume, but he is still an electric player who doesn’t need more than 10 touches to be in your Starting lineup.

He’s the WR1 on the season.

Both are startable even though they play two completely different roles for their team. Davis is a big play, sometimes touchdown dependent wide receiver. St. Brown is a possession receiver who is far and away Jared Goff’s ($33,500,000) favorite target.

Knox is always a risky start, but with his last game (14.0 Dynasty Owner fantasy points) and the overall wasteland at tight end, I have no problem playing him.

Here at Dynasty Owner, you not only get points from your Starting lineup, but also from your Bench. Your Dynasty Owner teams get 25 percent of the points scored from players on your Bench added to the total final score. This means that Bench scoring could (and often does) affect the outcome of individual matches as well as championships. Here are the players I would be okay putting on my Bench.

I had many options for Value of the Game (VOTG) here. I considered Gabe Davis, Amon-Ra St. Brown and even Dawson Knox. In the end, I think the Bills will be able to run all over the Lions and Singletary will be the beneficiary.

Giants @ Cowboys – What To Watch For

Here we have an interdivisional game that could have playoff and division winner implications. I want to see how the Cowboys respond after a massive victory and how the Giants respond after a tough loss.

Dak has put up an average of 25.1 Dynasty Owner fantasy points per game since his return from injury. He is a great start no matter what the matchup.

Saquon is always in your Dynasty Owner Starting lineup even against a solid Dallas defense. Pollard is electric, and I will speak more about him in a few minutes. I have worries about Zeke, but he continues to be involved in the running game especially on the goal line.

Both Lamb and Schultz are fine starts this week. I would have reservations about playing both of them in the same league, but they should each get north of 10.0 Dynasty Owner fantasy points.

I’m really not excited about either of these Bench options, especially since they are facing the Cowboys, but there is a little meat on the bone for both.

While I could still be wrong here, this seems like an obvious choice. Pollard is making less than $800,000 per year and he is RB9 on the season. Truly amazing value, and that value should continue into Thursday afternoon.

Patriots @ Vikings – What To Watch For

Minnesota is a 2.5 point home favorite in this game. I expect a rather low scoring affair with quite a bit of ground game. I want to see if both teams’ top running backs can each get over 15.0 Dynasty Owner fantasy points.

Stevenson has been making a killing through the passing game with at least six receptions in three of his last four games.  He is currently RB10 on the season.

Cook is still a must start every week.

I don’t really see a scenario where Jones should be started in any Dynasty Owner league, but he is a fine Bench player who can get you around 15.0 Dynasty Owner fantasy points.

Stevenson is my Value of the Game (VOTG) pick for the third Thanksgiving Day game. Once again, I see him doing most of his damage through the air and getting a receiving touchdown. A 20.7 Dynasty Owner fantasy point performance combined with a salary that is barely over $1 million makes Rhamondre the VOTG.

Wow, that was a long one. I hope everyone enjoys their Thanksgiving and these games. Take care and be safe. 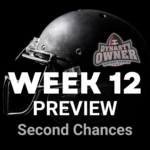 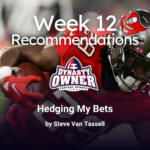