The average points per team in the eight early Sunday games was 18.5 points as the 16 teams combined for a total of 296 points. Two games had fewer than 20 points scored combined with only 13 points scored in the Patriots-Jets game and 16 points in the Ravens-Panthers games. If you were relying on players in those games, your Dynasty Owner team may have been in trouble.

In contrast, the eight teams in the late Sunday games plus the Sunday Night Football game scored a total of 205 points, or 25.6 points per game. That’s a full TD and PAT more than the average team scored in the early Sunday games. The lowest scoring late game was the Raiders-Broncos game that finished with 38 points. Four early games had fewer points. Six teams scored 30 or more points on Sunday (Cowboys, Bengals, Bills, Lions, Chiefs and Steelers) and four of them played late Sunday or on Sunday night.

Just because the early games were lower scoring than the late games doesn’t necessarily mean that the players in those games scored more Dynasty Owner fantasy points. That’s true and it would be difficult to fully find and analyze those data. However, what I can do is look at the highest scoring players and see when they played. We’ve had ten players score 30.0 or more Dynasty Owner fantasy points so far this week and only three of them played in the early Sunday games. In fact, the top five scoring players in Dynasty Owner this week played in late Sunday games. I don’t want to spoil who they are for the recap article tomorrow as several of them will likely appear there as Dynasty Owner Player of the Week, Value Player of the Week and players who should have been in your Starting lineup.

The Surprise of the week involves one of the later Sunday games, but that doesn’t necessarily mean it was a good, high-scoring surprise. The Totally Predictable Event was from one of the low-scoring early games and was something that I have actual proof about believing while others may not have agreed with me.

For the purposes of this article, all statistics, ADP and Dynasty Owner rostered percentages were current as of the afternoon of November 21st.

Surprise of the Week – Vikings Get Blown Out

This section is where I highlight one fantasy football surprise of the week. It’ll be something that nobody really saw coming. It could be a good or bad surprise depending on the week.

Maybe some people saw this coming, but I did not have the Minnesota Vikings getting blown out by the Dallas Cowboys on my radar. I thought that the Vegas line of Dallas -2.0 points with the game being played in Minnesota was completely disrespectful to the Vikings after their crazy victory over Buffalo last week. I thought that the Vikings would come out and play well to try and show everyone that they were a better team. They needed to show that the Buffalo win wasn’t a fluke, even though the Vikings had nearly given the game away after being stopped on the goal line with under a minute to play, only to win in overtime.

Turns out, I was completely wrong and surprised at how dominant Dallas was in the game. I only saw part of the game, so maybe if I watch it in full, things will look better for the Vikings. However, the statistics show me that the Vikings were completely dominated by the Cowboys. The Cowboys didn’t do it with turnovers and miscues by the Vikings’ offense. Instead, it was just good solid offense and defense by the Cowboys (or maybe just less than solid defense by the Bills who also gave up 23 points to the Browns in Week 11).

If we just focus on the Vikings, a check of the stats from the past two weeks show quite the contrast between Week 10 and Week 11.

The Vikings held their own last week with the Bills’ high powered offense, but were completely outmatched this week. I’m sure part of it has to do with the Dallas defense, but it’s also very possible that those of us who thought the Week 10 Vikings were the real Vikings may have been wrong.

Maybe the Vikings just aren’t good against NFC East teams. After all, they are 1-2 against the NFC East and 7-0 against the rest of the league. They lost to the Eagles back in Week 2 and had to pull out a last minute victory in Week 9 over the Commanders. We’ll see if this theory holds in Week 16 when they play the Giants the day before Christmas.

This section is where I highlight one totally predictable thing that might be surprising to other people, but might be something that I’ve been believing and saying for a while, but many people haven’t been listening or agreeing with me on it.

This week, I’m doubling down on a prediction that I made during the Dynasty Owner podcast with myself and Jay Pounds, when I made Zach Wilson ($8,787,670) my Bust of the Week. Even after seeing Wilson have his best game of the season three weeks ago against the Patriots when he had 21.9 Dynasty Owner fantasy points (355 passing yards, 2 rushing yards, 2 TDs, 3 INTs), I was pretty confident that Bill Belichick would figure out how to stop Wilson and the Jets’ offense with two weeks to prepare (the Patriots had a Week 10 bye). The Jets also had a Week 10 bye, but I knew that wouldn’t matter as much. In Week 11, the Patriots defense held the Jets to only 103 yards of offense, including a reported 2.7 inches of offense per play during the second half. This tweet also helpfully pointed out what 2.7 inches looks like:

I checked and can spread my fingers wider. All of that isn’t Wilson’s fault, but he is the QB and touches the ball every play. He also should have the power to change the play if he thinks it’s going to go nowhere (or even 2.7 inches). However, if you look at the stats, the Jets defense had more sacks (6 to 4), tackles for losses (8 to 7) and QB hits (8 to 6). The Patriots did have the ball for 10 more snaps (59 to 49), but even then, the Jets had more sacks and QB hits per play than the Patriots. Based on these stats, a lot of the Jets’ offensive problems point to Wilson just not playing well as his 9 completions on 22 passing attempts for 77 yards passing would indicate.

The reason why I’m flagging this as something that others may not have agreed with me on is that Wilson had similar Dynasty Owner startup ADP (99.4) as Steelers rookie QB Kenny Pickett ($3,516,976), who had a startup ADP of 100.4. This is despite Wilson’s salary being two and a half times higher. In addition, Dynasty Owners who drafted Wilson had the benefit of seeing him play 13 games in 2021 without a lot of success (177.0 Dynasty Owner fantasy points, or 13.6 points per game). Right now, both of them are pretty even with Pickett slightly ahead of Wilson in terms of Dynasty Owner fantasy points (95.3 vs. 93.4) in the seven games that each one has played, so Dynasty Owner should have drafted Pickett and saved themselves $5.27 million in salary.

Yes, it is true that I’m a biased Patriots’ fan who dislikes the Jets. I’ll still have Jets on my Dynasty Owner if they are good and have a reasonable salary, but I’m not having Zach Wilson. I screwed up two years ago and took then-Jets QB Sam Darnold ($18,858,000) in the ninth round (pick #104) of a Dynasty Owner startup draft to be the backup to Patrick Mahomes ($45,000,000) and immediately regretted the decision. I gave up on Darnold nine games into the season after he missed three games due to injury and had only 70.9 Dynasty Owner fantasy points in the other six games (11.8 Dynasty Owner fantasy points per game). Do I see Wilson as Sam Darnold 2.0 for the Jets? Yes, I have thought that about him pretty much since he was drafted, and his recent play has only reinforced that belief.

A special extra and repeat Totally Predictable Event of Tony Pollard ($796,945) outplaying Ezekiel Elliott ($15,000,000). Back after Week 8, I had Pollard Better Than Elliott as my Totally Predictable Event. Possibly the only problem with that article was that Pollard was playing in place of Elliott and my comparison was how each player had done in games in which the other one was out due to an injury.

Finally, in Week 11, we had both players in the Dallas lineup and as predicted, Pollard totally outplayed Elliott.

Pollard averaged 9.0 yards per touch versus 2.9 yards per touch for Elliott. Elliott had 2.8 yards per rushing attempt (15 attempts for 42 yards), while Pollard had a yards per rushing attempt average of 5.3 (15 attempts for 80 yards). Pollard added 6 receptions for 109 yards, while Elliott only had 1 reception for 5 yards. If you had either one in Dynasty Owner, I hope he was in your Starting lineup, but Pollard was clearly better than Elliott. Based on production, it should be a matter of time before Pollard takes over as the RB1 in Dallas, but I’m not sure if I’m ready to predict that will happen anytime soon.

Thanks for reading. Thanksgiving is just a couple of days away and I’m thankful that some of my fellow Dynasty Owners took the time to do so. If there was a surprise or totally predictable event that you think I missed, let me know on Twitter (@SteveVT33).

Enjoy your Thanksgiving and some great Dynasty Owner content this week with a slightly revised schedule.

Listen to the Dynasty Owner podcast with me and Jay or watch it on the Dynasty Owner YouTube channel. We are planning to record it on Wednesday morning, so it’ll be released sometime afterwards. Don’t forget that we also have the Champions podcast featuring our three Dynasty Owner Chase for the Ring Champions. You can find both of them wherever you get your podcasts.

Watch the Dynasty Owner Livestream as it happens as well. We answer trade questions and talk about Dynasty Owner and fantasy football in general. You can also catch it afterwards if you can’t watch us live. Finally, don’t forget to follow Dynasty Owner on Twitter as well. Thanks, and have a great day! 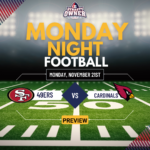 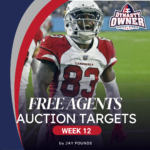