It’s time for Dynasty Owner second chances. This is the point of the Dynasty Owner season when you’ve played everybody in your league. There are still three Dynasty Owner regular season games left, so everyone gets to play three teams twice. These are randomly assigned at the beginning of the league year or after your league draft. You might get lucky and play a couple of struggling teams, or get unlucky and face some top contenders. No complaints. It’s the way it is and not changing this season, so you need to go out and win some games if your team needs wins to stay in playoff contention, or clinch a playoff berth.

A lot can change over the course of a season, or in 11 games. All Madden Team was at the top of the Chase for the Ring standings after the first week, and they are now in 21st place. Not bad, but not first place. Some of the teams in the first top 10 are still there, like Clara Strong 💪 in League #28280  Dynasty|Trade|School (D|T|S),  and The Road Warriors. Others are gone from the top 25 but still lurking, like Hingle McCringleberry (now in 30th place) and RAVENS1 (now in 34th place). Others appear to have dropped out of the top 100 like Dynasty Degenerate who does have a team now in 87th place) or Best in the World who started off in third place after one week. Unless they changed their team name. If so, apologies and let me know where you stand now.

All of the teams who lost their game back in Week 1 have a chance at revenge for that defeat. It’s a second chance to beat that team who made your season start off 0-1. Even if you’re out of playoff contention, it’s nice to avenge that defeat. You might even hurt your opponent’s playoff chances or chance for a first round bye. And if you’re trying to make the playoffs or get that first round bye, a victory will be that much sweeter if you topple the team that beat you in Week 1.

Not everybody is in that spot though. A few select teams won in Week 1 and haven’t stopped since. They are currently 11-0 and have defeated every team in their league once. For those teams who will be listed later, it’s a second chance to show your dominance over three of the teams in your league before the playoffs start. It could be important in terms of determining the final standings, playoff positioning, or even which teams you have to face to stay undefeated, win your league and maybe make a run at winning the Chase for the Ring.

If you aren’t one of the few undefeated teams, chances are good that you’ll get a second chance to beat a team who beat you earlier in the season over the next three weeks. If your teams are on the outside of the playoffs and trying to get in, like several of mine, then the second chance at a much-needed victory is even more important. Your team also may be trying to beat a team for the second time to stay in the hunt for the playoffs or even a first round bye. If that’s the case, as it is for one of the teams in our Match-up of the Week, then you’ll need to set your best lineup to prevent your opponent from taking advantage of their second chance of beating your team.

For the purposes of this article, all statistics, ADP and Dynasty Owner roster percentages were current as of the afternoon of Wednesday, November 23rd.

It’s time to finally look at the remaining undefeated Dynasty Owner teams after 11 weeks. All of these teams are currently in the top 100 of the Chase for the Ring standings. Apologies in advance if you have a Dynasty Owner team outside of the top 100 but still undefeated and not listed. If your undefeated team is missing, let me know on Twitter (@SteveVT33) or send a message to Dynasty Owner in some way. I’ll be sure to add you to next week’s update.

Thanks to The Oracle 🙌 himself for suggesting this match-up via Twitter (@joshuaj11029). Surprisingly, he didn’t suggest that I look at his match-up in League # 71014 in which his team is undefeated and ranked fourth in the Chase for the Ring. Instead, he suggested this league in which the match-up is expected to be close and his team has been “unlucky”.

After taking a look at his team, the standings and his schedule, I’d have to agree. His team has a 5-6 record, but they have scored the second most points in the league. They scored 1,547.3 points so far and rank 296th in the Chase for the Ring standings. The third highest scoring team in the league is 152.7 points behind. The points against column shows that no other team has gotten more points scored by their opponents than The Oracle 🙌 with the closest team having 70.5 fewer points scored against them. Knowing all of that, it’s not surprising that they have lost games by the following scores: 165.7 to 143.2; 145.8 to 134.9; 139.9 to 136.3; and 153.9 to 132.3.

One of the few times that The Oracle 🙌 wasn’t unlucky was Week 1 when they defeated Space Cowboys by a score of 177.5 to 164.3. It was the most points that The Oracle 🙌 has scored in this league, but not so for Space Cowboys who have topped 200.0 points twice, are 8-3 in the league and the top scoring team. They are in 74th place in the Chase for the Ring and an extremely good team that is likely looking forward to their second chance at a victory over The Oracle 🙌.

The match-up is expected to be very close with Space Cowboys favored by exactly 1.3 points. It’s tough to get much closer than that! With their playoff hopes possibly in the balance for The Oracle 🙌 and Space Cowboys trying to move up from third place and secure a first round playoff bye, both teams are obviously going to put together their best lineups.

Check back on Tuesday in the weekly recap article to see who won the Match-up of the Week and if Space Cowboys took advantage of their second chance against The Oracle 🙌 or not. There may be more second chances in Weeks 13 and 14 for Dynasty Owner teams to get revenge for an early season loss. We might have some first place or playoff matchups as well. If your team is one of these situations and you want to be next week’s Match-up of the Week, let me know on Twitter (@SteveVT33).

In the spirit of Thanksgiving, I do want to say “Thank you” to everyone who sent me a matchup suggestion this week after my tweet or during the course of the season. I was hoping to do more than one Match-up of the Week, but ran out of time with Thanksgiving on the horizon. The match-up sent by The Oracle 🙌 fit the theme best this week and better than the matchups that I had found on my own, so I went with it. Shout-outs to Chris (aka The Human Fund), Rudy (aka Dynasty|Trade|School (D|T|S), and Adam (aka the undefeated TPC Murder Hornets) for offering up your Match-up of the Week suggestions. All of them are great Dynasty Owners and deserve a follow on Twitter if you aren’t already doing so.

This was just your Dynasty Owner team’s first time at a second chance victory. After this week, you still have Week 13 and Week 14 remaining to get those revenge victories, or just a second win over one of the other team’s in your league. If you’re one of our 11 undefeated Dynasty Owner teams, you only need three more wins to cap an undefeated regular season.

Next week, it’s back to bye weeks. Eight more NFL teams, two in Week 13 and six more in Week 14, still haven’t rested for a week. I won’t list the teams as I’m still basking in the fact that it was nice to have a full roster of healthy players to choose from for my Dynasty Owner Starting lineups and Benches this week. Wasn’t it great? That won’t happen again until the first round of the playoffs (and Loser’s Bracket tournament) in Week 15.

What’s definitely going to happen next week is a return to our usual content schedule.

Please read all of our articles and tune into our other content as well. The Dynasty Owner podcast with myself and Jay took a hiatus this week, but we’re hoping to do two of them next week to make up for it.

The Dynasty Owner Livestream will be back on Wednesday at 12:30 PM (Eastern) next week as well. Dynasty Owner CEO Tim and I will answer trade and other questions and talk about Dynasty Owner and fantasy football in general. If you can’t watch it live, then catch it on the Dynasty Owner YouTube channel later on. Finally, don’t forget follow Dynasty Owner on Twitter as well.

Thanks for reading and have a Happy Thanksgiving! 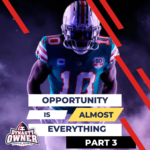 Opportunity Is (Almost) Everything: Part III 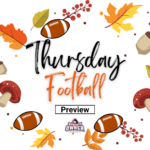