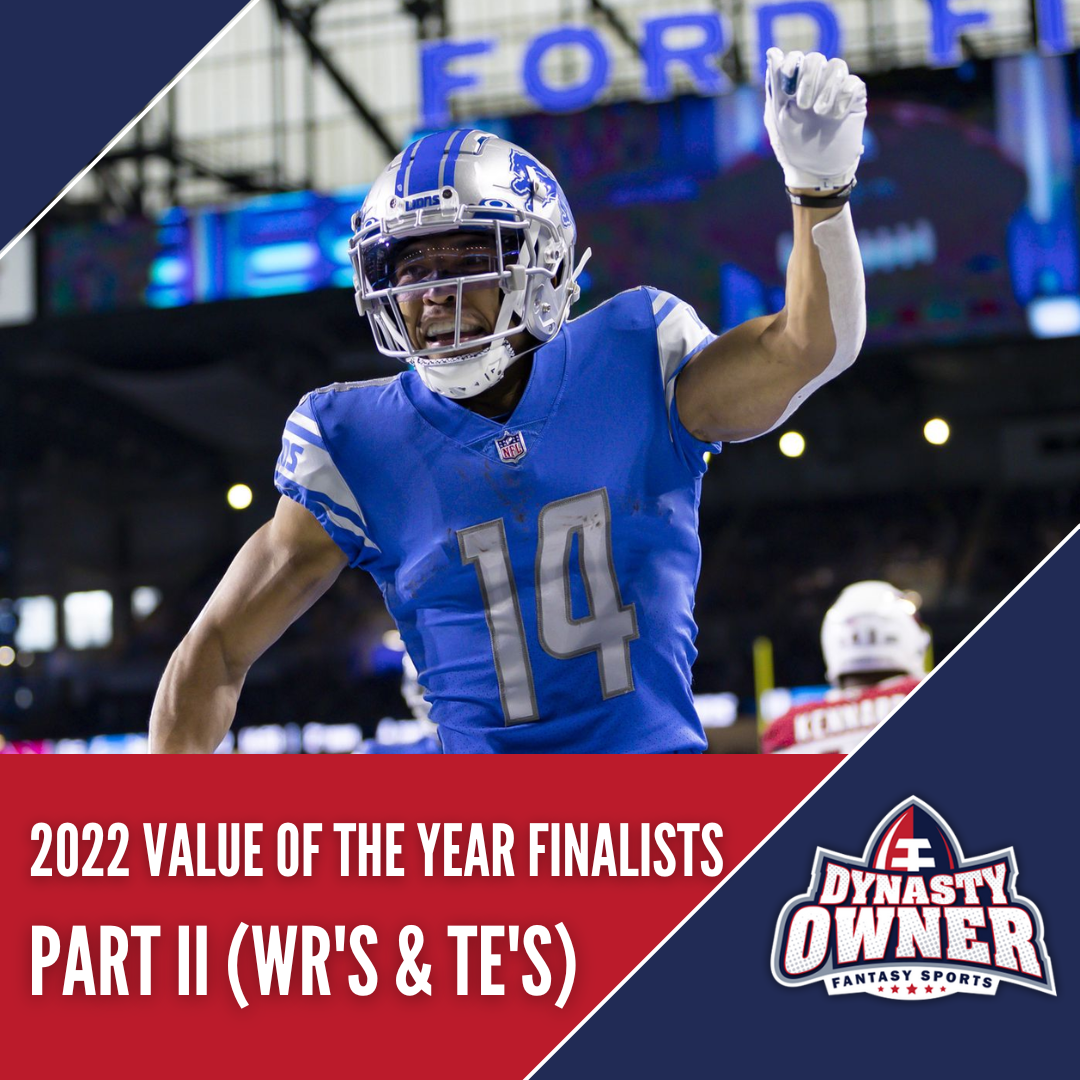 The Dynasty Owner season is almost over. Hopefully you were competitive this year, and hopefully you were able to bring home at least one Dynasty Owner Championship. Due to the Christmas and New Year’s Day holidays then the unfortunate situation with Damar Hamlin, Dynasty Owner is finally publishing my Value Of The Year Finalists (WRs and TEs). It has been a fantastic season, and it’s been one that was full of value. All statistics are through Week 16 so that the final week of statistics are not included.

Value Of The Year Finalists

St. Brown led all NFL wide receivers in Dynasty Dollars per Fantasy Point (DD/FP) after 16 weeks. Not only is he the best value in Dynasty Owner, but he is also WR7 on the season.

McLaurin has been a staple on this list for the past few seasons. He costs less than $1,000,000 and he scored north of 200.0 Dynasty Owner fantasy points for the third consecutive season.  This value streak will come to an end next season as his salary will increase significantly to $22.788 million per year.

Brown has been one of the most consistent wide receivers in the entire NFL this season. It’s fitting that he makes this list with his quarterback Jalen Hurts ($1,506,292). Both are extreme values, and they are both in the Top 10 scorers in their position. As is the case with McLaurin, Brown will no longer be considered a value in 2023 with a $25 million salary even though he should be 100 percent rostered.

Knox was the best TE value through 16 weeks. We’ll see what happens after the final scores through 17 games are in. Knox would have been my pre-season Value of the Year pick as his salary is very cheap, and he is on one of the best offenses in the NFL.

Johnson has been a boom/bust type tight end this season. Honestly, there aren’t many tight ends that haven’t been though. He had five games with double-digit Dynasty Owner fantasy points through Week 16, while also having five games with less than 5.0 Dynasty Owner fantasy points. Regardless, his cheap salary has made him a Value of the Year finalist at TE.

Moreau was a surprise addition to this list, but he only appears because of an injury. Darren Waller ($7,450,000) missed eight games. This gave a massive opportunity to Moreau. I wish I could say that Moreau made the best of his opportunity, but the reality is that he ended the season barely in the top 30 TEs. It’s amazing that he can make the top 3 for value at his position in this format, but that’s what happens when you have such a cheap salary.

Who will be the Value Of The Year?  While we have almost all of the statistics, you’ll have to wait until my next article for the answer.