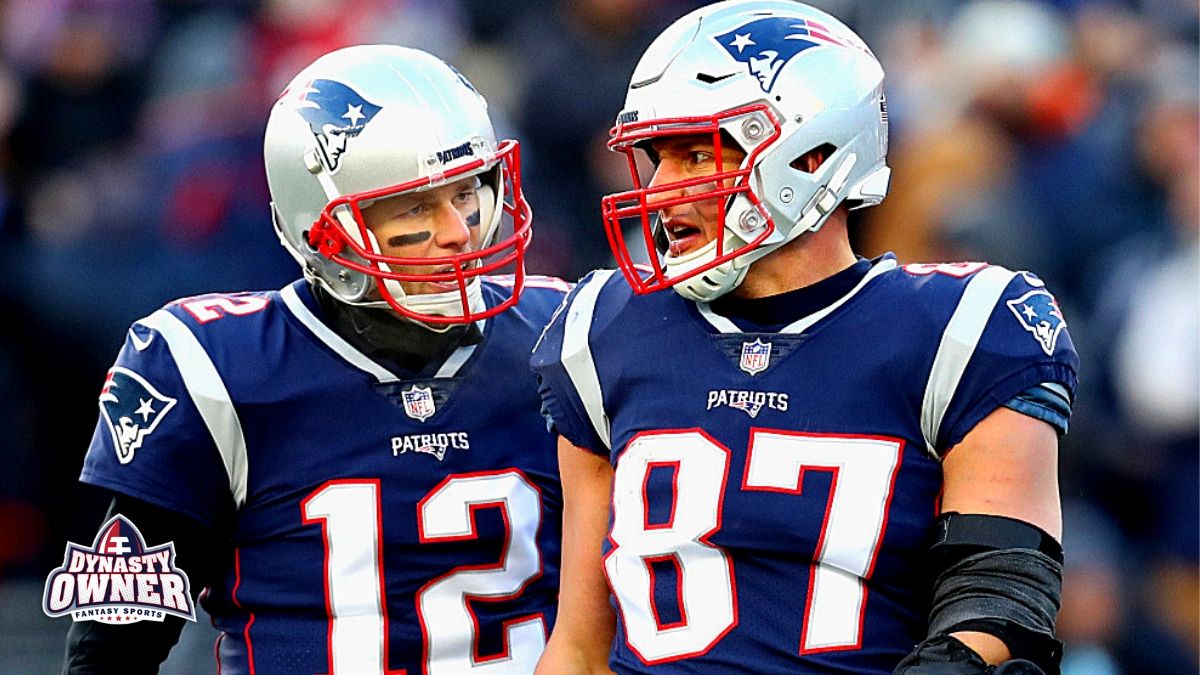 It’s time to analyze tight ends in our series of articles about the best players to build your team around when the beta season of Dynasty Owner starts in 2019. The regular fantasy football consensus number one TE pick for the past couple of years has been Rob Gronkowski of the New England Patriots. In case you’ve been without internet access for the past couple of months, you know he retired after the Patriots Super Bowl victory, so there’s an opening for top TE in 2019. Who’s going to fill the gap and become the new Gronk on the field as well as who’s the best value at TE for Dynasty Owners?

Tight ends score less than running backs and wide receivers using the Standard Dynasty Owner scoring system, but there’s some value out there at the TE position, but you have to look deep to find it.

All stats are based on the Standard Dynasty Owner scoring system as outlined in the Dynasty Owner Constitution. Standard Dynasty Owner scoring gives you .5 points for every 5 yards rushing or receiving, 1 point for every 20 yards passing, 1 point per reception, 6 points for a rushing, receiving or passing touchdown and 2 points for a successful 2-point conversion (rushing, receiving, or passing). Interceptions or fumbles lost cost you 3 points, while a fumble that is recovered by the player’s team is a loss of only 1 point. Bonus points are available for 100-199 yards rushing (2 points), 200 yards rushing or receiving (6 points), 300-399 yards passing (1 point), 400 yards passing (4 points). Kickoff and punt return touchdowns are worth 6 points for the player and kickoff and punt returns are worth .5 points for every 10 yards.

Head and Shoulders at the Top

If Dynasty Owner was a “regular” fantasy football league, then there would be an easy hierarchy or top tier of TEs since only three TEs had over 250 Dynasty Owner fantasy points in 2018. Those three TEs are Travis Kelce of the Kansas City Chiefs, Zach Ertz of the Philadelphia Eagles and George Kittle of the San Francisco 49ers.

Two of those players make a lot of money and are prohibitively expensive by Dynasty Owner standards, while one is head and shoulders the best value at the TE position.

Based on their 2018 statistics, there is some, but not a lot of separation between the three players on just a points basis:

However, this is Dynasty Owner and we need to put salaries into the mix. Adding salaries puts George Kittle head and shoulders above both Kelce and Ertz in terms of value as his annual rookie 2017 fifth round draft pick salary is only $674,572. This makes his cost per point a miniscule amount.

In terms of Dynasty Owner value, only two players at any position were more valuable in 2018 than George Kittle: Dak Prescott at $1,958 and Tyreek Hill at $1,971. Alvin Kamara was the top value running back at $2,723 per point. And this was with Nick Mullens throwing Kittle the ball for half of the 2018 season and C.J. Beathard starting five additional games. Could Kittle have an even better year with Jimmy Garoppolo behind center for the 49ers in 2019?

Because they have been getting the job done for the past several years, Travis Kelce and Zach Ertz are two of the highest paid TEs in the NFL. Kelce will cost Dynasty Owners nearly $9.4 million annually for the next three seasons – the second highest TE salary behind the $10 million annual salary for Jimmy Graham of the Green Bay Packers. Ertz will cost $8.5 million for each of the next three seasons, which is good for a tie for fifth place with Delanie Walker in the TE annual salary rankings.

However, when we combine points and salary, it’s Ertz who is better Dynasty Owner value than Kelce, although both are more than ten times more expensive on a per point basis than Kittle.

With their high salaries and high cost per point in 2018, does it make sense to take Ertz and Kelce ahead of some other TEs who might score a few less points, but cost you a few million dollars less in salary? Let’s find out!

Kittle, Ertz and Kelce were the top TEs in 2018 with the next two players just a step below them in terms of fantasy production. However, only one of them was a slightly better Dynasty Owner value than both Ertz and Kelce and neither was close to as valuable as Kittle.

In his first season with the Indianapolis Colts after four seasons with the Detroit Lions, Eric Ebron was the fourth best TE in 2018 as he had career highs in catches (66), yards (750) and touchdowns (13). And at $29,680 per point, Ebron was indeed a slightly better value than both Ertz and Kelce.

However, is Ebron worth as much as either Ertz or Kelce? While he was indeed the fourth best TE, he did score 61 fewer Dynasty Owner points than Ertz and 77 points less than Kelce. That’s nearly 4-5 points per game of lost production for a very small bump in value that you’ll have to make up elsewhere.

The fifth best TE in terms of overall scoring in 2018 was Jared Cook of the New Orleans Saints. Cook is the oldest TE of the group at 32 years of age, three years older than Kelce and four years older than Ertz. Despite his age, Cook produced a career year in 2018 for the Oakland Raiders with 68 receptions, 896 yards receiving and 6 touchdowns.

Now after signing a 2-year, $15 million contract (for an annual Dynasty Owner salary of $7.5 million), Cook’s 2018 value makes him more expensive on a per point basis than any of the other top TEs.

We need to go deeper into the tight end player pool to find any kind of value at the position for the nine Dynasty Owners in the standard Dynasty Owner 10 team league who aren’t able to draft George Kittle. Even if you are willing to pay the big salary for Zach Ertz or Travis Kelce, you might not get them. What do the rest of your league’s Dynasty Owner who have to fill a starting lineup position at TE do if they don’t get Kittle, Ertz or Kelce and decide against taking Ebron or Cook?

The good news is that second most valuable TE on a cost per point basis was also the sixth highest scoring TE in 2018 – Austin Hooper of the Atlanta Falcons. Hooper had himself a nice season in 2018, scoring 161 Dynasty Owner fantasy points (71 receptions, 660 yards receiving, 4 touchdowns) for only just over an $800,000 annual salary.

The bad news is that Hooper scored almost 100 fewer Dynasty Owner fantasy points (94 to be exact) than Kittle, or almost six fewer points per game. And you’re paying nearly twice as much on a per point basis for Hooper than Kittle.

As bad as that may seem, Hooper was still only one of four TEs in 2018 to score more than 100 Dynasty Owner fantasy points and have a cost per point of under $10,000. In contrast, there were thirteen WRs and twenty RBs who did so in 2018.

You’re probably asking yourself – Who are these other two value TEs? A deep dive into the 2018 TE player rankings shows us that they are: Chris Herndon IV of the New York Jets and Mark Andrews of the Baltimore Ravens.

With Rob Gronkowski gone, George Kittle is clearly the top TE to own in Dynasty Owner based on his 2018 production and low annual salary. It’s not even close.

Kittle was one of only four tight ends to score at least 100 Dynasty Owner fantasy points and have a value of less than $10,000 per point in 2018. Out of the four, he was the only one who scored more than 200 points. In addition, he was nearly twice as valuable on a cost per point basis than the second best TE, who he outscored by nearly six fantasy points per game. And you could argue that he may be even more valuable in 2019 with Jimmy Garoppolo at QB throwing him the ball.

The only question is: How early does he get drafted in your inaugural Dynasty Owner draft? We’ll find out soon as mock drafting has already started, and real drafts are gearing up in August.