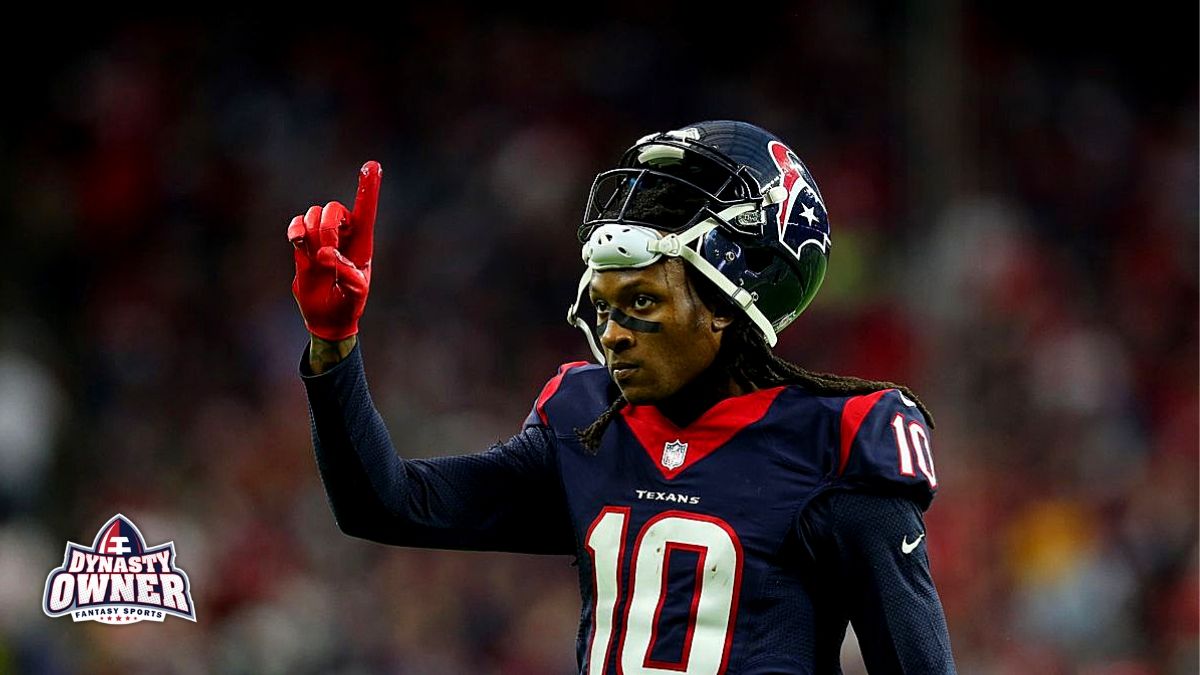 Wide receivers are the next position that we are going to examine in this series of articles about the best players to build your team around when the beta season of Dynasty Owner starts in 2019.

Does that mean you should be drafting your franchise WR after you grab a top RB or make sure you get a good value at WR first in order to avoid using your Dynasty Dollars on the more expensive WRs?

All stats are based on the Standard Dynasty Owner scoring system as outlined in the Dynasty Owner Constitution. Standard Dynasty Owner scoring gives you .5 points for every 5 yards rushing or receiving, 1 point for every 20 yards passing, 1 point per reception, 6 points for a rushing, receiving or passing touchdown and 2 points for a successful 2-point conversion (rushing, receiving, or passing). Interceptions or fumbles lost cost you 3 points, while a fumble that is recovered by the player’s team is a loss of only 1 point. Bonus points are available for 100-199 yards rushing (2 points), 200 yards rushing or receiving (6 points), 300-399 yards passing (1 point), 400 yards passing (4 points). Kickoff and punt return touchdowns are worth 6 points for the player and kickoff and punt returns are worth .5 points for every 10 yards.

It’s not just a saying, it’s a Dynasty Owner reality as we had nine WRs who are at the top of the WR rankings based on their 2018 stats. On points alone, they are all close as from number one to number nine, they all scored within 40 points of one another. In order, they are:

We are going to look at groups of three, as in trips formation. The first three are those WR who make less than the rest and represent the best value (Tyreek Hill, JuJu Smith-Schuster and Michael Thomas). Due to the ongoing investigation of Hill, we are going to set aside the top Dynasty Owner value WR from 2018 (328 points for an annual salary of $646,555, which equals $1,971 cost per point) and focus on Smith-Schuster and Thomas. By the time drafts roll around in August, we may have a better picture of what 2019 is going to look like for Tyreek, but for now, we’ll just look at the other two.

There was a post a while back on the Dynasty Owner Facebook page about which WR was a better value and we can settle that argument here by looking at their 2018 stats.

However, this is Dynasty Owner and we need to account for salaries in addition to just statistics. Fortunately for their teams, both of them have low salaries due to being second round draft picks (Smith-Schuster in 2017 and Thomas in 2016), Thomas’ salary is slightly higher since he was a mid-second rounder in 2016 (47th pick overall), while Smith-Schuster was a late second rounder in 2017 (62nd pick overall). Based on his higher NFL draft selection, Thomas actually makes more as their annual salaries for Dynasty Owner purposes are:

When we combine points and salary, it’s now Smith-Schuster who comes out slightly ahead on the all-important cost per point basis. Therefore, Smith-Schuster is actually a better Dynasty Owner value (and maybe worth a higher draft pick?).

The rest of the top nine look similar in terms of not only points as we saw earlier, but also salary as they all make in the $14 million to $16 million range and have costs per point in the mid-$40,000 to high-$50,000 range.

The order is slightly different for Dynasty Owners than in a regular fantasy football league as in Dynasty Owner. The top three in terms of points were DeAndre Hopkins, Julio Jones and Davante Adams, but they were separated by only ten points for an entire season. When we factor in salaries, both Jones and Adams were slightly more valuable in 2018 than Hopkins despite being outscored slightly.

That extra $1.7 million in salary for Hopkins makes him less valuable, despite scoring more points than the other two. So, who are you going to draft first – Jones, Adams or Hopkins?

The last set of trips – Antonio Brown, Adam Thielen and Mike Evans – are each in the $16 million salary range and just above $50,000 range in terms of cost per point, making them a tier below the rest of the top nine in terms of Dynasty Owner value.

As you can see, most of the best wide receivers are pricey and the top ones are going to cost you top dollar. However, there are values out there if you look beyond these nine guys and start hunting for value for the Dynasty Owner receiving corps.

Our number one Dynasty Owner value (besides Tyreek Hill) is Kenny Golladay of the Detroit Lions. While he doesn’t score as nearly many fantasy points as the top nine players, Golladay’s value on a cost per point basis is similar to that of both Michael Thomas and JuJu Smith-Schuster due to his low annual salary of just under $800,000.

Number two on this list is a surprise – Dede Westbrook of the Jacksonville Jaguars. Despite having Blake Bortles and Cody Kessler throwing him passes, Westbrook managed to score 187 Dynasty Owner fantasy points last year for on a fourth round 2017 draft pick salary of just $769,039. This makes his $4,113 cost per point value just slightly higher than Golladay and Michael Thomas and fifth overall among WRs in 2018.

Now that Westbrook has Super Bowl MVP Nick Foles throwing him passes, could he be in line for a breakout season in 2019 and worth a high Dynasty Owner draft pick?

Chris Godwin of the Tampa Bay Buccaneers is up next. While his teammate Mike Evans scored over 100 more Dynasty Owner fantasy points in 2018 (286 for Evans vs. 185 for Godwin), he did so for twenty times as much in salary ($16.5 million for Evans vs. $821,041 for Godwin). This combination of low salary and good production made Godwin the sixth most valuable WR in 2018 on a cost per point basis.

Appropriately, the fourth WR on this list of value WR is the guy who made me have to write “four out of five” twice in the opening paragraph of this section – Tyler Boyd of the Cincinnati Bengals. Boyd is the only value WR in this section with a salary of more than $1 million ($1.064 million) and is a free agent next year. However, he had the most Dynasty Owner fantasy points of the value WRs (221 points) which slots him just behind Godwin in value.

Last but not lease is the WR had the highest cost per point of the five value WRs since he also only played half of the 2018 season. That’s right, it’s Cooper Kupp of the Los Angeles Rams.

In only eight games in 2018, Kupp caught 40 passes for 566 yards and 6 touchdowns for a total of 135 Dynasty Owner fantasy points. Projected over an entire season, he would have just missed making the top nine into a top ten, but even in half a season, Kupp still had a value of just over $7,000 per point.

Many of the wide receivers at the top of the stat sheet are also the ones cashing some of the biggest checks on payday. It appears that Dynasty Owners may have to pay top dollar to get the top producers at the wide receiver position since six out of the top nine point scoring WRs in 2018 also had some of the highest salaries for the position.

However, there are WRs out there who can help your Dynasty Owner team at a major discount if you look around and focus your attention outside of the top nine. They may not score as many points, but they also aren’t going to cost you $14 million to $16 million in salary cap space. Are they worth a high draft pick come Dynasty Owner Draft Day or should you wait and draft your team a running back or quarterback first before turning your attention to wide receiver?

The good news is that you get to make the decision. You’re the Dynasty Owner!