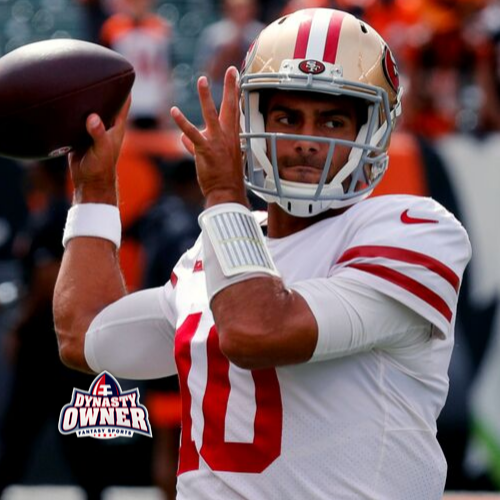 Week 2 of the first season of Dynasty Owner is over and it certainly was a wild one. A game-winning, 54-yard fourth down TD by Julio Jones to help the Falcons beat the Eagles, a controversial last minute game winning FG in the Broncos-Bears game and injuries to Ben Roethlisberger and Drew Brees highlighted the week.

Our Dynasty Owner Player of the Week is: Patrick Mahomes

Mahomes wins Player of the Week behind his Dynasty Owner best 47.1-point effort in Week 2 (443 yards passing, 4 passing TDs, -1 yards rushing, 1 fumble lost) against the Oakland Raiders. He may have won Player of the Week honors with just his second quarter performance alone (37.9 points – 278 yards passing, 4 passing TDs). Mahomes was the only QB to earn the 4-point bonus for passing for over 400 yards in Week 2. At an annual salary of $4.1 million for his Dynasty Owners, Mahomes only cost his Dynasty Owners just a shade $5,450 per point this week.

Congratulations Patrick on your first of likely many Dynasty Owner Player of the Week honors!

Because this is Dynasty Owner and we’re all looking for value from the players on our roster, we also have the Value Player of the Week. This week’s Dynasty Owner Value

Player of the Week is: Demarcus Robinson

After Sammy Watkins’ big Week 1 performance, it was another Kansas City WR who stepped up his game in Week 2. Demarcus got the likely his few Dynasty Owners 35.2 points (6 receptions, 172 yards receiving, 2 receiving TDs) for his low $714,293 annual salary.

The Free Agent Auction will likely be busy with Dynasty Owners bidding on this week’s Dynasty Owner Value Player of the Week!

Next, we look at those players who should have been in your Active lineups based on their performance in Week 2. We aren’t going to write that you should have started Patrick Mahomes or Saquon Barkley, since those are no-brainer decisions. Instead, these are players who might be on your roster, but likely weren’t Active in Week 2.

With his $27.5 million annual salary on the Dynasty Owner books through 2023, Jimmy Garoppolo might have gone undrafted in your Dynasty Owner league. After his Week 2 effort (297 yards passing, 3 passing TDs, 8 yards rushing, 1 INT), he might see an uptick in ownership as a replacement for Ben Roethlisberger or Drew Brees. Even so, he should have been Active if you had him on your roster.

Mostert was expected to split time with Matt Breida in Week 2 after Tevin Coleman’s suffered a high ankle sprain in Week 1. The 49ers duo split carries pretty evenly (13 for Mostert and 12 for Breida), but Mostert’s work out of the backfield catching passes lands him on the Should Have Been Active list. Overall, Mostert had 24.1 Dynasty Owner fantasy points (83 yards rushing, 3 receptions, 68 yards receiving, 1 receiving TD).

For the second straight week, a Kansas City WR had the most Dynasty Owner points for a WR. This week, it was the Value Player of the Week Demarcus Robinson who had 6 receptions for 172 yards receiving and 2 receiving TDs. Since he only had 1 reception for zero yards in Week 1, Dynasty Owners can’t be faulted for not having Robinson Active this week.

Honorable mention to Emmanuel Sanders (28.8 points – 11 receptions, 98 yards, 1 receiving TD, 1 2-pt conversion) who pulled through for his Dynasty Owners who didn’t pay attention to my recommendation that he should be on your Bench this week.

After his honorable mention last week, Mark Andrews may have been Active in more Dynasty Owner lineups in Week 2. However, after his second consecutive 20+ point week with 8 receptions, over 100 yards and a touchdown, he should be in someone’s Active lineup in every Dynasty Owner league in Week 3. This week, Andrews had 8 receptions, 112 yards receiving, 1 receiving TD and one fumble (not lost).

Honorable mention to Will Dissly (22.0 points) who had 5 receptions for 50 yards and 2 receiving TDs from Russell Wilson in Seattle’s 28-26 victory over the Steelers.

Bears fans rejoice! You might have found a kicker!

Pinerio nailed a game-winning 53-yard FG as time expired to give the Bears a 16-14 victory over the Broncos. After only scoring 2 Dynasty Owner fantasy points in Week 1, Pinerio likely was not owned by many Dynasty Owners, but since he was kicking in the thin air at Denver this week, he probably should have been owned by more Dynasty Owners and Active.

For every player who should have been Active but wasn’t, we have a player who probably was Active, but was better left on your Bench. Everybody who drafted Patrick Mahomes, Saquon Barkley and Alvin Kamara had them Active this week, but here are some other likely Active players who should have been riding your Dynasty Owner Bench in Week 2.

Mea culpa time as I touted Carr as a guy who should be active in my Week 2 preview article (https://bit.ly/2mgJqAF). Instead, he should have stayed on your Bench as he only produced 10.7 Dynasty Owner fantasy points (198 yards passing, 1 passing TD, 18 yards rushing, 2 INTs, 1 fumble – not lost).

Duke only had 6 carries for 31 yards. However, Duke usually gets his fantasy points through the air and after seeing Kansas City running backs score 13.4 Dynasty Owner fantasy points (8 receptions for 54 yards) versus Jacksonville in Week 1, his Dynasty Owners can be forgiven for thinking Duke might be in line for a similar number of points in Week 2. However, he put in a very atypical receiving performance with zero receptions meaning he was best left on your Bench.

Dishonorable mention to Christian McCaffrey who only scored 7.3 Dynasty Owner points (37 yards rushing, 2 receptions, 16 yards receiving) in Week 2. Unless you also have Saquon Barkley and Alvin Kamara, you likely started McCaffrey, but his point total this week was only worthy of a spot on your Bench.

With a tasty matchup against an awful Dolphins defense, Gordon may have been Active in many Dynasty Owner lineups despite the presence of Antonio Brown in the Patriots Week 2 lineup. Gordon should have been on the Bench instead since he had only 2 receptions for 19 yards in Week 2.

We didn’t forget that O.J. pulled the Blutarsky with a 0.0 Dynasty Owner fantasy point effort on Thursday night. He didn’t even have a target in Week 2 after having only 4.2 points in Week 1. It’s safe to say that O.J. should have been on your Bench this week.

For the second straight week, Vinatieri cost his Dynasty Owners a point and should have been on the Bench (or better yet, the Practice Squad). This week, he missed two PATs and only made one, fueling speculation that he may retire (https://bit.ly/2lU5wsG).

On the other hand, a trip to the Free Agent Auction was recommended for Papagiorgio and it’s really needed now as Adam Vinatieri had another -1 point performance. His only backup kicker Jason Sanders had no opportunities to score points this week and finished with zero points.

The Dynasty Owner projections had this as a close game, predicting Papagiorgio would edge out Teddy Ruxpin by .5 points. In reality, Mr. Ruxpin pulled out a close victory, putting my Dynasty Owner Match-up of the Week record at 0-2.

Thanks for reading and hope you’re not 0-2 in Dynasty Owner or any of your other fantasy leagues like I am in my predictions.