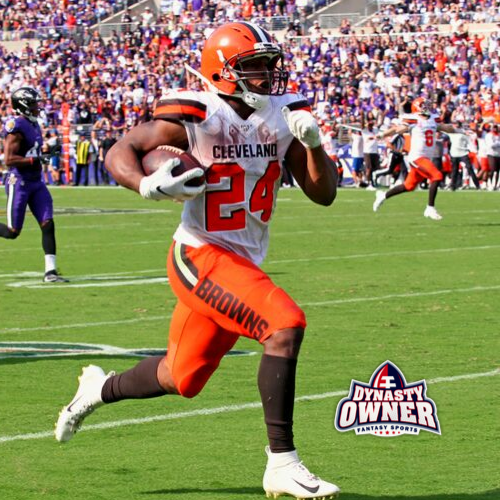 The first bye week of the football season has concluded and with it, the end of the winless seasons for the Pittsburgh Steelers and Don.. (Don). The Steelers beat their division rival Cincinnati Bengals for their first victory on Monday night, while Don.. defeated Jazz for his first Dynasty Owner victory.

Our Dynasty Owner Player of the Week is: Nick Chubb

Congratulations Nick on your first Dynasty Owner Player of the Week honors!

Godwin barely missed out on Player of the Week honors, but his low $821,041 annual salary and 41.2 Dynasty Owner fantasy points easily made him the Value Player of the Week. Godwin was questionable with a hip injury coming into Week 4 and Dynasty Owners didn’t know if he’d play or how well he’d play if he did suit up. Dynasty Owners who went ahead and put him in their Active lineup were rewarded with 12 receptions, 172 yards receiving and 2 receiving TDs.

We finally had a non-AFC West player win the Value Player of the Week honors. Congrats to Chris!

Famous Jameis had been improving every week in fantasy this season. He started off with only 6 points in Week 1, went up to 17.3 in Week 2 and then added 35.3 points in Week 3. He exceeded his Week 3 performance in Week 4 with 41.2 Dynasty Owner fantasy points (385 yards passing, 4 passing TDs, 1 INT, -1 yards rushing). The Rams defense put up little defense against Winston, Mike Evans and Chris Godwin this week and as a result, Winston should have been Active.

Way back on Thursday night, Howard had himself quite a game with 3 TDs (2 rushing and 1 receiving), 115 yards from scrimmage (87 rushing and 28 yards receiving on 3 catches) for a total of 32.5 Dynasty Owner fantasy points. Dynasty Owners can be forgiven for not having Howard Active as he’s part of the Eagles dreaded RBBC (Running Back by Committee) and through the first three games, he had only scored 20.8 Dynasty Owner fantasy points. He should have been in everyone’s Active lineup this week.

Many of the top scoring WRs this week were guys who should be Active every week in Dynasty Owner. However, all of his Dynasty Owners can be forgiven for leaving Jarvis Landry out of their Active lineups in Week 4 as he was averaging less than 10 Dynasty Owner fantasy points per game so far this year. If you left him on the Bench this week, you missed out on 8 receptions for 167 yards in three quarters of action in Week 4. Despite leaving the game with a concussion and not playing the entire fourth quarter, Landry played well enough to warrant a spot in everyone’s Active lineup.

Honorable mention to A.J. Brown of the Tennessee Titans. Brown only had 3 receptions, but 2 of them were for TDs. Brown had 94 receiving yards on those 3 receptions and finished with 24.4 Dynasty Owner fantasy points. He likely wasn’t Active in too many lineups, but should have been.

I’m surprised to report that Seals-Jones is owned in at least one Dynasty Owner league as Hog Hannah (Andy Rocco) in my league has him on his Practice Squad. Not sure how many other Dynasty Owners have Seals-Jones on their team, but after this week’s 17.2 Dynasty Owner fantasy point performance (3 receptions, 82 yards, 1 receiving TD), he’s sure to be on more in the coming weeks. With more bye weeks on the horizon, maybe even a few Dynasty Owners will have him Active, just as they should have this week.

Honorable mention to Gerald Everett of the Los Angeles Rams who is also on Hog Hannah’s roster and had 15.4 Dynasty Owner fantasy points (5 receptions, 44 yards receiving, 1 receiving TD). Few Dynasty Owners likely had Everett in their Active lineup this week, but more of them should have done so.

This week, Ty Long is the kicker who should have been Active on your Dynasty Owner team as he scored 16 Dynasty Owner fantasy points. He didn’t miss a kick as he had three FGs (44 and 45 yarders worth 4 points and a 51 yarder worth five points) plus three PATs. Long has been filling in for regular Chargers kicker Michael Badgely so far this season and likely wasn’t Active in many lineups, even though he was playing against the Dolphins.

The G.O.A.T. had been terrific this season until running into the Bills defense in Week 4. Brady threw for only 150 yards plus an INT and had -3 yards rushing for a total of just 4.2 Dynasty Owner fantasy points. He was clearly inside the Top 10 Dynasty Owner QBs after three weeks and is still in 10th place after this week’s performance, so if you have him, you likely had him Active when he should have been on the Bench.

While he only played three quarters before leaving with an ankle injury, Mack wasn’t productive in that time against the Raiders defense. Mack only rushed for 39 yards and had no receptions, despite 24 completions and 265 yards from Indianapolis QB Jacoby Brissett. Most of his Dynasty Owners likely expected more this week and had him Active, when he should have been on the Bench.

Nobody who drafted Smith-Schuster expected him to struggle this much so far in the season, even without Ben Roethlisberger for over half of it, but he has. This week, it was a measly 3 catches for 15 yards and only 4.5 Dynasty Owner fantasy points. Based on his low $1.05 million annual salary and 2018 production, he should have been a high draft pick and a no questions asked Active player every week. However, this week, he should have been on your Bench.

Dishonorable mention to Adam Thielen who had only 2.6 Dynasty Owner fantasy points (2 receptions for 6 yards) in Week 4. The Vikings passing game has been abysmal in 2019 and no one has suffered more than Thielen. Many Dynasty Owners may still be putting Thielen in their Active lineups, but he should be on the Bench until further notice.

If you spent $8.5 million in salary on Delanie Walker in Dynasty Owner, it’s not to have him sitting on your Bench. Well, that’s where he should have been this week after his 0.4 Dynasty Owner fantasy point effort (1 reception, 4 yards, 1 fumble – not lost). Adding insult to injury is the fact that the Titans had 3 receiving TDs and threw for 227 yards passing in their 24-10 victory over the Atlanta Falcons.

Gostkowski missed another PAT this week, giving him 4 missed PATs on the year. He did convert another PAT and a 23 yard FG to give him 2 points for Week 4, but his Dynasty Owners were probably expecting more from the kicker for the high-powered New England offense. That offense sputtered this week and so did Gostkowski who should have been on the Bench.

It was Don who pulled out his first Dynasty Owner victory this week, by a solid 120.3-108.7 margin over Jazz. Don maximized his points at every position, except kicker, and almost got the three point Coach’s bonus in the victory. Jared Goff led Don’s team with 29.9 Dynasty Owner fantasy points and Don started Jarvis Landry and reaped his 24.7 point performance as well.

On the other side, Jazz took my advice from the Week 4 preview article (https://dynastyowner.com/post/week-4-preview) and started Will Dissly at TE. It ended up costing him points as his Bench TE Austin Hooper put up more Dynasty Owner fantasy points this week than Dissly (22.0 for Hooper vs. 17.7 for Dissly). However, that move only cost Jazz 3.4 Dynasty Owner fantasy points, which was much less than the margin of victory in the game.

The main culprits in Jazz’s loss were the poor games he got from his starting WRs (9.8 points from Amari Cooper and 5.4 points from Sammy Watkins) as well as from QB DeShaun Watson (12.2 points).

My Week 4 prediction was wrong as I had Jazz winning, putting my record on the season at 1-3. As Coach Belichick would say “On to Week 5” and the preview article for me. Good luck to Jazz too in picking up his first Dynasty Owner victory next week.