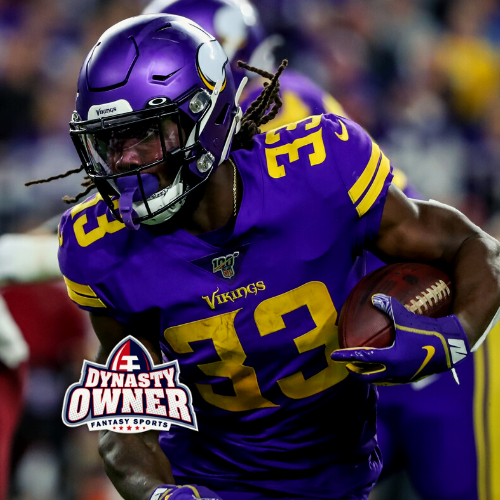 It’s finally time for the first Dynasty Owner playoffs! Congratulations to all of the Dynasty Owners who made it this far. Half of you will be eliminated from the playoffs as well as the Chase for the Ring, while the other half will move on to the Finals and remain in contention for the Ring and a lot of Dynasty Dollars. No more facing off against inactive teams who aren’t setting their best lineup. It’s the best versus the best in every league facing off to see who’s really the Best. And to illustrate that, we have a great Match-up of the Week on tap. Two teams with legitimate aspirations to win the Chase for the Ring will square off in a playoff Elimination game.

This is our fifteenth Dynasty Owner game preview article and the first one for the playoffs. As usual, we’ll take a look at our Match-up of the Week, highlight some interesting lineup decisions for each team and make a prediction on the winner and final score. We’ll also pick some players who should be in your Active lineup for the first week of the playoffs and some who you should Bench, as well as review last week’s recommendations.

First, we’ll look at last week and see how my recommendations worked out (Good, Bad or Just Ok). I recommended having the following players Active in Week 14:

Back to normal with two Good and two Bad recommendations after last week’s perfect set. These predictions are more important now. Let’s see if we can have a repeat performance of Week 13 with my recommendations of players who should be Active in the semi-finals of the Dynasty Owner playoffs.

Even though he’s the G.O.A.T., Brady is just the #14 ranked QB in Dynasty Owner this season, meaning that he’s not an automatic Active player. With the Patriots offense not clicking on all cylinders the past few weeks, Brady has been mediocre and averaging only 18.0 Dynasty Owner fantasy points since the Patriots Week 10 bye. However, Brady and the Patriots are mad that they lost to the Chiefs last week and get a break this week as they are facing the Cincinnati Bengals. Brady has thrown an average of 40 passes per game this year and even though the Bengals run defense is the worst in the NFL, Brady will probably still pass a lot. And probably throw for at least 2 TDs. And stay in and play the entire game and continue to rack up fantasy points, even if the game is out of reach. Put Brady in your Active lineup this week.

In five games with the Cardinals, Drake has averaged 17.2 touches per game. Even with both David Johnson and Chase Edmond back in action last week, he got 14 touches. He plays this week against a Browns defense fresh off allowing Joe Mixon to get a season-high 29.6 Dynasty Owner fantasy points (146 yards rushing, 3 receptions, 40 yards receiving, 1 rushing TD). Drake won’t do as well as Mixon did, but should still have a good enough day that he should be in your Active lineup.

Detroit is down to only three WRs on their roster right now after placing Marvin Jones on IR. Last week, they put TE T.J. Hockenson on IR. Somebody besides Kenny Golladay has to catch passes for the Lions this week, right? So, why not Amendola? Their depleted receiving corps also gets to play against one of the worst pass defenses in the NFL in the Tampa Bay Buccaneers who are allowing an average of 278.8 yards passing per game. Amendola has eight targets in each of the past two games from rookie QB David Blough. Amendola should be Active this week, even though he is currently rostered in only one Dynasty Owner league (2% ownership).

Ever since Greg Olsen left the Panthers game with Washington in Week 13; Thomas has caught 9 passes for 81 yards and a TD (23.1 Dynasty Owner fantasy points). Olsen needs to pass the NFL concussion protocol to play, leaving the opportunity for Thomas to step up once again against Seattle. Seattle has been pretty bad against TEs all season and given up an average of 21.2 Dynasty Owner fantasy points to TEs since their bye week. Thomas probably won’t get that many points, but he’ll get enough to warrant being Active.

Now, let’s look at last week and see how my Bench recommendations worked out (Good, Bad or Just Ok) for Week 14 when I recommended having the following players on the Bench:

Another week in which I did better with my Bench recommendations as three of them were Good and only recommending Todd Gurley be benched was bad. Hopefully this week’s Bench recommendations are just as good or even better since it’s the playoffs. Here are some players who Dynasty Owners drafted to use or have been using in their Active lineup, but would be better if they sat on the Bench during the playoff semi-finals.

Brown was doing well in the first ten games of the regular season, averaging 16.2 Dynasty Owner fantasy points per game. His production has slipped in the past three games to an average of just 10.2 Dynasty Owner fantasy points per game. However, he got 8.8 of those points from a trick play TD pass on Thanksgiving against the Cowboys and only has caught 8 passes for 91 yards the past three weeks. This week, he has to face the Pittsburgh Steelers defense that has held opponents to under 200 yards passing in eight of the past ten games. It’ll be tough for Brown to put up too many points this week, so leave him on your Bench.

We are dealing with a limited number of healthy Top 10 TEs this week with Jared Cook and Greg Olsen both hurt and unclear on whether or not they are going to play. Therefore, the only logical choice is to pick Hooper since he’s facing the defense that has allowed the fewest yards to TEs this season (San Francisco). Hooper is also still working his way back from a sprained MCL and didn’t have a great game last week with only 5.2 Dynasty Owner fantasy points (2 receptions, 32 yards). Bench Hooper this week.

Dynasty Owner Match-Up of the Week

Day Drinkers vs. The Replacements

Some quick thoughts about this match-up:

The exclusive Dynasty Owner scoring projections based on the current lineup for each team has The Replacements winning by a 139.4-128.7 margin. These playoff match-ups are tough to predict as both teams have plenty of really good players in their Active lineup and on the Bench. Even though The Replacements are the fourth seed in the playoffs, this isn’t an upset.

My regular season prediction record was 10-6 after a sweep of the three Match-ups last week. Check out the Playoffs Semi-Finals Recap article next week to find out which team advances to their league title game and kept their Chase for the Ring chances alive.