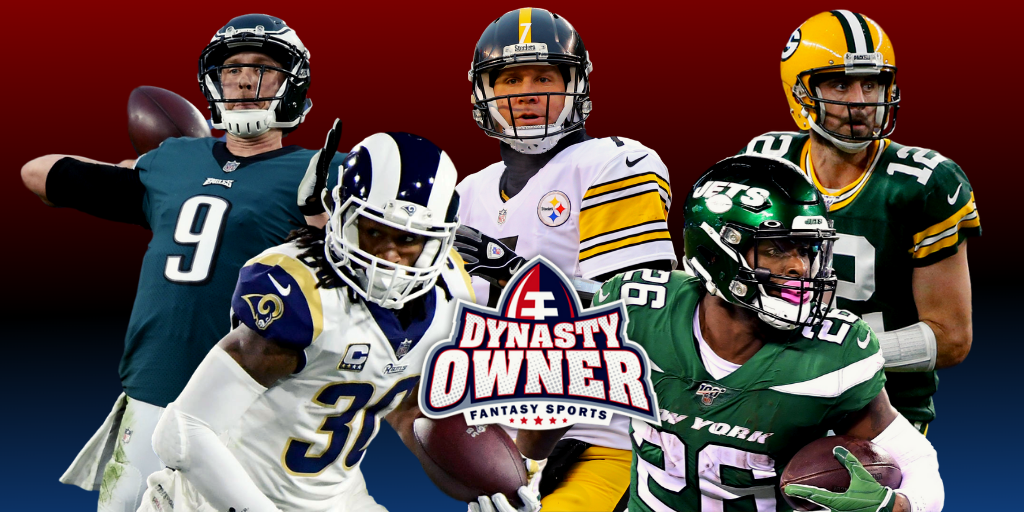 With the announcement of an amnesty provision for the 2020 Dynasty Owner season, Dynasty Owners should start thinking about what players on their current roster aren’t worth the cost of their salary and should be removed free of charge. The introduction of an amnesty provision for 2020 is important as some owners will be trying to fit under the $110 million salary cap for 2020 after possibly going as high as $120 million with their 2019 salaries.

There are a lot of players with big salaries in the NFL and some of those players will likely be released in the coming days and weeks. However, many high salary players might not be released, and that salary could still be sitting on your Dynasty Owner roster for 2020 and taking up valuable salary cap room. Room that Dynasty Owners could use to improve their team or pay for salary increases for better players.

Aaron Rodgers and his $33.5 million salary for the next three seasons is the top choice for a QB to use the amnesty provision on. The argument for getting rid of Rodgers is pretty simple. Are his Dynasty Owners getting $33.5 million worth of production from Rodgers or not? Rodgers was the highest salaried player in Dynasty Owner in 2019 and is tied for third highest right now with Jared Goff, only trailing Russell Wilson and Ben Roethlisberger.  At $33.5 million, he’s taking up over 30% of your $110 million Dynasty Owner salary cap. Rodgers is rostered in 57% of Dynasty Owners, which is high based on his hefty salary.

In terms of production, Rodgers was the seventh best QB for the entire 2019 NFL season and ninth overall best player. Is he going to improve in 2020 at age 36 in the second year in Coach Matt LaFleur’s offense? If the answer is Yes!, then read no further. However, more likely than not, he isn’t going to be better than most of the six QBs who finished ahead of him in 2019 (Lamar Jackson, Dak Prescott, Russell Wilson, Jameis Winston, Deshaun Watson and Patrick Mahomes). And who knows if he plays well enough to stay in the Top 10 in 2020.

If you have Rodgers on your roster as your #1 QB, you’re probably reading this and saying, “That’s fine, but who am I going to get to replace Rodgers as my starting QB if I drop him?” Great question!

Can Dynasty Owners Count on Cam in 2020?

That’s the question for Dynasty Owners with Cam Newton on their roster. A surprisingly high 80% of Dynasty Owner leagues have an owner with Newton and his $20.76 million salary on their roster. While it’s possible that Newton gets released in the off-season, it’s also possible that the Panthers keep him around for another season. After an injury plagued 2019 in which he didn’t look like the Cam Newton who electrified the NFL a few years ago, can Dynasty Owners afford to keep paying him nearly one-fifth of their entire team’s salary?

Even though his $20.76 million salary is only for one more year and he’s just the 16th highest paid QB in the league, Dynasty Owners can do better. If they have some salary cap room, Cousins is a possible replacement, they could draft a QB in this year’s rookie draft or look at the available QBs in their league’s Free Agent Auction.

Lesser Owned Quarterbacks Who Deserve to be Released

There are also a couple of additional lesser owned QBs who also deserve to be sent packing using the amnesty provision if you are a Dynasty Owner who still has one of these guys on your roster:

To Amnesty or Not to Amnesty, That is the Question

David Johnson of the Arizona Cardinals is another amnesty candidate because of his $13 million salary for 2020 (fourth highest among RBs) and poor performance at the end of the 2019 season. The Cardinals effectively turned the RB position over to Kenyan Drake after he was acquired mid-season from the Miami Dolphins, ending Johnson’s tenure as the team’s top running back. Even so, the Cardinals say they plan on keeping him for the 2020 season.

The end of the year performance isn’t going to earn him his release by the Cardinals, even though Drake is a free agent. There are trade rumors about Johnson as well, which wouldn’t remove his contract from your Dynasty Owner team, but might help him better earn his $13 million salary and make him less of an amnesty candidate than if he stays with the Cardinals and they re-sign Drake. That’s why there is a question about whether or not to use the amnesty provision on Johnson.

I’ll Take Pass Catching RBs With One Year Left on Their Contracts for $5 Million, Alex

Question: Who are two primarily passing catching RBs Dynasty Owners might want to use their amnesty provision on?

First, we’ll talk about Duke Johnson who is owned in 95% of Dynasty Owner leagues and has a $5.2 million salary for 2020. Duke was the #30 RB in Dynasty Owner for 2020 and only produced six Dynasty Owner regular season games with more than 10.0 Dynasty Owner fantasy points. As the #30 overall RB, he slots as a fringe starter and bye week or injury replacement for his Dynasty Owners. That’s a lot for $5.2 million. It’s possible that he ends up as the top RB in Houston since both Carlos Hyde and Lamar Miller are free agents, but even if that’s the case, is he worth $5.2 million of your salary cap?

Second, we have Dion Lewis and his $4.95 million salary for 2020. Lewis is rostered in 63% of Dynasty Owner leagues, but produced only 65.3 Dynasty Owner fantasy points (4.1 per game) playing behind Derrick Henry, who is a free agent. It’s doubtful that the Titans will make him the lead back, but it’s also possible that they don’t release him and his big contract before Dynasty Owners can amnesty a player. If he’s still on the Titans roster and your Dynasty Owner roster, he’s a great amnesty candidate and you can use it wisely to save you nearly $5 million.

Lesser Owned Running Backs Who Deserve to be Released

There are also a couple of additional lesser owned RBs who also deserve to be sent packing using the amnesty provision if you are a Dynasty Owner who still has one of these guys on your roster:

There is no shortage of backs, both QBs and RBs, who are prime candidates for Dynasty Owner salary amnesty. Dynasty Owners with one of these players on their roster could save several millions of dollars in valuable salary cap room by smartly taking advantage of this provision for the 2020 season. Aaron Rodgers, Todd Gurley and Le’Veon Bell top my personal list of players who should be considered prime targets for the amnesty provision, but there are plenty of others out there as well who are owned in 50% or more of Dynasty Owner leagues and likely not being released by their NFL team.

Part 2 covering receivers (WRs and TEs) who are prime amnesty candidates is coming soon. And there’s more great Dynasty Owner specific content coming on a regular basis during the Dynasty Owner “off-season” between articles, podcasts and Twitter. Thanks for reading and go start getting ready for the 2020 Dynasty Owner season!