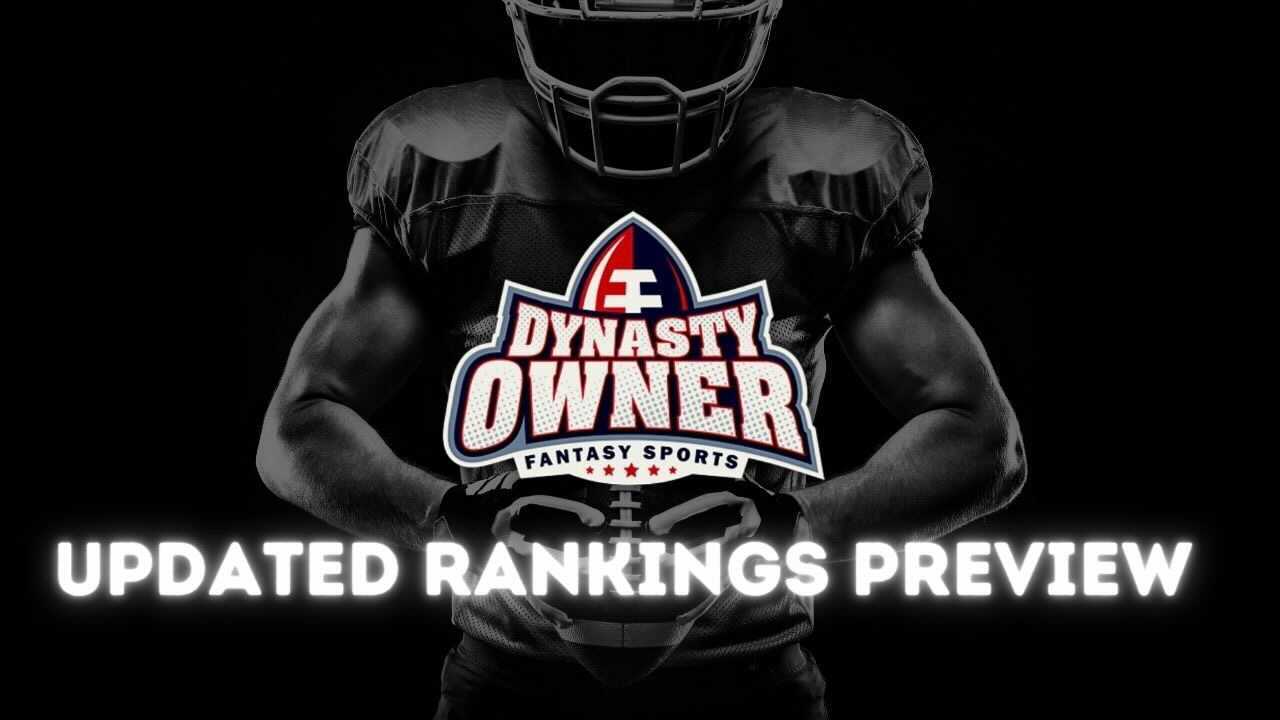 Hey all.  The NFL has thankfully completed another week which means we are that much closer to the Dynasty Owner playoffs.  Not only are we one step closer to the championship, but we also may start looking towards the offseason.  During the offseason, there are still many ways to remain active on Dynasty Owner including completing trades, making free-agent acquisitions, preparing for your rookie draft, and tracking new or updated contracts.  We all know that in redraft leagues there is essentially nothing to do during the offseason.  Keeper and regular dynasty leagues certainly require more offseason attention than redraft, but neither of those compares to Dynasty Owner offseason.  The biggest stressor most teams will face in the offseason will be the realization that you may not be able to keep all your current players due to contract changes.  Suffice it to say, it’s never too early to start preparing for next year even if you are in the “hunt” this year.  For this reason, today I will be giving a sneak peek of my updated Dynasty Owner ranks.

To be honest with you, I think these rankings can be beneficial for this current season as well.  Hopefully, they help you determine value on players that may have progressed or regressed through the first seven weeks.  Full rankings will be released in the coming weeks, but I wanted to share some of my initial thoughts after updating.  I’ll be listing off the Top 10 at each position as well as giving the “Biggest Movers” in each position.

Lamar Jackson remains my number one player overall.  Yes, I know, he has had a disappointing season so far.  However, his contract is as favorable as you can get especially at the quarterback position.  He still has a massive upside each week with a high floor due to his rushing yards.  He is currently the QB 16 on the year.  I still anticipate a Top 10 finish when the season is over.  I stand by my preseason assertion that Mr. Jackson is the most valuable player in Dynasty Owner.

Kyler Murray jumped three spots to number two overall.  He is second in points only to Russell Wilson.

Patrick Mahomes slid 25 spots from the preseason 12th overall to 37th currently.  The majority of his drop has nothing to do with his play, but rather his $45,000,000/year contract that is looming.  His payday will kick in in 2021 and with every game that passes in 2020, Mahomes’ value drops.

Justin Herbert and Joe Burrow have both jumped in the rankings.  In fact, no quarterback in the Top 10 made a larger leap than Herbert.  I was high on him coming into the season, and I even drafted him in one of my Dynasty Owner leagues, but what he has done in five games is truly unbelievable.  Through the five games, he has started, he has 1,542 passing yards, 12 passing touchdowns, 121 rushing yards, and two rushing touchdowns.  This is a small sample size, no doubt, but I’ve seen enough to move him up to QB 6 in DO.

The biggest movers since the preseason are Derek Carr and Dwayne Haskins.  Carr is currently QB 17, but he has shown a very solid floor throughout the young season.  His average fantasy output is 25.4 points and at $25 million/year, he’s becoming a value.  Dwayne Haskins looked to be one of the best options for a cheap QB2 option coming into the season.  Poor play and the fact that he was benched makes him impossible to start, but he should still be rostered.

Christian McCaffrey comes in as my number one Dynasty Owner running back.  The high ankle sprain that he suffered in Week 2 hurt his fantasy outlook, (especially for the short term) but Carolina has been conservative with his recovery and return.  I truly believe CMC will not return to action until he and the team doctors deem him one hundred percent.  It also helps that Mike Davis has been a worthy substitute.  Regardless, when CMC is on the field, he is the best at his position.

Alvin Kamara moves up four slots due to his dominant start to the season.  Kamara leads all position players (RB, WR, TE) in fantasy points at 172 and the next closest is Tyler Lockett at 147.  Kamara is also past his bye week.  The only reason Kamara isn’t number one overall is…(you guessed it) his pending salary next season.  Kamara’s yearly salary will be 15 million/year starting in 2021.  Even still, Kamara would be a value at that price this year.

The majority of running backs moved one spot or less.  CMC, Josh Jacobs, Clyde Edwards-Helaire, Dalvin Cook, Miles Sanders, and Ezekiel Elliott, to be specific.  The running back who moved the most in the Top 10 is Derrick Henry.  I was skeptical that Henry would end up this high in my rankings for two reasons.  First, he receives low volume as a receiver.  Second, his contract is the top three in terms of expense for a running back.  I know how good of a downhill, pure runner Henry is, but I feared (and still fear) that his lack of receptions will end up limiting his upside.  But for now, he has earned the final spot in my Top 10.

The biggest movers since the preseason are James Robinson and Lamar Miller.  When Leonard Fournette was waived by Jacksonville, that paved the way for undrafted rookie James Robinson’s first-half dominance.  Even after the news of Fournette’s release, the backfield situation was far from clear.  The assumed starter was Chris Thompson, but he has been unable to amass more than 7 touches in any game.  James Robinson has been the workhorse back all season where he has seen over 19 touches a game on average and is currently the RB 3 on the season.  I could lie to you and say that I saw this coming, but I don’t think anyone did.  He jumps 395 spots from unranked to 45 and takes the title of Biggest Mover of any player in my rankings.  Lamar Miller was not high in my preseason rankings but definitely deserved to be drafted.  He signed with New England on August 10th and was subsequently cut by the Pats on September 5th (the day my final preseason rankings were published).  There isn’t much fantasy implication here, but I wanted to highlight how quickly rosters can change.

DeAndre Hopkins, Davante Adams, and Michael Thomas are the three “expensive” wide receivers.  Hopkins and Adams’ seasons speak for themselves.  When they are healthy, they are both top-five options each week.  Michael Thomas is the outlier here.  He has missed games this season for a variety of reasons including an ankle injury, disciplinary reason, and now a hamstring issue that could linger past Week 7.  All of these concerns are the reason he dropped from 13 overall to 27 overall.  However, when Thomas returns to the field (whether it’s sooner or later) he should return to elite status beside Hopkins and Adams.

The remaining seven players are all “cheap” options with D.J. Moore being the most expensive at $2,792,829/year.  It should be no surprise that any of these seven are currently in my Top 10 due to how high they were being drafted and the fact that they are all young.  Godwin and Golladay find themselves at the bottom half of the list solely due to their impending contract extensions that will both start in 2021.

Coming into this 2020 season I found that I struggled most with finding out how to compare high-cost receivers with low-cost receivers.  I feel like I found a good balance in the end.  For example; In Dynasty Owner, it is very difficult to compare Davante Adams and D.J. Moore.  The large gap in contract amount has to be accounted for, and at some point, an owner has to decide when that expense is worth it.  I can honestly say that, in a vacuum, I would prefer to own Adams over Moore in DO.  In the same way, I can honestly say that I would rather own Terry McLaurin over Michael Thomas.  These comparisons become clouded when you factor in available cap and team needs, but there has to be a starting point.

The biggest movers since the preseason are Travis Fulgham and Trey Quinn.  Hopefully, you took my friend Jay Poundsee’s (@JayPoundsNFL) advice and picked up Fulgham when he was still 4% owned.  He is currently 96% owned in Dynasty Owner and seems to be locked in as the WR1 for the Eagles.  He has jumped from unranked to 97 overall and WR 42.  The departure of Desean Jackson to IR and the return of Jalen Reagor gives mixed messages on how productive Fulgham will be for the rest of the season.  However, with a floor of 12 fantasy points per game, continue to start him.

Mark Andrews and Travis Kelce swapped spots in the rankings.  We knew coming into this season that Andrews wouldn’t have the most volume at the tight end position, but we also knew how efficient he was in 2019.  So far this season his games have either been boom or bust.  Boom or bust isn’t the worst-case scenario when dealing with tight ends due to the position scarcity, but it’s not what we look for from the #1 overall tight end.  For that reason, Andrews dropped slightly, and Kelce has risen a bit for his consistency.

Of all the mid salary tight ends, none ranks higher than Darren Waller.  Waller is currently the TE 3 on the season with 89 fantasy points while having already completed his bye.  If you own Waller, you know that he isn’t cheap to own ($7,450,000), but his production thus far has made him a value.  While his overall rank didn’t change much, he did jump from TE 6 to TE 4.

The biggest movers since the preseason are Robert Tonyan and Chris Herndon.  Tonyan is the TE 9 on the season in large part to his massive Week 4 performance.  In Week 4, Tonyan put up six receptions for 98 yards and three touchdowns.  Yes, this is an outlier week that inflates his overall rank, but it still happened, and it can’t be thrown aside.  He has shown to be a reliable pass-catcher on a team that is in need of a pass-catching tight end.  Tonyan has the skill to be that man, and I adjusted my rankings to reflect that possibility.  Chris Herndon is one of the players I’m most disappointed in this year.  I had very high hopes coming into the season, and I actively targeted him in all my Dynasty Owner mock drafts and real drafts.  Unfortunately, I was able to obtain him in both of my leagues where he has put up only 2.8 fantasy points per game.  Herndon is impossible to start for the rest of the season.  For his sake, I’m optimistic that a better head coach will make use of him, but I honestly don’t know at this point.  He has fallen so far in so little time.

I hope you enjoyed the preview of my updated rankings.  Look for Dynasty Owner’s full updated ranks in the weeks to come.  Hope everyone is staying safe.  Take care.