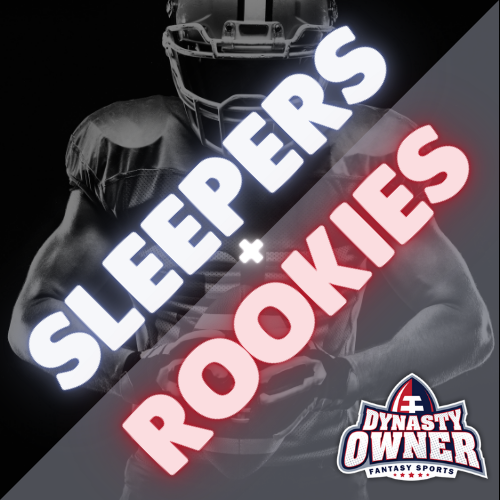 Welcome back everyone and thank you for returning once again. It’s a cliche thought, but this season has really “flown by.”  We are through fourteen weeks, and there are only two weeks remaining in our fantasy season. Soon we will celebrate the new year as that is only half a month away, but we still have work to do. We still have to win many of you a Dynasty Owner Championship, and we have to win a single Owner something much more. Yes, we are two weeks away from crowning a new Chase for the Ring Champion.

I am, however, well aware that many more are not competing for a championship or The Ring. In fact, at the time of this writing, the Dynasty Owners still in contention for a league championship are one third of what they were at the start of the season. That’s right, our twelve team leagues have all been cut down to four teams. For this reason, I am going to, symbolically, split my article into thirds. One third of my article is going to break down info that I think would be more beneficial to teams that are still competing for a title. Two thirds of this article is going to discuss my outlook on select rookies, and my positional DO rookie rankings. Let’s get to it…

For the first part of this article, I’m going to talk about some of the top fantasy performers over the past few weeks and how these “hot” players can help win championships. As I mentioned in my previous article, everyone knows that we are unable to make any trades or acquisitions until the championship has finished. For this reason, it does no good to talk about trying to trade for or pick up a player. Instead, I’m going to take a deep look at some sleepers that are rostered, but they may not have been started for most of the season.

All of these stats are true, and I am Curtis Samuel.

Samuel is quietly putting together a respectable season. His name isn’t flashy, and he wouldn’t have much trade value, but he has been above average for Dynasty Owners. Yes, some of Samuel’s success occurred because Christian McCaffrey has missed all but three games this season. This is true, but I am unconcerned for a couple of reasons. First, there is no guarantee that CMC returns next week (or at all for that matter). Second, Samuel averaged three rushes per game when CMC was active. Three rushes per game is nothing to write home about, but when he receives these rushes they are (obviously) designed and in high leverage situations. I have Samuel as a low end WR2 for the remainder of the season and a lock to get you 10 points per game. Hell, he’s only fallen below 10 points once since Week 5. Not bad for a player that only costs you $1,613,421 this year.

Aiyuk is becoming more involved in the 49ers offense, and he looks to be heading toward an even bigger workload now that Deebo Samuel is possibly done for the season with a hamstring injury. Aiyuk probably isn’t a player that carried your team to the postseason, but he will be as reliable as they come for the next couple of weeks.

Let’s do one more before we segway into the rookie ranks for each position.

I feel real dirty suggesting this player is a sleeper, but given the position, you may not have few better options. The player I’m talking about is Dan Arnold. Arnold is a tight end that plays for the Arizona Cardinals. He is 25 years old and is only owned in 63% of Dynasty Owner leagues. Arnold has only 22 receptions and 313 yards on the season. So, why am I suggesting you start him?  I’m suggesting you start him solely on the fact that he has touchdown potential. Arnold has scored four touchdowns in his last four games. Even with that fact, he has averaged only 10.2 fantasy points per game over those four. He has four touchdowns but only six receptions. This means two things…First, Arnold is a very, very low volume receiving tight end. He isn’t going to put up a 7/55/2 stat line in any game. Second, he has five red zone targets in the last four games, and he has nine on the season.

Once again, I’m not saying Arnold is going to win your league, but he should get at least one red zone shot per game, and he can get you between eight and twelve fantasy points per game. At $615,000 this year, he should have been rostered in every league prior to the playoffs.

As I explained in my opening, I’m going to be giving a brief look at my updated rookie rankings. Hopefully this will help Owners get a good idea of how to value some of these players we were so high on to start the season. This should be especially helpful to Owners that have already been eliminated from any potential prize and that are looking forward to next season.

Rookie quarterback rankings have come a long way since the preseason. Joe Burrow was regularly taken in the middle to late second round. That pick was more than justified based on Burrow’s play before his injury, but as you can see there is plenty of lost value in the rest of the list.

Herbert comes in as my rookie QB1. This shouldn’t be a surprise especially if you read my article last week. Herbert has been sensational this season, and I don’t use that term often. Anyone that drafted him around the seventh or eighth round is more than happy with their pick.

It was a tough choice to place Hurts over Tua, but that’s where they landed. Hurts obviously has a very small sample size, and I don’t expect him to continuously rush for over 100 yards a game, but it was an impressive first start, nonetheless. Hurts has a bright career ahead of him, and it’s starting sooner than most people thought it would.

Overall, the rookie quarterback class is shallow, at least for fantasy production this year. I expect Eason, Love and Fromm to all have above average careers if/when they take over as a lead quarterback.

Rookie running backs have moved quite a bit as well. They have moved not only based on ranks but ADP too. Jonathan Taylor comes in as my number one rookie running back. We knew he had the talent and build to make an immediate impact in the NFL, but he hadn’t been given the workload we wanted to see. Well, over the past three games Taylor has 21 touches and over 23 fantasy points per game. He is a top twelve running back for the rest of the season, and purchasing him in the second round is finally paying off for Dynasty Owners.

It’s impossible to make this list without discussing James Robinson. By far the most impressive rookie running back this year, Robinson is making a case for Offensive Rookie of the Year. He is RB4 on the season and is averaging nearly 21 touches per game. There is no player in Dynasty Owner that has been more of a value than Robinson. Assuming Jacksonville doesn’t use an early draft pick on a running back, this dominance by Robinson should continue into 2021 and possibly beyond.

Clyde Edwards-Helaire, J.K. Dobbins and Cam Akers have all fallen in my ranks. Actually, I wouldn’t say they have fallen. It’s more appropriate to say that other players previously below them have risen. Looking at this list of seven running backs it’s hard to say that anyone of them is guaranteed to be better than the next. What I can say is this…I believe that all seven (maybe excluding Robinson) will have an expanded workload in 2021 as their teams start to realize they are all the best and most explosive running backs on the depth charts. There is a fine career for each of these backs.

I think it would be hard for anyone to argue that Justin Jefferson is not the number one rookie wide receiver in Dynasty Owner. He leads all rookie receivers in fantasy points (219) and the next closest is Chase Claypool (174). Jefferson has five games of seven or more receptions and five games of over 100 yards receiving. He has also scored one or more touchdowns in five games. Remarkable. Jefferson has shown the ability to be the number one on his team when he still has an actual number one playing next to him. I would take Jefferson over any other rookie wide receiver.

The rest of the list was a little difficult to piece together. I have Reagor and Jeudy as WR6 and WR7, and I feel pretty comfortable with that. The WR2 through WR5 are tough though. I have CeeDee second mainly because I predict Dak will return to Dallas next year, and if he does, Lamb will be a top 24 wide receiver overall. Chase Claypool had one massive week that accounts for 25 percent of his total fantasy points on the year. Now, I’m not taking that week away from him, but it is an obvious outlier. Claypool has been a very solid wide receiver on eight out of his thirteen games, but he also can “disappear” from week to week as well. I look for his role to continue to increase especially with the chance that JuJu Smith Schuster may not be a Steeler in 2021.

As it is with most years, the rookie tight end class has barely made a splash in 2020. The reason for this is probably far beyond my knowledge of NFL playbooks, but I think it has something to do with the fact that tight ends essentially learn two positions. I think of tight ends as an extension of the linemen, and the play calling schemes can be just as (if not more) complicated for tight ends. Along with this learning curve, most tight ends are also responsible for running routes. Now, I’m not saying that this is an impossible feat or that it can’t happen quickly, but it usually takes time.

With this being said, the most successful tight end this year (fantasy wise) is Harrison Bryant with 49 fantasy points. That’s not saying much as it puts him at TE39 on the season. Cole Kmet has risen up my rankings lately, and I see him as the tight end that will adjust to the NFL the fastest of the entire 2020 rookie class. Adam Trautman and Devin Asiasi are stashes. They should not be dropped, and hopefully they will be able to provide fantasy production within the next couple of years.

Thanks all, and I’ll catch you next time.