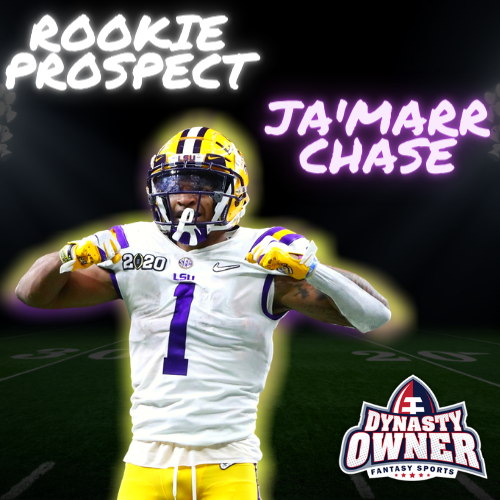 After a record season as Joe Burrow’s ($9,047,534) favorite target in 2019, Ja’Marr Chase decided to opt-out of the 2020 college football season to start his preparation for the NFL Draft. Some mysteries linger about his game after only a single breakout year, but the tape doesn’t lie, and Chase is arguably the best receiver in a talented and deep draft class.

2019 was an incredible one year showing for Chase as a true sophomore. Next to future-first rounder Justin Jefferson ($$3,280,701) and another intriguing 2021 receiving prospect, Terrence Marshall Jr, Chase put up some absurd numbers. He caught 84 passes for 1780 yards, an impressive 21.2 yards per reception, and found the endzone 20 times! His statistics and impact for the LSU offense earned him the 2019 Fred Biletnikoff Award (awarded to the best receiver in the nation) as well as a consensus spot on the All-American team.

With Chase sitting out the entirety of the 2020 CFB season, it will be interesting to see how he starts marketing himself when draft season starts to kick into gear. In today’s age, a player’s media value can be a factor in their value to a franchise and Chase and his agent know that. The hype around Chase has certainly died down a bit since last year when he was an integral part of the National Champions, but with a couple workout videos and well-edited cuts to epic music, Chase can be back in the national spotlight.

The combine will be his big chance to show that he was making the most of his opt-out and he will be expected to come into the weekend at peak physical condition. On tape I see a 4.5 40-Yard Dash, so if he can get down into the 4.4’s that would be a sign of his hard work over the past year. His height will also be something to keep an eye on as he could measure anywhere from 5’ 11” to 6’ 1”, and he should weigh in somewhere between 200-210 pounds.

At this point we can project that Chase is nearly a lock to be a Top-20 pick in the 2021 NFL Draft, pending an injury or a meltdown at the NFL Combine. Financially that means his rookie contract could look similar to Jerry Jeudy’s ($3,798,244). Jeudy signed a 4-year deal worth $15,192,974 after being selected 15th overall by the Denver Broncos. Also, as with all first-round picks, Chase’s contract will include a 5th-year club option for whatever team drafts him.

At the end of the day Chase is a player that could fit in any team’s offense and make an impact. At only six-foot he may seem a little small to be a prototypical X-receiver, but he plays bigger than his frame and can be a chain-mover for any team willing to throw the ball down the field. With his projected draft slot being early-mid 1st round, we can narrow down his landing spot to a couple different teams that will be looking for a new playmaker out wide.

One popular landing spot for Chase is the Miami Dolphins (who have two first rounders this year). Pairing Chase with Devante Parker ($7,625,000) and Preston Williams ($588,333) would give Tua Tagovailoa ($7,568,860) plenty of talent to help push the ball down the field.

Another popular team fit is the Detroit Lions who currently only have Quintez Cephus ($899,822) under contract for 2021. Kenny Golladay ($799,081) is set to become a free agent and with a new front office coming in, nobody knows what to expect. Chase could be given the chance to slot into a high-volume role if he finds himself in Detroit.

One more landing spot I’ll mention is the New England Patriots, a team that has a lot of questions moving forward. The quarterback situation is certainly a mystery, but if Bill Belichick looks to bring in a veteran such as Andy Dalton ($3,000,000) or even Sam Darnold ($7,561,929), grabbing a receiver with their first-round pick could be a great move to get them back in the playoff hunt. The Patriots offense has been hurting for a young weapon for a while and Chase would help any quarterback that ends up taking the snaps in Foxboro.