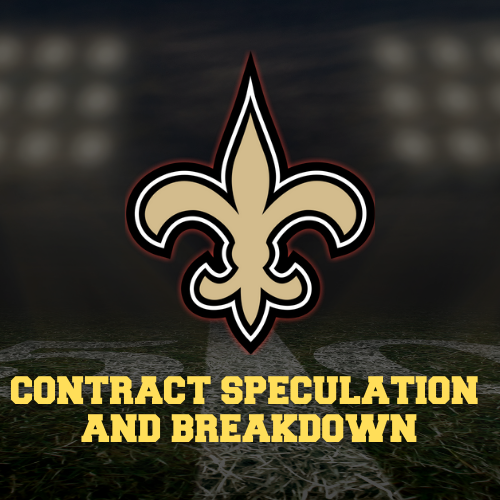 Once this article has concluded, we will have wrapped up the NFC South, and I’ll be bringing you a brand-new division next week. I think we’ll switch things up and give some love to the AFC next month. Not that it really matters as I’ll be discussing every team and potential free agent prior to kickoff of the 2021 season, but there are a few players in the AFC that I would like to speculate on prior to the opening of free agency. Speaking of the start of free agency…let me first discuss some important dates and times that Dynasty Owners should be aware about if they want to stay “in the know”.

This is the time when all teams must make a decision on whether or not they want to franchise, or transition tag a player. The difference between the two types of franchise tags and the transition tags matter in real life, but it doesn’t much matter for our purposes. I’ll oversimplify today and just lump all three of these tags into one. Regardless, as I said, after this time window, we will know who has been “tagged” in any fashion.

Picking up the day after the franchise window closes is the compensatory draft pick announcement. Compensatory picks are awarded to teams during this period based off of a measured and calculated formula. This formula looks at free agents that certain teams lost throughout the year that they were not “adequately compensated” for. Essentially, the NFL calculates each team’s gained and lost value and then compares this to every other team. Picks are awarded accordingly. This doesn’t affect us as Owners directly, but it has the potential to add picks to some of our favorite teams.

There are strict rules in the NFL (like most sports) about how and when a player may be contacted about a possible contract. Up until this date, teams are prohibited from contacting free agents. Again, this may not mean much to us as Owners other than the fact that we will probably be getting a heavy amount of rumors flying during this 48-hour period.

Minus the Draft, this has to be the most anticipated date in the NFL offseason. On March 17, free agents will be able to sign with the teams of their choosing. This applies to all free agents except for exclusive-rights free agents. This will be a great day and a great week as some of the contracts we’ve been anticipating will be signed.

These are all the events that are currently on my radar. It’s worth mentioning that the NFL Draft spans April and May as it will take place April 29 – May 1. Okay, let’s talk Saints’ free agents…

I currently have three “notable” Saints’ free agents that I feel are worth mentioning. As always, notable means players that I deem to be rosterable in Dynasty Owner leagues. I’m obviously not going to talk about defensive players as Dynasty Owner does not play IDP, and I won’t be talking about players like Michael Burton, Dwayne Washington or Bennie Fowler. These three, while offensive players, are not currently rostered in any DO league. The three I want to talk about are Jared Cook, Jameis Winston and Ty Montgomery.

Jared Cook is 33 years old. He is finishing a $7.5 million per year contract, and he finished the season as TE18. Fun Fact:  there were only two tight ends with higher salaries that finished lower in the rankings than him. Can you name them? Cook had a lackluster season although he did end with seven touchdowns despite a disappointing 58.33 catch percentage in the red zone. I wouldn’t dare declare that Cook has nothing left. It’s expected he’ll return for the 2021 season, but according to ESPN’s Mike Triplett, it’s unlikely it’ll be with the Saints due to “cap restrictions.”  I do agree. Cook is going to demand roughly the same contract that is about to expire. (Think Jimmy Graham’s contract)  This coupled with the fact that the Saints traded their 4th, 5th, 6th and 7th round 2020 draft picks to Minnesota in exchange for their 3rd round pick which they converted into Adam Trautman. I’m not going to break down Trautman in this article, but surely the Saints want to see him on the field at some point given the draft equity they invested in him. Expect Cook to move on.

Up next we have the possible starting quarterback for the 2021 Saints:  Jameis Winston. Winston signed a single year contract worth $1,100,000 last year. According to a lot of analysts, this deal seemed to be much less than he actually deserved. I would have to agree given the fact that he had just come off of a 2019 season where he had career highs in attempts (626), completions (380), yards (5109) and touchdowns (33). Unfortunately, he also had a career high in interceptions (30). Regardless, I believe that Jameis showed enough in 2019 to make him deserving of a contract closer to 10 or 12 million dollars per year. The rest of the NFL did not see it this way and he essentially signed a minimum contract with the Saints. Well, Jameis was unable to show much of anything during the 2020 season. Despite Drew Brees missing four weeks in the middle of the season, Jameis did not attempt a pass during those weeks. Instead, Taysom Hill received the starting quarterback job. In fact, Winston only completed seven passes for 75 yards in 2020. 63 of these yards came in the game where Brees was injured. Now for some speculation…

The expectation is that Brees will be retiring sometime this offseason. The fact that he agreed to cut his pay to the league minimum for the 2021 season paves the way for a retirement. This move drops New Orleans’ cap more than $20 million dollars. Jameis is too cheap not to hold until his contract situation is a little clearer. Hold with confidence, and I would even advocate trading for him if the price is right.

The final player worth mentioning is Ty Montgomery. I’m not going to talk much about him as he has yet to pass 121 touches in any season. In fact, he has averaged only 72 touches per season in his career. He is only owned in 8.25 percent of Dynasty Owner leagues so he’s a borderline player to even mention, but if he is signed by a team expect his salary to be between 2 and 3 million per year. Even though this is a cheap price to pay for a running back, I would still be staying away.

Today I have a single player that I want to talk about for my breakdown section. We’ve already discussed both potential starting quarterbacks in New Orleans and also their tight end situation so let’s now focus on a wide receiver. How about Emmanuel Sanders?

He has a single year left on his current contract that he signed in early 2020. The contract was two years’ worth $8,000,000 per year. There are a few different directions Sanders’ career could go in 2021. First, he could just play out the 2021 season with the Saints and then enter free agency in 2022 as a 34-year-old wide receiver. The second (and more likely scenario in my opinion) is that Sanders is cut by the Saints during this offseason. Even with the sly maneuver to reduce Brees’ cap hit in 2021, the Saints are currently projected to have the worst cap issues. Cutting Sanders would not solve all their problems, but it would free up roughly $4,000,000 in space. Again, I’m not claiming he will be cut, but it’s an option that the Saint’s organization is without a doubt looking into. With that in mind, let’s look at how Sander’s value compares to similar wide receivers…

So, I have these five players arranged by “value” or Dynasty Dollar per Fantasy Points (DD/FP). We, as Dynasty Owners, know that DD/FP is kind of the general value that a player holds. It is best used to compare players to each other. These five players finished right around each other for the 2020 season. I also included games missed to give you a reference for how their seasons may have looked had they played every game. We can see that Gallup was the player with the most value. This isn’t a surprise given that his salary is a fraction of the other four. His teammate, Amari Cooper, had a fantastic season and finished as the WR15. This is a very healthy season, but as you can see, his value is at the opposite end of the spectrum. The main point from this table was to show the two extremes of value with three “mid-level” salary players in the middle. Every Owner has to answer the question for themselves…

“Would I rather own Cooper or Sanders?”  The answer to this obviously depends on roster construction and where you see your strategy heading in the next few years, but from a value standpoint, Sanders is the answer. It’s not surprising that Cooper is owned in 20 percent more leagues either. People are willing to pay up for a known, rather than taking a cheaper unknown. Here is the final way I’m going to present this point.

Would you rather have 40% of Cooper’s salary with 70% of the fantasy production, or would you rather pay up the other 60% for 100% of his production? Because the former is what you would be getting with Sanders (at least in 2020.)  But wait, there’s more…

Keep in mind that Sanders played in two less games than Cooper as well. Making this argument could lead to someone, rightfully, claiming that Cooper didn’t have Dak throwing to him for an entire season though. All of this is true and worth keeping in mind as we move towards the new NFL season.

Thank you for reading and be sure to watch the video that relates to this article. Next week we’ll be starting a new division. I’ll turn my attention to an AFC team that has quite a few free agents as well as one of the more favorable cap situations. I’ll also be using a couple of new comparison strategies. Please follow us on Twitter @Dynasty_Owner and subscribe to Dynasty Owner on YouTube. Take care and be safe.