How to Draft a Dynasty Owner Championship Team – Part I

For the next few weeks, we will look at how Dynasty Owners drafted in 2020. By looking at the data of how the winners drafted relative to the rest of the teams in their league, we hope to discover some takeaways that can help everyone who is drafting a 2021 Dynasty Owner start-up team to win their League. We will also look at the “best of the best” and see how the teams that finished in the Top 25 of the Chase for the Ring drafted and find out if they went about drafting differently. Using these data, we can answer a bunch of questions and evaluate draft strategies, such as:

Which Type of Dynasty Owner League Had the “Best” Owners?

Which type of league had the “best” of the best Dynasty Owners in 2020? That means, was there a type of league (For the Love of the Game, $50 cash buy-in, $100 cash buy-in or beta) that had more of the Top 25 teams in the Chase for the Ring.  Beta league Dynasty Owners, who all played in 2019 and had a year of strategy under their belts, would argue that they are the best. However, would those beta league players be able to crack the Top 25 playing in leagues with only other beta owners? Does the data from 2020 support this idea or not?

Now, we know the answer. The best of the best in Dynasty Owner in 2020 were playing in $50 cash buy-in leagues. While just over one-quarter (27%) of leagues were $50 cash buy-in leagues, the winners in these leagues accounted for 11 out of 25 (44%) of the Top 25 in the Chase for the Ring. The $50 leagues were even more represented in the Top 10 as 6 out of 10 teams who finished in the Top 10, including Chase for the Ring winner Barbee Kilgore, played in $50 cash leagues.

The Beta leagues were evenly competitive. Beta leagues comprised nine percent of all leagues and eight percent of the Top 25 teams (PirateWolf in 14th place and BluecivicJJ in 15th place represented for the beta users).

Of course, Dynasty Owners in $100 cash leagues might argue that their leagues had better players because of the higher buy-in amount and were more competitive, which led to fewer Top 25 teams.

When Should You Draft Your Dynasty Owner Team?

Now that we know what type of league best suits you, the next question to answer is when is the “best” time to draft your Dynasty Owner team?  Is it better to draft as early as possible right after the NFL draft in May or closer to the start of the regular season in September? This question came up because the Chase for the Ring winner Viktor told me via email that he waited until “the last possible day to draft in order to have the most information about what NFL teams would look like”. While that ended up being a huge advantage for Viktor, did more Dynasty Owners do what he did and wait or did they start drafting as soon as they could in mid-June?

The answer appears to be No as a higher percentage of the Top 25 teams in the Chase (84%) drafted before roster cut day that drafted before that day (78%). Waiting to draft didn’t necessarily increase an Owner’s chances of a high finish in 2020.

How about waiting until after training camps opened? Training camps officially opened on a rolling basis with rookies reporting first, then quarterbacks and injured players. All veterans had to report by July 28th, so we’ll use that as our Training Camp Opening Day. Maybe waiting until Training Camps opened and some players had opted out of the 2020 season helped a Dynasty Owner make it into the Top 25 of the Chase?

Once again, the answer is No. The results are even more pronounced for the training camp date than for the 53-man roster deadline date. Three-fifths (60%) of the teams who made the Top 25 in the Chase for the Ring drafted before training camps opened, but less than half (44%) of all Dynasty Owner leagues drafted before that day.

Since we already know that more Top 25 teams drafted before training camps opened, then the next question is: How early is too early? Is going early not a liability towards the goal of making it into the Top 25 of the Chase for the Ring?

The first two Dynasty Owner drafts were on June 14th and the final two drafts were conducted after the first Thursday night game on September 10th, but prior to the first Sunday games on September 13th. There were around equal numbers of leagues that drafted in each month (June, July, August and September), but more Top 25 Chase teams drafted in June (36%) than leagues that drafted in June (23%). The same is true for July, but the difference is less pronounced (28% of Top 25 teams drafted in July vs. 23% of all leagues).

While waiting to draft clearly was the right strategy for Viktor, it’s not necessarily a strategy that new Dynasty Owners need to copy. The 2020 season shows that drafting early was actually better than drafting late on average.

What Draft Position is the “Best” One to Have in Your Dynasty Owner Draft?

In theory, there should not be a “best” draft position since all Dynasty Owner start-up drafts are snake drafts. In case someone isn’t familiar with the term, a snake draft is a draft that goes in the opposite order each round, so the team with the last pick in the first round has the first pick in the second round and so on. It’s supposed to equalize drafting so no team gets an advantage over another team, but how did that work out in the 2020 Dynasty Owner season? Does the data show that one draft slot produced more league winners than average, while another one produced fewer? Let’s see:

Of course, our 2020 Ring winning team Barbee Kilgore drafted from the #10 slot, the only Top 25 team to do so. More importantly, Viktor was able to draft Patrick Mahomes and his $4.1 million salary with his first pick, which in the end was probably more important than his draft slot.

So far, there doesn’t appear to be any magic formula associated with your type of league, draft date or draft slot. More Top 25 teams drafted early and played in $50 cash leagues, but no single draft slot was the dominant one that yielded an overwhelming number of League winners or Chase for the Ring Top 25 teams. While the Ring winner played in a $50 cash league and drafted from the #10 slot in a league that drafted after rosters were cut down to 53 players in September, his nearest competitor (Quaranteed for Greatness) had a different path. Quaranteed for Greatness’ path to being the runner-up saw him play in a For the Love of the Game league and drafting from the #6 slot in a late June draft, a month before training camps opened. They even drafted two different players (at different positions), which is a topic that we’ll dive into more in a future article.

The top two teams in Dynasty Owner took different paths to their respective League championships in 2020. Do you have a particular plan for your 2021 start-up team? What about a draft strategy that you think will lead you to a Championship and maybe a spot in the Chase for the Ring? Send those plans and strategies for 2021 Dynasty Owner success to me on Twitter (@SteveVT33) or post them in the comment section on YouTube.

My articles and videos on getting you ready for your 2021 Dynasty Owner start-up league team will be out on Fridays throughout the off-season. Keep an eye out for new articles and videos from the rest of our team of Dynasty Owners writers as well. On Mondays, Nate Christian (@NateNFL) will break down rookies in his Prospect Preview. Matt Morrison – The Jerk (@dynastyjerk) is back for another year and will do a deep dive into contracts on Wednesdays. Jay Pounds (@JayPoundsNFL) has his articles and videos on how to rebuild your Dynasty Owner roster on Thursdays. Read all of their articles, watch and like all of their videos on YouTube (and all of the other available formats, such as Spotify) and follow the four of us plus Dynasty Owner (@Dynasty_Owner) on Twitter. Thanks to everyone for following, reading and watching! 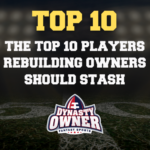 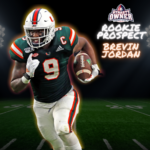