In a class full of talent, especially at the wide receiver position, it’s hard for a prospect to truly stand out among the rest. DeVonta Smith won the Heisman Trophy this past year and Ja’Marr Chase was key to one of the most prolific offenses in college history, there’s a spotlight on the top receivers in this class. Rashod Bateman meanwhile is flying under the radar, despite being one of the better receivers in this class. He’s not flashy, but that may be his best asset.

Last week I talked about Rondale Moore and how he dominated as a freshman. Bateman showed up his freshman year at Minnesota and established himself as a top receiver with 51 receptions for 704 yards and 6 touchdowns. His sophomore season he set school records with 60 receptions for 1,219 yards and 11 touchdowns, leading to a selection as the Big 10 Receiver of the Year. He initially opted out of the 2020 season but came back for 5 games and performed well.

Many people will be interested in seeing Bateman’s 40-yard dash time at the Minnesota Pro Day. But I don’t expect anything special, and it doesn’t really matter. What we see on film is a receiver who doesn’t win on speed and uses technique and savvy to get open down the field. If he runs a 4.6 nobody should start dropping him down rankings, it doesn’t change a thing. Also in the same vein if he comes out and runs a 4.4, it doesn’t change much for me either, he’s still exactly what we see on tape.

Some people will say Bateman is a first round pick, and I could see it happening, but I’m more likely to bet on Bateman slotting in just short of the first round at the top of the second. While it may hurt his stock to be a Day 2 pick, he’s a player like Tee Higgins ($1,974,270) last year who didn’t have the hype of the offseason leading up to the Draft and went under the radar. It doesn’t take away his immense talent and pro-ready skillset. I expect his contract to be similar to Higgins at around 4-years and $8,686,785. This could give Bateman great value in rookie drafts on the Dynasty Owner platform.

The first team that comes to mind for Bateman is the New York Jets at the 34th overall pick. Whether or not they keep Sam Darnold ($9,794,271) or draft a new quarterback at #2 overall, the offense could use plenty of help. Bateman would fit well with the current group of wide receivers there and would help any quarterback succeed. He’s a pro-ready player for a team that simply just needs more pro players. The Jets don’t have the opportunity to mess around with project players and how they develop, Bateman gives them someone who they can start Day 1, and truly help them rebuild their team.

Another landing spot I quite like is Philadelphia Eagles at 37 overall. If the Eagles pass on one of the top receivers at #6 overall I believe there’s a really good chance that they take one on Day 2. Bateman once again fits right into the offense and would compliment Jalen Reagor ($3,016,063) well. Bateman’s ability to get open quickly and find soft spots in the zone could work wonders for Jalen Hurts development as a passer. Bateman projects well as a safety blanket on any offense. 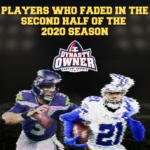 Players Who Faded in the Second Half of the 2020 Season 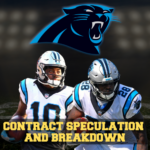