How to Draft a Dynasty Owner Championship Team – Part II 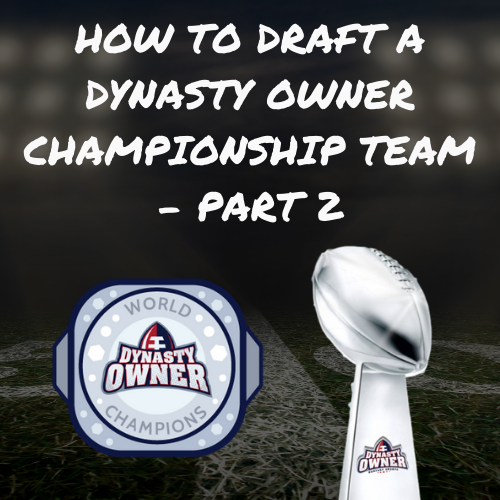 How to Draft a Dynasty Owner Championship Team – Part II

Last week, we started to look at how Dynasty Owners drafted in 2020 by analyzing data on three measures that didn’t involve individual players, positions or salaries (type of league, when to draft and what draft position to get in your start-up draft). We found that owners in $50 cash leagues were more likely to make it into the Top 25 in the Chase for the Ring, while those in $100 leagues were less likely. Waiting until close to the start of the season to draft worked for our 2020 Chase for the Ring champion Viktor, but on average, drafting early was actually better than drafting late as June drafts produced the most Top 25 teams. Finally, we examined draft position and found that four spots (#6, #8, #1 and #11) were better to draft from in 2020 as they produced a higher percentage of League winners, while three spots (#12, #7 and #2) were at the opposite end and produced fewer League winners. None of the data were overwhelming, but they started to answer some basic questions that might help you win your League and score enough points to make it into the Top 25 of the Chase for the Ring.

There is more data to analyze and more questions to answer. Here are the remaining questions and draft evaluation strategies that haven’t been answered yet from the first How To article:

This week, we’ll look at the positions and salaries of first round draft picks in 2020 Dynasty Owner leagues and see if any position was drafted by more League winners. We’ll also see if the player’s salary made a difference in a team’s chances of winning their League.

All salaries listed are from the 2020 Dynasty Owner season. Updated 2021 salaries will be posted on the Dynasty Owner website at the start of the new NFL league year on March 18th.

What Position Should You Draft with Your First Pick?

Does this mean that you should be drafting a QB with your first pick, so you are guaranteed to get one of the top scorers in the league in 2021? Or do you pivot to try and find a player at another position who will be near the top of the scoring chart? What did Dynasty Owners do in 2020?

Three out of every five (60%) of Dynasty Owner teams in 2020 drafted a RB with their first pick compared to just over one-third (36%) who drafted a QB. Few (5%) teams drafted a WR with their #1 pick while only a handful took a TE (George Kittle) or kicker (there was one kicker drafted in the first round, which we’ll assume was an auto draft situation or mistake).

Therefore, there doesn’t appear to be a preferred position between QB and RB to take with your Dynasty Owner first round draft pick. Just don’t draft a WR first if you want to finish in the Chase for the Ring.

How Much in Salary Should Your First Pick Make?

This is an important question for everyone who will be drafting a Dynasty Owner start-up in 2021. Do you “go low” with the salary of your first round pick and save your salary cap for some higher salary players later on or just draft your Dynasty Owner team like you would a regular dynasty team and take a high salary player in the first round if you think he’s the best player on the board?

Unlike some of the other measures that we’ve looked at where the data hasn’t been overwhelmingly in favor of one side or the other, we have a pretty clear picture on how much in salary your first pick should make.

It gets worse if we look at the Top 25 and Top 10 in the Chase for the Ring as no team who drafted a player with a salary of $10 million or more in the first round was able to crack the Top 25 in the Chase. In fact, none of the teams who finished in the Top 10 drafted a player making $5 million or more with Patrick Mahomes ($4.1 million) being the player with the highest salary among the five players taken by those teams (Kamara – 4, Mahomes – 3, Jackson – 1, Jacobs – 1, Mixon – 1).

These data help make the case for drafting a lower salary player as well since while just under one in ten (9%) Dynasty Owner teams drafted a player making under $1 million in 2020, it jumps to nearly one in five (18%) among League winners. The percentage jumps even higher among Top 25 Chase teams (32%) and Top 10 Chase teams (40%).

Looking at the top range of $10 million or more in 2020 salary means that a few of the people who drafted DeAndre Hopkins, Derrick Henry, Ezekiel Elliott or Michael Thomas and their big contracts won a League title. However, it was definitely not as many as drafted one of those guys, or someone else, who had a $10 million or higher salary in 2020. The data shows the percentage of League winners in that salary range was only 6%, down from 12% overall who drafted a player in that range. Nobody who drafted a player with a salary of $10 million or more in 2020 cracked the Top 25 Chase teams.

Furthermore, if you by chance took a QB making over $25 million with your first pick, you didn’t win your League. No one who took Aaron Rodgers, Russell Wilson or Tom Brady with their first pick was a League winner, despite the fact that all three of them finished in the top seven in Dynasty Owner scoring in 2020 and each had more than 450 Dynasty Owner fantasy points. This just goes to show that it’s not only about the points being scored by your first round pick.

Did Injuries Influence The Data and Skew Those Results?

Right now, some of you are saying “Injuries and a lack of performance probably played a huge part in those findings about salaries.” That may be true as Michael Thomas ($19.25 million) was injured for over half of the year and Ezekiel Elliott ($15 million) had a down season, while Alvin Kamara ($964,443) was healthy for the entire season. That’s a good point about Kamara as he was responsible for all of the League titles won by players who drafted a player making under $1 million. However, if that was the case, then the League title stats would be the same for injured players across all salary ranges, not just those making $10 million or more.

While more Dynasty Owners invested in either Elliott or Thomas with their first pick despite their very high salaries, they were drafted by League winners just as much as Mixon and Sanders. In comparison, more than twice as many teams who drafted Jackson or McCaffrey were able to win their League. In terms of the Top 25, we find four teams who drafted Jackson and made it on the list along with two who drafted McCaffrey and one each who selected Barkley and Mixon. Nobody who drafted Elliott or Thomas, the two highest salary players on this list, made the Top 25.

Remember that while Mixon and Sanders were selected in the first round by three percent of League winners just like Elliott, they were drafted in the first round in far fewer leagues. By drafting one of the top players with a high salary, Dynasty Owners in 2020 significantly reduced their chances of winning their League title and completely forfeited their ability to make it into the Top 25 in the Chase for the Ring.

The lesson to be learned is that everyone drafting a new Dynasty Owner team in 2021 should be wary about selecting a player with a high salary. It’s easier to still win with a low salary #1 pick who gets injured or underperforms than a high salary top pick.

While there wasn’t a magic formula associated with the type of league, draft date, draft slot, or even position drafted with your first pick, we did find that the salary of your first pick can make a difference in your chances of winning a League title. Dynasty Owners who drafted players with lower salaries in the first round were more likely to win their League title than those who drafted higher salary players. This is true regardless of injury or underperformance with teams who drafted players with salaries under $5 million more likely to overcome having a player miss a significant portion of the season or not play as well as projected than teams who drafted a player in the upper salary ranges.

Does this information change your 2021 draft plan? Do you think this will change in 2021 when some of the best players from 2020 like Patrick Mahomes and Alvin Kamara are making more in salary? Let everyone know by reaching out to me (@SteveVT33) or post your thoughts in the comment section of the video on YouTube.

My articles and videos on getting you ready for your 2021 Dynasty Owner start-up league team will be out on Fridays throughout the off-season. Keep an eye out for new articles and videos from the rest of our team of Dynasty Owners writers as well. On Mondays, Nate Christian (@NateNFL) will break down rookies in his Prospect Preview. Matt Morrison – The Jerk (@Dynastyjerk) is back for another year and will do a deep dive into contracts on Wednesdays. Jay Pounds (@JayPoundsNFL) has his articles and videos on how to rebuild your Dynasty Owner roster on Thursdays. Read all of their articles, watch and like all of their videos on YouTube (and all of the other available formats, such as Spotify) and follow the four of us plus Dynasty Owner (@Dynasty_Owner) on Twitter. Thanks to everyone for following, reading and watching!