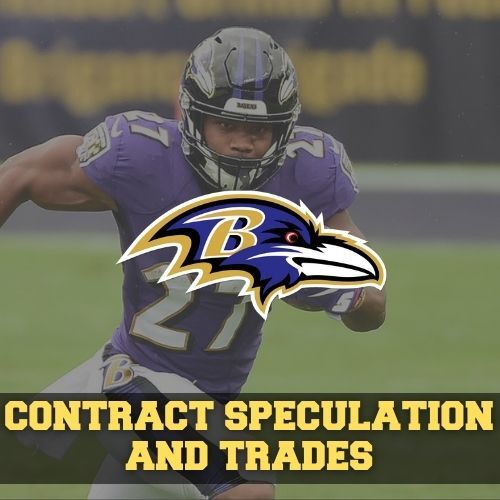 By the time you read this article, we will be almost a month into free agency.  A majority of free agents have already been signed, but some remain.  My articles over the past month have been frontloaded with signing news, and they have been taking up the majority of the articles themselves.  As news slows, I’m going to be bringing more breakdowns of players on the specific teams that I’m talking about.  Today, we will talk a little bit of news and then about the Baltimore Ravens.  The Ravens are a fitting team to talk about this week as they still have a couple (more than most) free agents from their 2020 team.  These free agents are semi-big names and are definitely worth a speculation discussion.  Before that though, let me catch you up on some recent news…

The biggest news of the past few weeks is, without a doubt, the Sam Darnold trade.  Darnold was traded from the NY Jets to the Carolina Panthers for a 2021 6th round pick, a 2022 2nd round pick and a 2022 4thround pick.  While Darnold finally escaped the grasp of Adam Gase, he will also leave the only NFL team he’s ever played for and join a Panthers team in need of a long term solution at quarterback.  There are many layers to this trade, so I’ll go through them one by one.

This is good news for Darnold, no doubt.  There were very few spots he could have gone that would have been a downgrade from New York.  With the Panthers, he will join the most talented NFL roster he has ever played with.  These players include Robby Anderson, D.J. Moore and of course Christian McCaffrey.  The future is bright for Darnold, and I expect a big career boost in 2021.

This is good news for the Panthers’ skill players as a whole.  Teddy Bridgewater has shown a lack of throwing the ball “downfield”.  In fact, in 2020 the Panthers ranked 22nd in the NFL in intended air yards.  They also ranked 22nd in intended air yards per pass attempt.  Carolina is in need of a quarterback that will push the ball down the field, and I have little doubt that Darnold will try to do exactly that.

Teddy Bridgewater is a player that clearly does not benefit from this trade.  I believe that Darnold is the more talented quarterback and that he will be the season long starter in 2021.  Teddy had his chance in 2020 (albeit with no CMC), and he underperformed.  He finished the 2020 season with 3,733 passing yards which ranked as QB17.  Look for the Panthers to move on from Bridgewater as $21,000,000 will be too much to pay for a backup quarterback.

Here is an odd signing in my opinion.  Sanu has signed with the 49ers.  If you remember, the 31 year old wide receiver played for San Fran in the beginning part for the 2020 season.  Sanu’s production has declined each of the past two seasons including an underwhelming 2021 season where he only played in ten games and totaled 44.4 fantasy points.  He signed a single year contract worth $1,140,000.  Even with the cheap contract, don’t expect Owners to rush and pick him up.  He is owned in only 4.12% of leagues.

Sammy Watkins has signed with the Baltimore Ravens.  He will make $5 million for a single year.  It’s hard to believe that Sammy is only 27 years old.  In my mind, it feels like he has been in the NFL much longer than seven years.  Regardless, he has not lived up to his 4th overall pick draft capital.  The pinnacle of Watkins career was his sophomore season.  That season he had 60 rec – 1,047 rec yards – 9 TDs.  This was a very solid season, and Watkins’ career outlook seemed bright.  Well Sammy was unable to pass 52 receptions or 700 yards in any season after that.  I do think Watkins can be valuable in Baltimore, but it will probably be more of a “real team value” and not fantasy value.  I’ve been offered a trade for Watkins several times since this signing, and I have declined all offers.  I’m going to need to see his breakout first before I can invest in him.  It also doesn’t help that Baltimore ranked dead last in pass attempts and passing completions for 2020.  The volume is just not going to be reliable.

Willie Snead has been signed by Las Vegas.  The contract is 1 year – $1,127,500.  This is a fine value for a player like him.  I don’t think anyone expected him to receive a contract much more than this.  It will also be hard to see how Snead finds the field much in 2021.  He will start the season behind John Brown, Henry Ruggs and probably Bryan Edwards on the depth chart.

Let’s start with a few more Ravens players that have already signed contracts.  Gus Edwards was a restricted free agent coming into this offseason, and he has been given a second round designation as he was given a tender.  This means that he will continue to play for Baltimore, at least for one more season.  The numbers work out to be $3,384,000 for this year given that the designation was a second round.  Expect Edwards to continue to be a thorn in the side of J.K. Dobbins Owners.

Nick Boyle is a player that some people think shouldn’t be mentioned as he is not owned in a single Dynasty Owner league.  I’m including him for one reason, and it’s not because I’m expecting a breakout season from this 28 year old tight end.  I’m including him because Mark Andrews Owners need to know that Boyle is still a factor in Baltimore, and he will take targets away from Andrews.  I don’t anticipate he will take many receptions (14 in 2020, 31 in 2019), but as I mentioned earlier, the Ravens pass less than any other NFL team.  These targets are scarce and valuable.  Not to mention the fact that Boyle is getting high value targets (redzone, tenzone, etc.).  Boyle should not be owned with a yearly salary of $6.5 million, but this signing will hamper Mark Andrews, if only a little.

And now we have two former Ravens to talk about.  They are Robert Griffin III and Dez Bryant.  I don’t anticipate that either will re-sign with Baltimore.  If they were going to re-sign, I believe it would have happened by now.

Griffin has been relegated to a backup role over the past three seasons.  That will be the best case scenario for him in 2021.  I don’t even think that him being a backup is guaranteed as he remains unsigned.  RG3 will make between 1-3 million dollars when he is signed (similar to his 2020 salary).  The top possible landing spots for him have to be NYJ, ATL or DEN.  To be clear, I don’t think he could be the starter for any of these teams, but a backup position is likely.  Griffin can be dropped in all leagues if you need some cap room.

I doubt that Bryant will return to Baltimore as well.  The most likely landing spots would be TEN or PHI.  Both teams are in need of a wide receiver, although I’m not sure Dez fits the description of what they are looking for.  If Dez decides to play in 2021, he will make around 2 million dollars for a single year.

Well, that wraps up everything I wanted to talk about today.  Thank you for reading.  Please follow us on Twitter @Dynasty_Owner, and subscribe to Dynasty Owner on YouTube.  Next week I’ll be talking about the Bengals current and already signed free agents.  Take care and be safe.