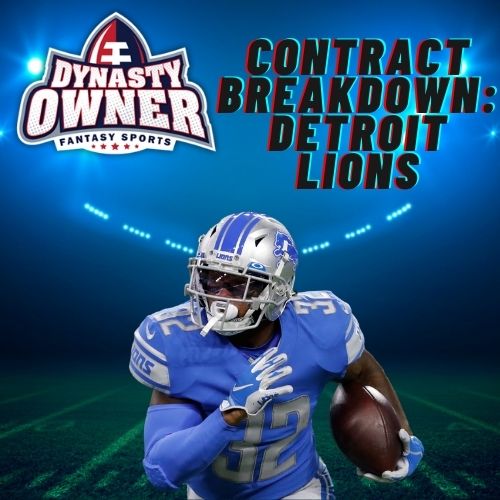 There are only six more teams that remain in my “Team Breakdown” series.  Two more teams from the NFC North and the entire NFC East is all that remains.  These next six articles should lead us right through the pre-season and almost all the way to the start of the 2021 NFL season.  After I finish these six weeks’ worth of breakdowns, I will most likely give a one week recap of some of the most important players we have discussed.  I’ll also include any pre-season news or game breakdown.

For now, here are some of the important Lions players that were free agents after the 2020 season.  They are…

Marvin Jones had a very healthy 2020 season for the Lions.  His season included 76 receptions, 978 receiving yards and 9 touchdowns.  Believe it or not, that was good enough to be WR18 in Dynasty Owner.  Jones found himself a new team in the offseason as Detroit failed to re-sign him.  He was added by the Jaguars to the tune of a 2 year – 12.5 million dollar contract (or $6.25 million per year).  Jones is 31, and he joins a somewhat crowded receiving team.  He will compete against D.J. Chark, Laviska Shenault, James Robinson and Travis Etienne for receptions.

Mohamed Sanu signed with the San Francisco 49ers at the end of March.  If you remember, he started the 2020 season with the 49ers but was cut in October.  He spent several weeks on the Lions practice squad before seeing game time towards the end of the season.  There isn’t a whole lot to talk about with Sanu.  Unlike Jones, Sanu has been a somewhat irrelevant fantasy wide receiver over the last two years.  In 2020, he managed less than 20 receptions and only a single touchdown.  I wouldn’t declare that Sanu’s fantasy career is over, but apparently even a 1.14 million dollar contract is too expensive for Dynasty Owners.  He is owned in less than 2.5% of leagues.

Kenny Golladay is clearly the big name on this list.  He signed a 4 year – $72 million contract with the NY Giants shortly after free agency opened up.  At $18 million per year, he is the sixth most expensive wide receiver to own.  ***Trivia Question:  Golladay is tied with two other wide receivers at exactly $18,000,000 per year.  Can you guess the other two receivers?***  I’m not going to talk about Golladay as this isn’t a Giants’ article.  Instead, let’s discuss what Golladay’s vacancy means to the rest of the Lions’ offense.  There is no doubt that the departure leaves a large void in the receiving core.  The top receivers on Detroit’s depth chart are Tyrell Williams ($4,000,000), Breshad Perriman ($2,500,000), Quintez Cephus ($899,822) and T.J. Hockenson ($4,955,306).  No one would call this a great receiving core, and most would call it well below average.  If there is a silver lining, it’s the fact that none of these receivers are terribly expensive.  Of these four, Hockenson should see the most work and should have the most productive fantasy season.  But as I said, feel free to take a chance on any of the other three.  Their cheap salaries and target projections make them speculative additions.

Finally, we have two players that have yet to sign a contract.  Both Danny Amendola and Adrian Peterson were not re-signed by the Lions.  It’s unlikely either will re-sign with Detroit this late into the off-season, but it’s not impossible.  Each player will retain their previous salary on Dynasty Owner until they sign a new contract.  This isn’t a big deal for Peterson owners as his previous contract was $1,050,000 per year.  He is still owned in 11.2 percent of leagues so there is clearly a decent number of people that want to wait and see where/if the former MVP lands.  (By the way, I agree with this strategy).  Amendola on the other hand is too much of a burden to hold onto.  He will cost $5,000,000 (as a placeholder) to keep him until he re-signs.  That is too much, and it just takes up valuable space on your roster.  Amendola is owned in less than 1 percent of Dynasty Owner leagues, and that is an appropriate number until his contract situation becomes clear.

That finishes the past and present free agents.  Today, I’m going to break down a single player.  His name is D’Andre Swift…

For this contract breakdown, I am going to use a stat that I used last season.  This stat appeared in my “Opportunity is (Almost) Everything” articles.  In those articles, I showed some player’s total opportunities (rushes + targets), opportunities per snap, and points per opportunity.  Points per opportunity (Points/Opp) is what I was to discuss with you today.  On November 11th last year, I wrote about how D’Andre Swift was leading all running backs, inside the Top 35, in Points/Opp.  This is an excerpt from that article..

“Who do you think leads the Top 35 running backs in points per opportunity (efficiency rating)?  That player is D’Andre Swift.  He is currently averaging 1.30 fantasy points per opportunity (rushes plus targets).  To put that in context, the number two player in efficiency is Alvin Kamara at 1.28 points/opportunity.  If Swift had the same number of opportunities as Kamara and stayed on the same efficiency pace, he would lead all running backs in fantasy points this year.  Obviously Swift has a small sample size as far as opportunities go, but he shouldn’t be penalized for that.  He has been one of the most efficient players in all of football this year, and it’s time he deserves some praise and hopefully some increased usage.  I was so shocked when I saw him at the top of the list that I simply wrote “SWIFT!!!” in my rough draft.  I will be upgrading him in my rankings, and I look forward to tracking his Points/Opp throughout the season and his career.  – TheJerk, Opportunity is (Almost) Everything, 11/11/20

Essentially, this was a way to further try and sum up a player’s raw value or efficiency.  This statistic takes into account the fact that some players may not see a lot of playing time for various reasons.  It simply shows how many points a player averages for a single opportunity.  Here is how the Top 20 running back point scorers fared in Points/Opp in the 2020 season…

D’Andre comes in at third in this efficiency ranking.  Here is another way I like to describe this statistic.  If every player on this list had the exact same opportunities throughout the year, and produced at the same rate they did in 2020, this list is how they would rank at the end of the season.  Swift was more efficient than Chubb, but he was slightly less efficient than Hines and Kamara.  What’s even more impressive is that all four of these running backs were on cheap salaries in the 2020 season.  I know what some of you are thinking…”Yeah, but it’s expected that as the volume increases, the production tends to decrease.”  I would largely agree with this statement.  Bodies get worn down throughout the year, and more volume means more chance for injury.  Even if injury doesn’t occur, people just get tired.  However, as you can see from the list above, no one in the Top 7 had 300 opportunities.  The only players that had more than 300 were Cook, Montgomery, Jacobs, Elliott and Henry (Henry actually had over 400 opportunities).

Back to my main point though…D’Andre Swift was one of the most efficient running backs in 2020.  This isn’t even taking into account his very cheap salary ($2,134,728).  I predict that Swift’s usage will increase by around 60 percent in the 2021 season.  I don’t expect his efficiency to stay the same (unless he’s the next coming of Alvin Kamara), but I do expect him to remain in the Top 10 running backs in terms of Points/Opp.

***The two other wide receivers that make exactly $18,000,000 per year are Tyreek Hill and Odell Beckham Jr.

Thank you for tuning in and reading.  Message me on Twitter (@dynastyjerk) and let me know if you have any questions or concerns.  I would appreciate it if you followed @Dynasty_Owner on Twitter as well as subscribed to Dynasty Owner on YouTube.  Thank you all.  Take care and be safe.