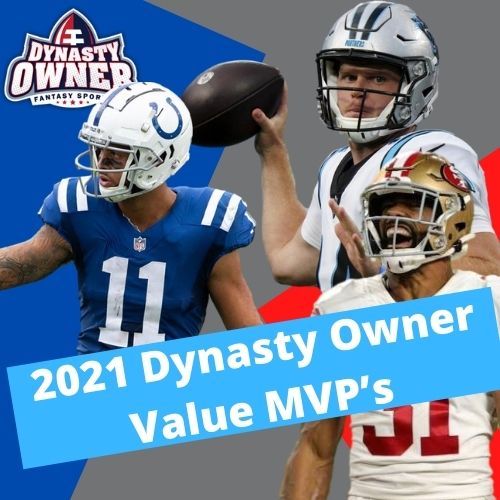 Hello Dynasty Owners and welcome to the first article of the new league season. If you are reading this on the day of release, we still haven’t witnessed a regular season game. That first game will happen tomorrow between the Dallas Cowboys and the Tampa Bay Buccaneers. Let me give you the article schedule that I will be following this season. I will be doing a weekly article on Wednesdays that will have a YouTube video paired with it. In addition, I will be doing a Thursday Night Football preview article. The Thursday article will most likely be a little shorter than my usual articles, and the purpose of them is to highlight the game itself and some of the values or “anti-values” that are to be had. In these, I will probably discuss one or two players that I think we need to watch out for as well as free agents that may become more talked about after the game. Without further ado, let’s talk about my 2021 Dynasty Owner (Value) MVP picks.

I’m going to talk about each major position individually and give my one player that I think will win people’s Dynasty Owner leagues this year, at least from a value standpoint. My picks are not solely based on total points scored. We know that almost nothing in Dynasty Owner runs on strictly fantasy points. Instead, I am factoring in salary and average draft position as well. For example:  I love Tyreek Hill this year. I own Hill in one of my Dynasty Owner leagues. I actually project that he will be the highest scoring wide receiver in 2021. However, with a salary of $18,000,000 per year and a current ADP of 26.1, he is not in consideration for a value league winner. Hill certainly can (and probably will) win people their Dynasty Owner leagues, but what I’m looking at is overall value picks.

In my search for a worthy quarterback candidate, I came upon a few names that sounded right…Lamar Jackson, Trey Lance, Jalen Hurts.  All three of these players are on great contracts and their ADP is not “too high” in my opinion, but I’m going deeper on this one.  It somewhat pains me to say this, but my Dynasty Owner QB MVP is Sam Darnold.  Now, before you tune me out, let me give some arguments to back my case.

As we all know, Darnold was drafted into the NFL by the Jets in 2018 as the third overall pick. What you may not have known is that he started his first NFL game as the youngest opening day starting quarterback in at least 41 years. It is also worth noting that Joe Burrow is actually six months older than Darnold. That’s right, Darnold is younger than second year quarterback Joe Burrow. Let’s add on…

Darnold was given zero favors by being drafted by the Jets, and being coached for two seasons by one of the worst player managers in the NFL, Adam Gase. This is anecdotal evidence, but we have seen many players that struggled with Gase go on to do great things under different head coaches and offensive coordinators. Ryan Tannehill is the biggest example.

Finally, Darnold joins the most athletic and talented offensive team that he has ever played with. He will have the best running back in the NFL and two 1,000 yard receivers from last season.  These players are, of course, Christian McCaffrey, Robby Anderson and D.J. Moore. I project Darnold to have a very productive bounce back season, and I would be happy to own him in Dynasty Owner.

Now, here is the best part, Darnold’s current salary is $7,561,929 for one more year, and his ADP is currently 114.8.  Both of these are great values.  Darnold is the textbook type of player that I want as my Bench quarterback this season.

Over the past month, I have written about Antonio Gibson quite a bit. The truth is that I considered him (and almost locked him in as my RB MVP), but I didn’t mainly because of his cost to acquire, and his ADP (12.1). As I did with the quarterback position, I looked deeper until I stumbled upon Raheem Mostert.

Mostert is perennially undervalued, and this year is no different. Mostert comes into the 2021 season as the lead running back, for the San Francisco 49ers, but he has rookie Trey Sermon nipping at his heels. There is little doubt in my mind that Sermon is the future back for San Francisco, but this year will largely belong to Mostert. The 49ers were in the top half of about every rushing metric in 2020 including rushing attempts, rushing yards, and yards per carry. In addition, Mostert is an explosive running back who has shown he does not need a large amount of volume to be an effective fantasy running back. I think they will use him all over the field and really look forward to watching this offense as a whole this season.

As was the case with Darnold, the best part about Mostert is his salary and cost to acquire. He is being paid $2,900,000 for one more year and his ADP is 85.0. While he may not get enough volume to literally win you weeks, the value you get by trading for him cheap or drafting him late is remarkable.

There are so many wide receivers I could have included here. A few that came to mind were Deebo Samuel, Courtland Sutton, and Russell Gage. In the end, I decided on Michael Pittman Jr. Pittman found only modest success at best in the 2020 season. I chalk this up to…

Now, I’m not going to declare that Carson Wentz will be better than Rivers was, but I can see that being a real possibility. All three of these facts have changed in 2021. He has a year of experience under his belt, and he looks ready to make the “sophomore wide receiver leap”.  T.Y. Hilton was recently diagnosed with a nasty sounding neck injury. Hilton will miss significant time, and his timeline isn’t yet known.

Pittman passed the eye test last year, and looked to be an above average route runner and physical presence when on the field. His salary is $2,153,212 for three more years. Pair this with the low ADP of 90.9, and I’d say you have an MVP value for 2021.

Adam Trautman would have been my clear Value TE MVP had it not been for his ankle injury late in the pre-season. I actually still have him as an honorable mention due to the idea that he will likely be back within the first three week.

Regardless, I’m going with Gerald Everett. Everett signed a single year contract with the Seattle Seahawks back in March. Simply put, I like Everett because he will be the primary receiving tight end for Seattle. His $6,000,000 salary is a tad higher than I would have liked for a value candidate, but his cost to acquire and current draft position make up for it. The reality is that you are going to have to pay a similar cost for many less productive tight ends that are majority rostered. A trade for Everett shouldn’t cost you much more than a late round pick, and his current ADP is 173.8.

Thank you for reading, and look out for my video that pairs with this article. I’ll be back tomorrow with my first Thursday Night Football preview article. Message me on Twitter (@dynastyjerk) and let me know if you have any questions or concerns. I would appreciate it if you followed @Dynasty_Owner on Twitter as well as subscribed to Dynasty Owner on YouTube.

Thank you all. Take care and be safe.