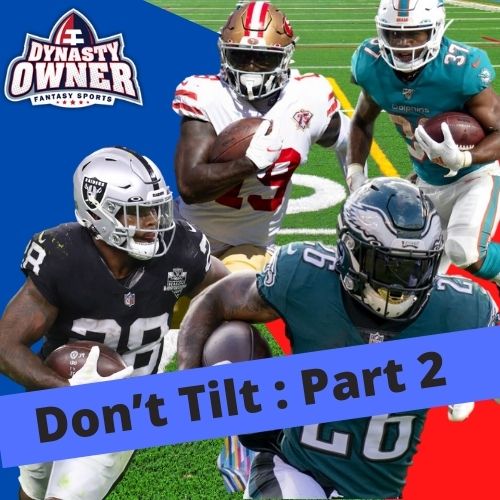 Week 2 has come and gone. With it, there are only seven teams remaining that are undefeated.  Today, I will be finishing up the second half of my “Don’t Tilt” article series. Last week, I brought you an explanation as to why you shouldn’t tilt about players on half of the NFL teams. The other 16 teams will be presented today. Obviously we have a little bigger sample size as I’m writing this after two weeks of action instead of one, but the point still remains. I would not overreact to performances after just two weeks. The only case that I would tend to “give up” on a player is if they are injured and projected to miss significant time. Let’s get into it…

The Raiders are one of the teams that are currently undefeated. They have beaten two quality opponents in the Ravens and Steelers. Josh Jacobs had a fantastic Week 1 fantasy finish with 17.0 Dynasty Owner fantasy points, but that took its toll on his body. He sat out Week 2 with a lower leg injury. I’m not an injury expert, but the expectation is that he will return to action sooner than later. I have little concern about Jacobs long term despite his injury and touchdown dependence.

Justin Herbert had his second consecutive game with less than 20.0 Dynasty Owner fantasy points. He’s actually had two very symmetrical games. Both games included: 31 completions, one touchdown, four rushes, at least one turnover, and passing yards within 1 yard of each other (Week 1: 337, Week 2: 338). Herbert hasn’t shown the big game potential this year yet, but those big games will come. Continue to be patient with one of the best quarterback values in Dynasty Owner ($6,644,688)

I have little concern for anyone on this Rams’ offense. They are 2-0 and offensively rolling through the competition. Would I like to see more production from Robert Woods? Probably, but you knew what you were getting when you drafted him. You got an extremely consistent wide receiver with a floor of 10 fantasy points, and little upside. This describes Woods, and this year is no exception. He has 12.4 and 12.0 Dynasty Owner fantasy points in the first two weeks.

Speaking of consistency, let’s talk about Myles Gaskin. We knew that if Gaskin could keep the lead running back job for the Dolphins all season that he would be an above average value ($651,694). While his rushing volume has certainly not been there (14 total rushes through Week 2), his receiving volume has been exactly what we expected (9 total receptions through Week 2). I have little concern about Gaskin as he will continue to be the primary receiving option out of the backfield. The one thing I would continue to monitor is Tua Tagovailoa’s injury as the entire offense as a whole will be hampered by any additional missed time.

While the Cardinals/Vikings Week 2 matchup was one of the most entertaining of the season so far, the ending was tough to see. The game ended with Greg Joseph missing a 37 yard field goal. Even with their 0-2 start, the Vikings have had a plethora of fantasy production.

Unfortunately, I think the Vikings will be playing comeback in most games this season which will help all four of these players. I have zero fantasy concerns.

Maybe the most disappointing Patriots player from a fantasy perspective is Jakobi Meyers. Not that he’s had a disastrous season, but it’s less than I expected. He is currently averaging five receptions a game (which is healthy), but his yards per game is only 41. Meyers ($588,333) came in as one of the only quality receiving options for the Patriots in my opinion, but his lack of production with the volume is cause for concern. Only 9 of Mac Jones’ 22 completions went to wide receivers in Week 2. Hopefully a more balanced passing approach will take over in New England.

I admit that I don’t use Twitter as much as I could or should, but when I was watching this week’s Saints/Panthers game I could only think of one thing to Tweet. I said, “Does this Saints’ performance say more about Rodgers, Darnold or Winston?”  And I honestly don’t know the answer. The Saints got blown out 26-7 by Carolina this week. Winston looked not great as he completed only half of his passes and had two interceptions. I would say that the Saints should see more success against the Patriots and Giants over the next two weeks, but I would have said the same thing about the Panthers this past week.

Speaking of the Giants, I am concerned for Kenny Golladay. I’m not considering dropping him because I am more patient than that, but 17.2 fantasy points through two weeks is greatly hurting any team that owns him. I would do the value math for you, but I’m trying to be as positive as I can in this article. Let’s just say that a player making $18,000,000 with less than nine Dynasty Owner fantasy points per game on average is an extreme negative value.

I’ll sum this Jets’ section up quickly. Zach Wilson is a rookie. Zach Wilson went up against a top tier defense and paid the price for it. Don’t make any extreme decisions about Wilson based on one bad game.

In the same way that Zach Wilson had a bad week against a good defense, Miles Sanders did the same. No fantasy owner wants to see their RB1 or RB2 matched up against a traditionally top rushing defense. While the 49ers may not statistically be a top rushing defense yet this year, it is a little deceiving because they gave up 82 rushing yards to Jalen Hurts. The truth is that the 49ers are limiting opposing running backs to below average games. Sanders was no exception.  Expect much more than his Week 2 fantasy performance (6.9 Dynasty Owner fantasy points) in the next two weeks as he plays Dallas and Kansas City.

I don’t think I would ever be able to trust Ben Roethlisberger as my starting quarterback in Dynasty Owner, but he is a perfect candidate for a Bench quarterback. Does anyone remember my conditions for a Bench quarterback? It is a player who has a cheap salary ($14,000,000) with middle of the road production (15.8 Dynasty Owner fantasy points per game). Big Ben fits that description, and I would love to have him on my Bench for the whole season.

***This is a quick reminder that (here at Dynasty Owner) players you put on your Bench will add 25 percent of their fantasy points to your overall total.***

I loved Deebo Samuel coming into the 2021 season. I thought he was undervalued and under drafted in most leagues. It seems like his production so far would be enough for me to take a victory lap. The truth is that we have to wait and see how the rest of the season shapes out.  Yes, 23.5 Dynasty Owner fantasy points per game is a blistering pace, but I don’t think that number is sustainable given the 49ers commitment to the run game and the total number of weapons in San Fran. I like Deebo to finish as a Top 20 wide receiver overall in 2021, but I don’t expect him to be Top 10.

Tyler Lockett (57.8) has more than doubled D.K. Metcalf’s (27.3) Dynasty Owner fantasy points this season. The truth is that this is just a small sample size. There will be games like the first two where Lockett has more receptions and receiving yards, but the same will be true for Metcalf. Don’t get discouraged. Continue to hold Metcalf proudly. Maybe send out a trade offer for him as well if you think his Dynasty Owner is panicking.

The Buccaneers cruised to a second win on the season thanks to Tom Brady’s five touchdown passes. If there was any concern about Mike Evans last week, surely that was washed away with his Week 2 performance. Instead, Antonio Brown was left out this week. He had only one reception for 17 yards. Continue to play him as a Bench wide receiver for the time being.

As I watched this game, I was preparing myself to write about Derrick Henry. He was on his way to a very disappointing fantasy week at halftime. In fact, through two games this year, he only has 43 rushing yards on 22 attempts in the first halves. In the second halves, he has 25 rushes for 176 yards and 3 touchdowns. Henry has done this for much of his career. He gets better as the game progresses and as the defenses get tired.

Now we come to one of the hardest pills for me to swallow in this young season. Antonio Gibson has had a bad start.  He has less than 10.0 Dynasty Owner fantasy points in each of his first two games. I am not panicking, and neither should you. The one statistic that gives me a little anxiety is the fact that Gibson only had only two receptions in Week 2 while J.D. McKissic had five  I think I’m going to have to temper my reception expectations for Gibson for the time being, but my overall outlook has not changed.

Well, that’s it. That’s all I have today. As always, thank you for reading and continuing to support Dynasty Owner. Message me on Twitter (@dynastyjerk) and let me know if you have any questions or concerns. I would appreciate it if you followed @Dynasty_Owner on Twitter as well as subscribed to Dynasty Owner on YouTube.  Take care everyone and be safe.