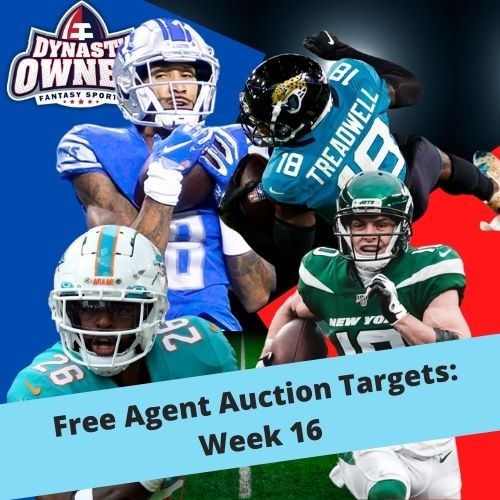 What’s up fellow Dynasty Owners? I hope all your playoff matchups went better than mine as I will not be winning a League Championship this year despite having two absolutely loaded rosters. I am not going to waste anytime this week, let’s get right into Jay’s weekly recap.

Week 15 in the NFL was extremely crazy, and it was headlined by the Detroit Lions beating the Arizona Cardinals and opening the NFC West back up for grabs. The Browns almost pulled one out without their top two quarterbacks and my main takeaway from the game is Baker Mayfield should be doing so much more with this roster around him. The Chiefs and the Chargers battled it out in an epic overtime thriller with the Chiefs coming out on top and sweeping the Chargers, which gives them a crucial head-to-head tiebreaker if needed. The Colts stunned the surging Patriots, and, in my opinion, Jonathan Taylor should be the front runner for MVP right now. The Bills took advantage of the Patriots loss beating the Panthers and now have a chance at redemption against the Patriots this week. The Ravens may have found a long-term backup in Tyler Huntley who almost led the Ravens to victory over the Number 1 seed in the NFC, the Green Bay Packers. The Saints seem to be some type of kryptonite to Tom Brady as they pulled out another improbable victory against the 44-year-old G.O.A.T. The last game I have on the list is none other than my Steelers keeping their playoff dreams alive beating the Tennessee Titans on Sunday. Good luck this week everyone! Now on to the free agents!

I know last week I said I wouldn’t put Josh Reynolds back on this list but the disrespect towards this man is real and it must be fixed. Against a stingy Cardinals defense in Week 15, Josh Reynolds had an excellent game for a Lions player finishing with 6 catches, 68 yards, and a touchdown (18.8 Dynasty Owner fantasy points). Reynolds has clearly been Jared Goff’s favorite target since arriving in Detroit and I see no reason that changes the rest of the way.

Another repeat on the list from last week, Laquon Treadwell. Treadwell has quietly put together a few solid performances finishing with more than 10.0 Dynasty Owner fantasy points in each of his last three games. I would not recommend anything more than a Bench spot if you’re playing Treadwell as you are more likely to hit the lottery than see a Jaguars player not named James Robinson score a touchdown.

If I am being completely honest, I feel about as confident in this pick as when I did put Craig Reynolds on the list last week. It just seems like a flat-out fluke. All of that said, Johnson did have his 1st career 100-yard rushing performance on Sunday and earned a lot more playing time moving forward. I would tread carefully with Johnson as the Dolphins have a tough matchup this week against the Saints and Myles Gaskin is still going to be in the mix.

In the 4th spot we have Dan Arnold 2.0, James O’Shaughnessy. Since taking over for Arnold, O’Shaughnessy has filled in nicely and continues to put up relatively similar numbers. In Week 15 O’Shaughnessy had his best game yet with a 4 catch, 60-yard day totaling 10.0 Dynasty Owner fantasy points. O’Shaughnessy has another friendly matchup against the Jets this week and can be a viable Bench play at the tight end spot for at least Week 16.

As I mentioned earlier I was extremely skeptical about putting Craig Reynolds on last week’s list. There were two real reasons for this, the first being I expected D’Andre Swift back by now, and the last being I just wasn’t sure he would be able to do it again. In Week 15, Reynolds proved me to be wrong as he compiled 26 carries for 112 yards. If the Lions keep Swift sidelined for the remainder of the year, which I hear is a real possibility, Reynolds could step in and help you win a matchup or two in the playoffs. A half of a league winner if you will!

In the #6 spot we have yet another repeat player who put up decent number of Dynasty Owner fantasy points in Week 15, Braxton Berrios. Berrios did not have the type of targets we are used to seeing but nonetheless, he was able to find the end zone and salvage his day. In fact, Berrios only managed to bring in only one catch, but it was for 26 yards, and he added 2 carries for 5 rushing yards and a rushing touchdown. In Week 15, Berrios finished with 11.2 Dynasty Owner fantasy points which is prime Bench player material. If Berrios gets back to a massive target share in Week 16, he could be an underdog that puts you over the top, though I wouldn’t count on it with the way the Jets’ offense looks.

Ameer Abdullah is someone I strongly considered putting on the list last week, but I ultimately went with Royce Freeman instead. I am sorry. As I am sure most of you know, Freeman was a bust with Rex Burkhead playing against the Jaguars. Abdullah did not disappoint any Dynasty Owners who did play him finishing with a measly 4 carries for 7 yards, but he added 4 catches for 48 yards and a touchdown through the air, good enough for 17.3 Dynasty Owner fantasy points. If Abdullah continues to get meaningful receptions out of the backfield, he is someone who can squeeze into a Bench spot in a good matchup.

Rex Burkhead has been an absolute opportunity machine during the back half of the season when healthy. In Week 15, Burkhead got another 17 touches but was unable to do much with them. I know Burkhead is not a pretty option at all but if you are desperate, he is seeing enough touches to produce at some point. Burkhead also received three targets in the air which is another positive trending in the right direction for the former Patriot.

In the last spot on the biggest free agent list ever, we have none other than Buccaneers receiver, Scotty Miller. Miller has not done much this season but as we all know injuries are a massive part of Dynasty Owner, which have cleared a path for Miller to make an impact on your roster. Chris Godwin is out for the season with a torn ACL, while Mike Evans is banged up with a hamstring injury and may not play in Week 16. If this scenario happens, I expect Miller to be a favorite for Tom Brady as he seems to have a good amount of trust throwing to Miller. The only player I see out touching Miller if Evans does not play is Antonio Brown.

Thank you for reading and as always good luck on your 2021 Chase for the Ring!