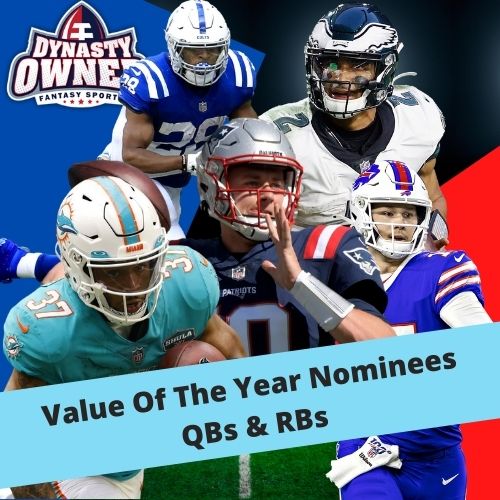 This is it. The week that everyone has been waiting for has finally arrived. We are officially in the Dynasty Owner playoffs. The goal for almost everyone in fantasy football is to win their league championship. That seems like an obvious thing to say, but that championship cannot be won without first making the playoffs.

When I start each fantasy season, I give myself one goal and one goal only…make the playoffs. So often, people get caught up trying to win their championship from day one, but this season (like all others) is a marathon, not a sprint. Fantasy football should be taken one week at a time where each win is a championship in itself. So, I say it again…make the playoffs and then worry about the playoffs once you’re there. I’ve seen way too many teams win the championship after they barely snuck into the final playoff spot. Likewise, I’ve seen some of the best fantasy teams ever assembled get bounced in the first round of the playoffs.

Fantasy football (especially dynasty playoff football) is fluky. If you’ve made the playoffs, you have done better than half of the teams in Dynasty Owner. You should be proud of yourself, but now isn’t the time for awards. Now it’s time to win. Here is the single best piece of info I can give you when it comes to the playoffs…

For example: I will most likely be sitting DK Metcalf in favor of Diontae Johnson for my FLEX spot in one of my Dynasty Owner leagues. This is probably an unthinkable thought at the beginning of the season, but it is a reality now.

Set your lineup, be confident in it, and realize that if you lose you we’re just outplayed. There is no need for panic and anxiety. Let it play out, and be that much happier when/if you are the victor.

Value of the Year Nominees

In order to be eligible for the VOTY, each player will have to be around the Top 20 or better for their position. In addition, they will have to be in the Top 10 in terms of value (DD/FP). Okay, let’s do it…

Let’s start with my frontrunner for quarterback Value of the Year. Hurts is my odds-on favorite for a few simple reasons.

First, Hurts has the cheapest salary of any other quarterback on this list. A salary of $1,506,292 is cheap for any player in Dynasty Owner, let alone a quarterback. It’s also worth mentioning that, including this year, he has three years left on his rookie contract. If we were doing a long-term value awards list, Hurts would no doubt be near the top of that list also.

Second, Hurts is technically the most valuable quarterback by Dynasty Owner standings. He leads all quarterbacks in DD/FP with $5,144. This means that Hurts achieves 1 fantasy point for every $5,144 of his salary. This is fantastic value and one that no other quarterback this season has come close to.

Third, he is the QB10 at the time I’m writing this article. So, we have a Top 10 quarterback with a Top 10 salary combined with the best DD/FP of any quarterback. Does it get better than that?  Apart from Week 12, Hurts has been one of the most consistent quarterbacks in all of fantasy.

Lamar currently ranks in a tie with Dak Prescott as the QB9 on the aging season. Not necessarily great, but also not as terrible as it sounds either. Much of the negative he experienced this year has come in the past four weeks. He missed a game in Week 11. He had a poor 9.0 Dynasty Owner fantasy point performance against the Bears in Week 12. He put up a pedestrian 20.1 Dynasty Owner fantasy point against the Steelers, and then attempted only 4 passes in Week 14 before leaving with a sprained ankle.

All this being said, the first part of Lamar’s season cannot be forgotten. In all, he has 299.4 Dynasty Owner fantasy point. His salary of $2,367,912 made him almost a guarantee to appear on this list. But don’t expect to see him here next year. Dynasty Owners will have to find a way to swallow his increased salary.

Heinicke making this list may surprise some of you. His mediocre success combined with a very cheap quarterback salary makes him a fringe candidate for Value of the Year. Not really much more to talk about with him though. Barring a historic end to his 2021 season, there is a very small chance he’ll win the award.

Regardless, a $2,375,000 salaried quarterback that projects to score north of 300 Dynasty Owner fantasy points in a season has to be recognized.

Josh Allen…What can I say about him that he hasn’t already showed you on the field? At this point in the season, there are only two quarterbacks that have scored more fantasy points that Allen. They are Tom Brady and Justin Herbert. I’ll get to Herbert in a bit. For now, remember back to what I said about Josh Allen in the preseason…

I talked about how Allen was going to be one of, if not, the most valuable player on Dynasty Owner for 2021.  It remains to be seen if Allen will be the ultimate quarterback value, but there is little doubt in my mind that he will win many Dynasty Owners their leagues. A QB3 who costs less than 6 million dollars a year is a one way to ticket to a championship. As is the case with Lamar though, beware of his contract increase in 2022.

I don’t want to do a full breakdown on Mac Jones. Rather, I just wanted to mention him. He is the sixth most valuable quarterback that fits my specifications for this article. He will not win the Value of the Year, but I wanted to include him as an Honorable Mention.

Herbert is also unlikely to win the Value of the Year award as his salary is just too high. A $6,644,688 contract for a quarterback is elite, but there is no way to make up the value to a player like Hurts or Jackson. Like Allen, Herbert will many people their Dynasty Owner league championships as he did last year in his rookie season. What I’m most excited for is the fact that we will get to see this type of production for two more seasons on a rookie salary.

He was one of my favorite values coming into the 2021 season, and he has delivered on value.  I’m usually writing about players who overperformed their projected value because of exceptional fantasy output.  Gaskin seems to be the opposite of that idea. Gaskin has led the running back values virtually all season despite only being RB19 on the season in terms of fantasy points. He has had a roller coaster type season which has left several Dynasty Owners disappointed in his overall touches (especially receptions).

I’m here to remind you of how good a value Gaskin is and will continue to be.  He has just about the cheapest possible salary for a starting running back in the NFL…$651,694.  Pair this with 158.0 Dynasty Owner fantasy points and you have a DD/FP of $4,125.

Robinson makes this list looking to repeat as the Value of the Year. What Robinson did in 2020 was not only unexpected, but it was also unprecedented. He set many single season records for a rookie undrafted free agent. He hasn’t had quite as much volume or efficiency when compared to last season, but with a salary of $763,333, there was room for regression and also continued value dominance.  Don’t let his last two abysmal weeks (1.5 & 0.4 Dynasty Owner fantasy points) distract you from the fact that he has a been an amazing value all season.

And now we come to the elephant in the room. How could I make an ultimate value list without including the most dominant running back in all of fantasy football? Jonathan Taylor has been absolutely unbelievable this season.

I know that hyperbole can run wild in fantasy analysis, but I don’t take this statement lightly. He is having one of the greatest fantasy running back seasons that I’ve ever witnessed, and I’m thankful that I’ve been able to see it.

But while I was writing this, I asked myself the opposite question of what I proposed to you above…

With his salary, how could I include him in the ultimate value list? Let me explain.

Taylor has (by far) the most expensive salary of any of the three running backs on this list. His salary is triple Gaskins’ and more than double Robinson’s.  This is where the subjective nature of my article is going to come into play. Yes, technically there is no other running back that come close to Gaskin or Robinson in terms of DD/FP.  However, I’m going to look bigger picture when deciding on a winner for VOTY.  I’ll explain that more when we get to the final article of the season. For now, this is where I leave you.

Thank you for reading. Next week I will present the contenders for wide receiver and tight end Value of the Year. Message me on Twitter (@dynastyjerk) and let me know if you have any questions or concerns. I would appreciate it if you followed @Dynasty_Owner on Twitter as well as subscribed to Dynasty Owner on YouTube. Take care everyone and be safe.