Six Players Rebuilding Owners Should Trade for this Off-season 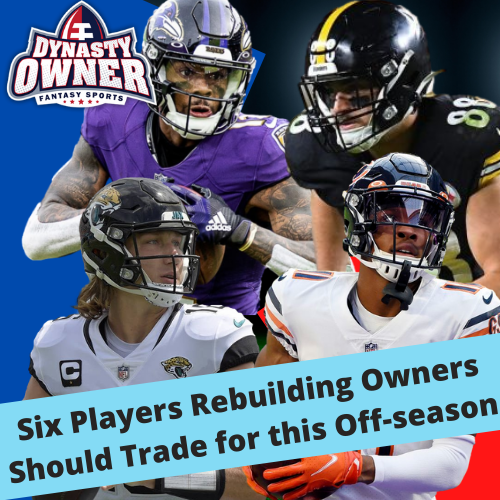 Six Players Rebuilding Owners Should Trade for this Off-season

Dynasty Owners! Welcome back to another weekly rebuild article. Before I jump into the normal stuff, I would like to reveal what I will be covering over the next few weeks. In next week’s article, I am going to be digging into one of Steve Van Tassell’s (@SteveVT33) teams that needs an old fashioned rebuild. I am not sure if this will be a one- or two-part series just yet and will really depend on what the team looks like and how many moves can be made. I feel this will be a fun way we can all help Steve during his rebuild as I will be asking for help from all of you on trades, cuts, and free agent pickups via Twitter. Once I get Steve’s rebuild finished up, I will be doing an article on the Dynasty Owner store as well as purchasing an orphan team to start rebuilding. When selecting the orphan team, I will cover different things about what you all should look for when purchasing an orphan team or a team from the Dynasty Owner store. The following week, I will discuss the strategy I will be using during the rebuild of my new orphan team. In today’s article, I will be covering six players who I feel rebuilding owners should target this off-season and no you won’t be seeing Ja’Marr Chase’s name on this list. He is just too expensive to acquire. The main thing I am looking for in all these players is that I do not have to give up many assets to get them and I want them to still have potential to be a staple on my roster soon. If you enjoyed last week’s video, please let me know on Twitter. Also, let me know if you would like another article of players that need to be traded in a rebuild.

As always, before we jump into these six players, let’s cover the amazing weekend of football we all just witnessed. All four divisional round games were decided in the final seconds of regulation or in overtime and it was unbelievable to watch and something we may never see again. Up first, we have the Bengals vs the Titans and while I chose the Titans to win, I did mention Henry would be the x-factor and needed to play well. Unfortunately for the Titans that did not happen, because of that Joe Cool and the Bengals are in the AFC Championship game. Up next, we have the Rams vs Buccaneers, and this was one of the most frustrating games I have ever watched as a football fan. Is it just me or does it seem like Tom Brady has always gotten the most ridiculously timed breaks throughout his career? I mean it seems like even in a loss like Sunday for Brady, the Football Gods are gracious. In the other NFC matchup, we had Evan Eckert’s dream become reality when Aaron Rodgers choked out of the playoffs once again. Personally, I am a fan of Rodgers but only 10 points at home is on the quarterback in today’s NFL. In what may very well be the game of the decade, we had the Chiefs narrowly squeak by the Bills in an overtime game. A game that featured 25 points in the last two minutes of regulation only to end in a tie game. Unfortunately for the Bills, the Chiefs won the coin toss and essentially won the game getting the ball first and forcing Josh Allen to watch helplessly from the sideline.

Enough about the past, let’s jump into the future with a quick preview of both championship games this weekend. The NFC matchup features two NFC West teams, the San Francisco 49ers vs the Los Angeles Rams. I have the Rams winning the matchup, but I am not all that confident in my pick with the 49ers winning their previous six games against the Rams. The playoffs are a much different story, and I can’t wait to see how it plays out. On the AFC side, we have the Cincinnati Bengals vs the reigning AFC champion Kansas City Chiefs in what should be another fantastic game. I bet against the Bengals last week and I clearly did not learn my lesson as I will do the same this week. The Chiefs’ experience will be a bit too much to handle for the Bengals on the road leaving us with a Super Bowl matchup of Rams vs Chiefs and a second straight team earning a home game in the Super Bowl.

Now that we have the Super Bowl matchup decided let’s move on to the article.

I really considered putting Trey Lance on this list but after the season Trevor Lawrence had in 2021, I feel he may be the easier asset to acquire. If the Jaguars hit on a coach, Lawrence’s development could move quickly in the right direction, but I am not sure many Dynasty Owners have much faith in that happening with the franchise he plays for. When rebuilding you should already have multiple picks from other members in your league and I would attempt to use those to acquire anyone on this list. The quarterback position is tough to play in the NFL and while some have taken off instantly, it’s perfectly reasonable to see a young player struggle, especially in the middle of so much dysfunction like Lawrence was. If Lawrence can turn it around, you will have a cheap franchise signal caller on a rookie deal for the next 3 years without mortgaging the future a ton. Let’s not forget Lawrence was potentially the best prospect to ever enter the NFL draft according to many scouts.

I know many people are worried about Lamar Jackson and his ability to throw the ball, but I feel he does it well enough to produce two solid fantasy assets with Bateman being one of them moving forward. When Bateman played in 2021, he showed real promise and the ability to play the X position. If Bateman can stay healthy and continue his upward trajectory you will have yourself a solid Number 1 receiver on his rookie deal for years to come. The best part is he won’t cost you a ton of draft capital to acquire in a trade. I am not sure why, but Bateman doesn’t get anywhere near the respect he should after showing promise in 2021. For me, the name of the game when rebuilding is to grab as many young guys with solid potential as possible allowing me to be picky when it comes time to renew contracts. When rebuilding you can never go wrong by finding great fantasy role players for cheap and pairing them with the big-time studs your high picks produce.

I initially did not have Darnell Mooney on this list, but I don’t think his value has risen enough that he is untouchable for rebuilding owners. While Fields has shown he loves throwing Mooney’s way, there will likely be two buying windows and it really comes down to which you prefer. Now the Bears are in the middle of a coaching search and a good, or bad hire, has the potential to swing Mooney’s value a little bit, but the real gamble is waiting to see if the Bears draft a receiver early. If they do, Mooney will see his value decrease but if they pass on the position, Mooney’s value could skyrocket big time. In my opinion, if I am trading for Mooney, I am doing it after the draft as I see the Bears taking a receiver in the first two rounds to help with the development of Justin Fields. Optics mean a lot when it comes to trading in Dynasty Owner.

I personally stay away from running backs early on in rebuilds but with Robinson if you are already a year or two into your rebuild, he makes a ton of sense. Robinson has shown he is a talented player who can handle a lead back role in the NFL. Unfortunately for Robinson he suffered a torn Achilles at the end of 2021 and will be sidelined roughly 9-12 months. Now that Robinson is cheaper than he ever has been to acquire, the time is now to get a deal done. If Robinson can bounce back, in a year from now you will have a solid running back to either trade or help contribute to your rebuild that should have an end in sight. In a perfect world, Robinson comes back midway through next season, plays well and signs as the main guy outside of Jacksonville.

At Number 5, we have the future Steelers great Pat Freiermuth. I wanted to make sure I included all four of the major positions in Dynasty Owner and I couldn’t find a young tight end I wanted to trade for more than Freiermuth. I know some will argue Pitts here, but I feel he will cost too much to get in a trade for most rebuilding owners to afford (we all know you can afford Pitts and Chase with your draft capital Bryce). Heading into 2022, the Steelers have a major question mark at the quarterback position making it a great time to trade for their young tight end. I generally like to start my rebuilds by acquiring a solid young tight end and Freiermuth fits the bill. Always remember, it’s ok to walk away from a trade if an owner wants too much in return.

Brandon Aiyuk is probably the most interesting player on this list simply because we know what this kid can do for stretches on an NFL field, like when he had six games with 17.5 or more Dynasty Owner fantasy points in 2020 over an eight-game stretch, while missing two games to injury during that time. I am not sure Aiyuk passes Samuel on the depth chart like many thought would happen heading into 2021, but I do see him being a huge piece of this offense once Lance takes over. I feel at this point Aiyuk can be had for a second round pick plus a Bench player and he will likely be a solid WR2 on your roster for many years to come. Another thing to look at is if the streaky play continues his second contract will not come with a big price tag but he will likely still have that boom or bust potential.

Thank you all for reading and be sure to check out Matt, Steve, and Nate’s articles and videos as well. Stay safe out there and good luck on your 2022 Chase for the Ring!