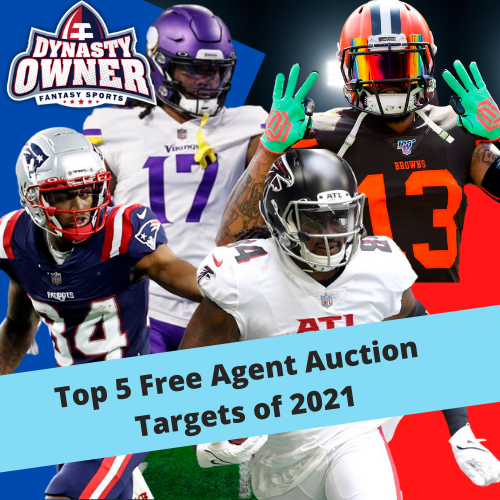 Well folks, as sad as it is to think that the Dynasty Owner season has ended, it hasn’t! Here at Dynasty Owner, we roll all year long. Buckle up for a fun off-season to all the Dynasty Owner rookies out there. Before we jump into today’s article, I would like to shout out Jeff, owner of team SKOL Vikings, who won the best prize in all of fantasy sports, The Chase for the Ring! Jeff will receive a very nice custom Dynasty Owner Super Bowl style ring, a fantastic dinner, and an all-paid trip to the Hall of Fame for taking first place for the entire Dynasty Owner platform. I would also like to congratulate all our other Dynasty Owner champions for the 2021 season. Enjoy them, they do not last long in this world! If you have an awesome championship war story, good or bad, feel free to let me know on the Twitter machine. As much fun as the fantasy football season is I think this is probably my favorite time of year when we get to take a breath, evaluate rosters, and start looking at the new faces coming into the NFL next season.

In today’s article, we will cover part of the evaluation process and will look at the top Free Agent Auction pick-ups for the 2021 season. I must admit when I was asked to do this, I got excited because I feel it is a great way to show users how deep Dynasty Owner rosters really are as well as how savvy the players on this platform are in terms of already rostering the right players. Remember back in Week 1 when everyone was scrambling to pick up Elijah Mitchell? Here on the Dynasty Owner platform, he was well over 95% rostered at that point. In the 2021 season there was not a whole of season long help, though one player stands out above all else in that category and we’ll get to him shortly. We also failed to see much in terms of future talent or players who will be on your roster producing for multiple years but as I mentioned in the previous category, it was not a complete bust. Dynasty Owners are fantasy football savvy.

A few quick reminders before we jump into our top 2021 free agent pick-ups. First and foremost, thank you all for participating in the 2021 Dynasty Owner season! The off-season will be coming quickly as Dynasty Owner never really sleeps. Early March will be an especially critical time for Dynasty Owners as it will be time for many important contract decisions. Please stay tuned to the announcements, YouTube channel, and Twitter to stay up to date on all new Dynasty Owner news. Enough of the talk, let’s hand out some awards to the Top 5 Free Agent Auction pick-ups.

The Number 1 free agent pick-up on the Dynasty Owner platform was none other than Cordarrelle Patterson. Patterson had a fantastic 2021 season, good enough to finish as the RB7 in all of Dynasty Owner. In the year of 2021 adding this kind of production at the RB position was a massive boost with all the injuries and battles with Covid the players had to deal with. In 2021, Patterson scored over 12.5 Dynasty Owner fantasy points ten times and was able to hit over the 17.0 point mark a whopping seven times. Just fantastic production for a free agent pick-up that cost next to nothing. In total, Patterson finished with 607 rushing yards, 51 catches, 547 receiving yards, 434 return yards and 11 total touchdowns good enough for 243.3 Dynasty Owner fantasy points.

One of my favorite players in all the New England area, Kendrick Bourne slots into the Number 2 spot of the Dynasty Owner free agents of the year. I understand Bourne is a tad bit pricey for most people’s liking, but he is tied to an ascending young quarterback for two more years which should only boost his value moving forward. In 2021, Bourne is currently the WR32, catching 52 balls for 776 yards and 5 touchdowns good enough for 175.5 Dynasty Owner fantasy points. Another huge positive for Bourne was the fact he added over 100 yards rushing and a passing touchdown in 2021 meaning the Patriots coaching staff trusts him. If Bourne continues to grow in the Patriots offense alongside Mac Jones, he could very well be a bargain come 2022.

At Number 3 for the 2021 Free Agent Auction targets of the year, we have the Minnesota Vikings second year wideout K.J. Osborn. Osborn was a fantastic pick-up for those who got him and has what seems to be a bright future with a rapidly aging Adam Thielen being the only player in his way from starting opposite of Justin Jefferson fulltime. In 2021, despite the presence of stars like Jefferson, Thielen, and Dalvin Cook, Osborn still managed to post seven games where he scored double-digit Dynasty Owner fantasy points. On the year, Osborn has a total of 49 catches, 634 yards, and 6 TDs (153.0 Dynasty Owner fantasy points). Anytime you can get a promising young player on your roster for just Dynasty Dollars is what I like to call a win.

The Odell Beckham Jr. (OBJ) drama never really ends does it? In all fairness to OBJ, this is a good list to be on unlike the lists he had been appearing on for the Cleveland Browns. Initially Beckham had an $18,000,000 salary with three years remaining, but after being cut by the Browns he signed with the Rams for what he is currently at. A huge discount! During his time thus far with the Rams, Beckham has had a knack for the end zone scoring 5 touchdowns after failing to score in Cleveland. Beckham has also added 25 catches and 287 yards to add to his newfound end zone success. Beckham’s star potential paired with the fact he will likely end up in a good spot come 2022 at a discount for another year makes him our Number 4 free agent pick-up in 2021.

It’s safe to say that our Number 5 guy on this list is questionable to say the least. There were spots that Beasley made a difference if you ended up needing to play him, especially earlier in the season when it seemed he was scoring 15-20 Dynasty Owner fantasy points every other week. I also feel Beasley will have one more year of good football left after 2021 while playing alongside Josh Allen and that bolsters his case to be on this Top 5 list. In 2021, Beasley unfortunately had a run in with Covid which really put a damper on the last few weeks of his fantasy numbers. Over the first 14 weeks of the 2021 season, Beasley managed to score double digit Dynasty Owner fantasy points in almost half of his games, and scored 14.0 or more Dynasty Owner fantasy points in five of those weeks. On the 2021 season, Beasley currently has a stat line of 78 catches, 662 yards, and 1 touchdown good enough to be the WR38 in Dynasty Owner. If Beasley’s end zone luck weren’t so bad this season, he would have finished much higher overall this season but sometimes that’s the way the cookie crumbles.

I hope you all enjoyed this article and were able to roster at least three of these five players all season long, winning you a Dynasty Owner championship. Please do not forget about the weekly off-season articles and videos by Steve Van Tassell and Matt “The Jerk” Morrison. Don’t forget to check out Dynasty Owner on YouTube!

Thank you for reading and as always good luck on your 2022 Chase for the Ring!