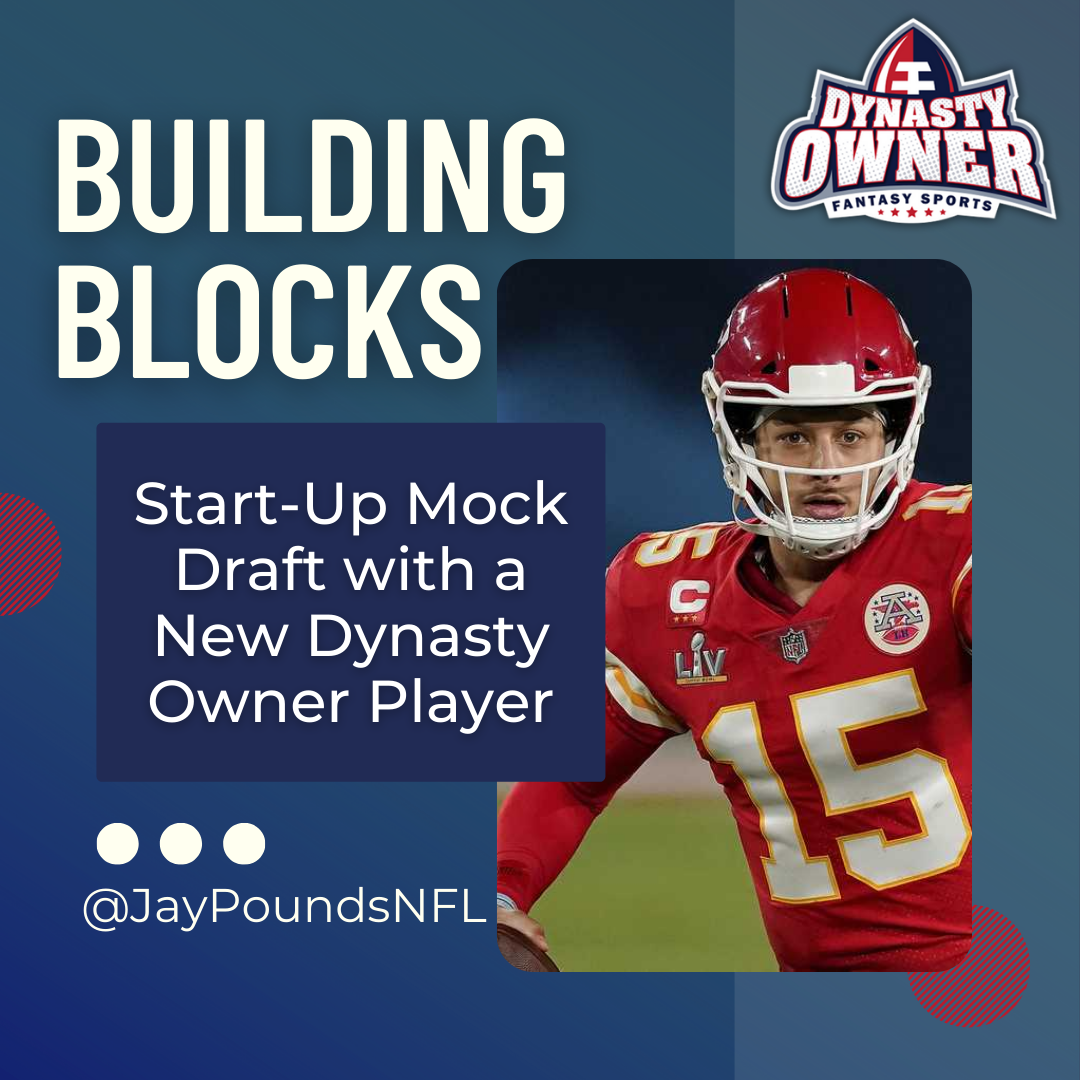 Dynasty Owners welcome back to another week with yours truly! I don’t know if you feel the same, but this offseason has been flying by for me. The draft has come and gone and before we know it our rookie drafts will be upon us.

I would like to take a moment to encourage everyone to participate in a couple of rookie mock drafts so we can see the ADP start to change. In case you are wondering what I just said here on Dynasty Owner our users set the incoming rookie ADP by using our rookie mock draft feature. In today’s article, I will be highlighting a few of those rookies and where they were drafted in our recent 12-person start-up mock draft.

Back on May 1st Steve and I held a mock draft that included 9 experienced Dynasty Owner users as well as one brand new user, who happens to be my dad. My dad has been playing fantasy football for 20-plus years, so he is no newbie but the salaries and building a team underneath a hard cap was all new territory for my old man.

In this article, I will be breaking down several aspects of my dad’s first-ever Dynasty Owner draft in hopes to help some of you new users that are just getting started here on the platform. The things we will cover today will be a breakdown of each position on my dad’s roster, my thoughts on how his draft went, and a brief Q&A about my dad’s thoughts on his first-ever Dynasty Owner draft, oh and in case you were wondering he drafted from the 1.01. If you have any questions, comments, or concerns, feel free to contact me via Twitter @JayPoundsNFL

As the draft was unfolding Steve and I were shocked at the low spending of my dad in his first-ever draft, and then the 10th round hit. In the 10th my dad went big when selecting his franchise quarterback, Patrick Mahomes. I must say I was fairly impressed with his strategy as Mahomes should be a value here in a few years.

The rest of my dad’s quarterback room left a little to be desired with his second quarterback being rookie Desmond Ridder, though I could be eating my words if he ends up starting at some point this season for the Atlanta Falcons. The rest of the quarterback room is completely developmental with the best prospect being Carson Strong of the Philadelphia Eagles. The last two players on this list, J.T. Barrett, and Wilton Speight were drafted purely for salary reasons.

Overall Grade – B I like the thought process on this position, but a lot is riding on Desmond Ridder especially if Mahomes were to miss significant time.

I must say my dad nailed his running back selections. Sitting at the 1.01 made his first choice an easy one with Jonathon Taylor. Taylor is an absolute stud and at a salary under $2,000,000 he is one of the best values in all of Dynasty Owner. With the 2.12 selection of the mock draft another awesome value was available with my dad drafting incoming rookie Breece Hall. If Hall hits like many are expecting Taylor and Hall gives my dad an excellent 1-2 punch at running back.

The depth running back for this roster is David Montgomery and getting him at the 4.12 was excellent work. Montgomery has quietly been a stud when on the field the past couple of seasons. The rest of the running backs on my dad’s roster are incoming rookies and each have scenarios where they could see the field, especially Pierce in Houston. All in all, if one or two of these rookie backs do well this roster will be just fine as constructed. I also love the future at this position with so many young talented players to develop.

Overall Grade – A I would have given this an A+ had he taken one more proven running back over a rookie.

Before we get into the receiver position, I want to remind everyone that Deandre Hopkins was not suspended at the time of this draft. With Hopkins available my dad left the draft with a total of 7 receivers that are expected to put up big numbers this season. Out of the group, my favorite 2 picks were Drake London with my dad snagging him at the 7.01, and Christian Watson a round later with the 8.12.

Another great pick for this roster was D.J. Moore in the 13th round. I know Moore’s salary is a bit pricey for some but with the way this roster was built Moore’s salary will not be much of a concern for at least a couple of years. One pick in this group I really want to highlight for our new users is Michael Thomas who was selected in the 21st round. I can 100% say you will never see Thomas go this late on any other platform.

Overall Grade – A+ Overall I think my dad absolutely crushed this position with so many options at his disposal he can afford to play matchups every week. Of course, I am not holding the Hopkins suspension against him

With only 2 players drafted at this position, this should be rather quick. I love the selection of Pat Freiermuth as he seems like a lock to be a top 10 tight end each season at an affordable salary. Where things get dicey is beyond Freiermuth with rookie Jeremy Ruckert as the only other option for my dad. I love the potential of Ruckert, but the Jets are already utilizing 7 of their roster spots on tight ends so I am not sure when the Ohio State product will see the field.

Overall Grade – C Had this been a real league depth would be a huge issue, though I love the Steeler, Pat Freiermuth.

Q. What would you do differently in an actual startup draft?

A. I may have gone a different direction with the Michael Thomas pick to give myself more cap space to make moves. Outside of that I was very happy with how my team turned out, though I am glad this was only a mock draft because of the Hopkins suspension.

Q. What surprised you the most?

A. I wouldn’t say surprised, but it was odd to see some of the bigger names available so late in the draft. Michael Thomas is a Buckeye great, and I couldn’t leave him sit any longer.

Q.  Do you see yourself playing Dynasty Owner long term?

A. Absolutely! I had a lot of fun with the draft, and it is a much different experience from your typical dynasty league draft. I will be joining a new league with my son this year!

Overall, I feel my dad did very well for this being his very first Dynasty Owner draft that happened to be filled with several experienced users for him to deal with. If this were my own team, I just drafted I would be all in right away trading for a second quarterback, a top tier tight end, and a running back like Tony Pollard.

I do love the running backs that my dad drafted but with the way injuries always affect that position he may need one of the rookies to play a bigger role than he intended for. I feel come 2023 is when this roster would really come to life and compete for championships had it been a real draft. My favorite position group drafted by my dad would easily be the receivers with names like Deandre Hopkins, D.J. Moore, Dionte Johnson, Michael Thomas, and Hunter Renfrow to carry the roster until players like Drake London, Christian Watson, and Jalen Tolbert are ready to produce.

Another factor I love about having all these expensive receivers is the fact he will be able to use an amnesty provision to move on from whoever is not living up to their contract and will still have plenty of depth at the position. As I stated earlier in the article, I feel the tight end position could use some work, but he is just a trade away from solidifying the position. All in all, I feel my old man did very well for it being his first time on the platform and should give many of our new user’s hope that they will be able to succeed when playing Dynasty Owner!

Thank you all for reading and be sure to check out the other content coming out from Nate, Steve and Matt. Stay safe out there and good luck on your 2022 Chase for the Ring!