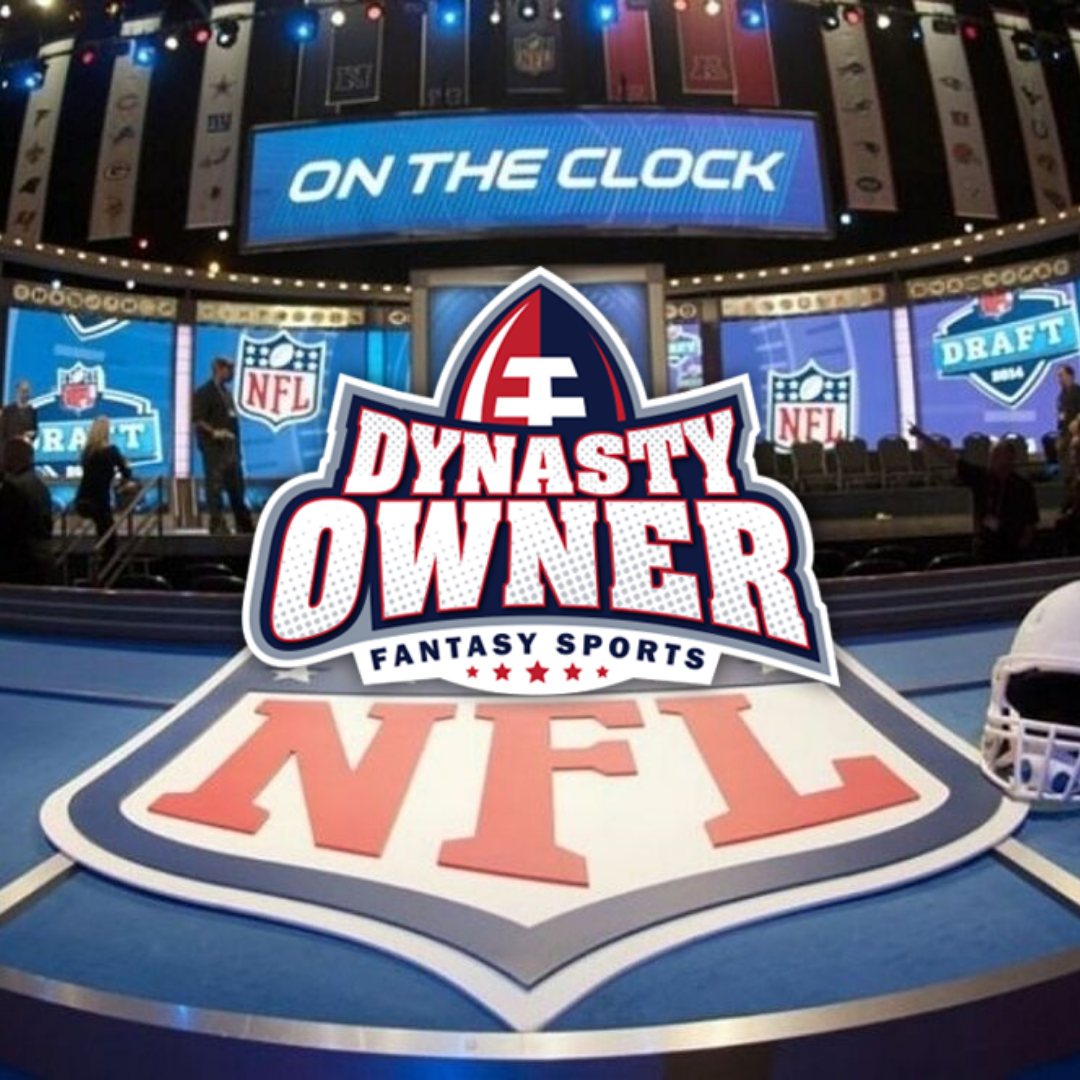 Dynasty Owners, it is almost time for your rookie drafts and in honor of that I wanted to do an article geared towards the most important selections of these drafts. The rookie drafts are one of my favorite times of the year because everyone is active, making trades and it’s the best time of year when you’re in the middle of a rebuild.

For rebuilding owners, the goal is to have multiple picks in each round rather than just your own. Because of this, I will breakdown who I would take with each pick in the first round with a rebuild in mind. I will also break down a few things about each player such as why I took them and what to do with them after drafting them. Typically, you would see quite a few quarterbacks in the first round of a Dynasty Owner rookie draft, but the crop of QBs is not exactly the strong suit of the 2022 class.

Overall, there is some talent to be had in this class but most of it will come from the wide receiver position, though I do like a couple of the running backs expected to be taken after the first round. The last thing I want to touch on is the bonus pick in case any of you are not familiar with it. The reason you will see a 13-pick first round in this article is because here at Dynasty Owner, we reward the winner of the Loser’s Bracket tournament, comprising of the six non-playoff teams in each league, with a bonus pick at the end of the first round (pick 1.13).

As always feel free to let me know if you agree or disagree with any of these selections via Twitter.

I know, I know, I have preached time and time again not to target running backs early in a rebuild. However, with the landscape of today’s NFL, I think this is a no-brainer. The reason I would go this route is not because I want to keep Hall long-term but because I want to trade him for a bounty of picks shortly after the draft to the worst contender in need of a running back. The Jets drafted Hall high in the NFL Draft and from all the reports I have seen, they were targeting him from the start. Hall is an uber talented back and I expect him to have a long productive career in the Big Apple.

While this may surprise some because of my love for The Ohio State Buckeyes, Drake London is my favorite receiver of the 2022 draft class. London is a physical freak and was able to put up insane numbers for only playing in eight college games last season. I know many are worried about the quarterback position in Atlanta, but I feel London’s talent will prevail regardless of how things play out. I see London as a long-term building block almost immediately.

The #3 spot in the upcoming rookie drafts is an easy selection for me with Garrett Wilson being the best talent available. I have touched on Wilson numerous times this off-season, but my favorite part of his game is the catch radius he provides. If the ball is in the same area code as Wilson, he will likely come down with it. Wilson has similar concerns as London regarding the quarterback position, but Zach Wilson ($8,787,670) was a blue-chip prospect just a year ago so those concerns could change rather quickly. No, this is not me hoping on the Zach Wilson bandwagon, I am trying to remain optimistic.

I am a little torn on how to view Jameson Williams heading into his NFL career, but I will defer to the many scouts who said he would have been a lock to be the first receiver drafted had he not been hurt. I feel Williams is an excellent selection here for rebuilding owners because of the talent and the fact him that he won’t be on the field right away. That will benefit your Dynasty Owner team in its pursuit of the Number 1 choice come 2023. Williams is blazing fast and should make a living in the NFL toasting the defender lined up across from him. If the scouts were right on Williams, you will find yourself with a great building block.

I have to say this was by far the toughest selection on the list, but I took Kenneth Walker for two reasons. The first being he will produce early on because of Seattle’s love affair with running the ball. The second is because of what he will get you in a trade once he does start producing. As I said when covering Breece Hall, the landscape of the running back position is extremely thin which will only boost a young producing running back’s value. Walker is an excellent pure runner, and it should be on display from the jump.

In the sixth spot we technically have our third Ohio State Buckeye, Chris Olave. Remember, Jameson Williams played for Ohio State before transferring to Alabama. Olave is a silky-smooth route runner who was drafted in the first round by a team that has made a living drafting kids out of Columbus, the New Orleans Saints. Olave has the skill set to start immediately in today’s NFL and I love the fact he will be able to learn from one of the most respected pros in the NFL, Jarvis Landry ($3,000,000). I expect Olave to have a long and productive career and think he will be a great addition to any rebuilding roster.

I will admit Burks was my favorite prospect before the combine and the NFL Draft. While I am still very high on him, he has dropped to the fifth spot in my receiver rankings. Burks is a physical specimen who plays a lot like A.J. Brown which should help his transition to the Titans be that much easier. I do expect Burks to have some growing pains, but I have a feeling once he is able to acclimate to the big leagues, he is going to be a nightmare for defensive coordinators. At the #7 spot in a Dynasty Owner rookie draft, you have to love Burks falling into your lap as a future building block for your roster!

Skyy Moore, everyone’s favorite “sleeper” of the upcoming rookie drafts, slots in at the Number 8 spot for me. While I will be honest that I have not dug into him a ton just yet and I am not so sure I have to do so. The Kansas City Chiefs are a top tier offense and organization that I have no issue putting my trust in. I am not sure Moore will be ready to burst onto the scene in Week 1, but I do expect him to play well at some point in the season and when you’re rebuilding patience is perfectly ok. If things play out well for Moore, you will have a receiver connected to Patrick Mahomes ($45,000,000) to build around.

At the #9 spot, I have the last pick who I feel extremely confident about this year. Part of it is the talent Christian Watson possesses, but the bigger part is the quarterback that will be throwing him the ball. Watson could not have asked for much better of a situation playing with a Davante Adams-less Aaron Rodgers ($33,500,000) to start his NFL career. I am not sure about the longevity of Watson’s career with Rodgers expected to leave town soon, but he will play a ton this season and may return a haul in a trade later in the year.

At the #10 spot we have old Burger King Hands, Kenny Pittsburgh, and while I don’t love the player, the pick here makes a ton of sense. Any starting quarterback on a rookie salary holds immense value on the Dynasty Owner platform and that’s exactly why I have Pickett at Number 10. While I am not high on Pickett, my opinion means nothing and he could easily prove me wrong if, and hopefully when, he balls out for the Steelers at any point this season. Overall, I feel Pickett will get you a few solid fantasy years on a dirt cheap contract in a worst-case scenario and that alone makes him well worth the 10th pick.

In the 11th spot, I may be a little biased but to be fair I checked into several different ADPs (Average Draft Positions), and this is area where I expect George Pickens to be selected. I know Pickens is not viewed as a top-level talent, but I am here to tell you those opinions are wrong. Had Pickens stayed healthy last season, I feel he would have easily been a first-round selection in the 2022 NFL Draft. The Steelers are also excellent when it comes to drafting receivers and I see no reason that changes now. I view Pickens as a small project because of the players in front of him on the depth chart but I also feel he will become a solid building block in the near future.

At #12, we have my good friend Bryan Peck’s favorite prospect in this year’s class and that player is James Cook. Cook is the younger brother to stud Minnesota running back Dalvin Cook ($12,600,000) and if he can play anything like his big brother, he will be an absolute steal at this point in your Dynasty Owner rookie draft. Cook arguably had the best landing spot of all incoming fantasy players after going to the Buffalo Bills who had been linked heavily to the running back position leading up to the draft. In Buffalo, Cook gets to play on one of the best, if not the best, offenses in all of football. My plan when drafting Cook would be to trade him as soon as he has a big game and the hype sets in.

While this selection may not be a fan favorite this early, I have been liking Jahan Dotson more each time I turn on his film. When most look at Dotson, they see a smaller receiver who may not be able to produce at all levels in the NFL but what I have seen says otherwise. Dotson is extremely athletic, a solid route runner, and has no issues going up to get a ball. My favorite quote from Dotson was after a catch against Ohio State and he said, “the ball is like a million dollars in the air, and you have to go and get it”. Dotson will have the privilege of working opposite of Terry McLaurin ($961,918) to start his career and it should benefit him immensely.

I hope this helps all you rebuilders with your upcoming Dynasty Owner rookie drafts. If you have any questions at all or need any advice with one of your selections, you can always reach me on Twitter (@JayPoundsNFL). Be sure to check out our other content from Steve, Matt, and Nate. Stay safe out there and as always good luck on your 2022 Chase for the Ring!