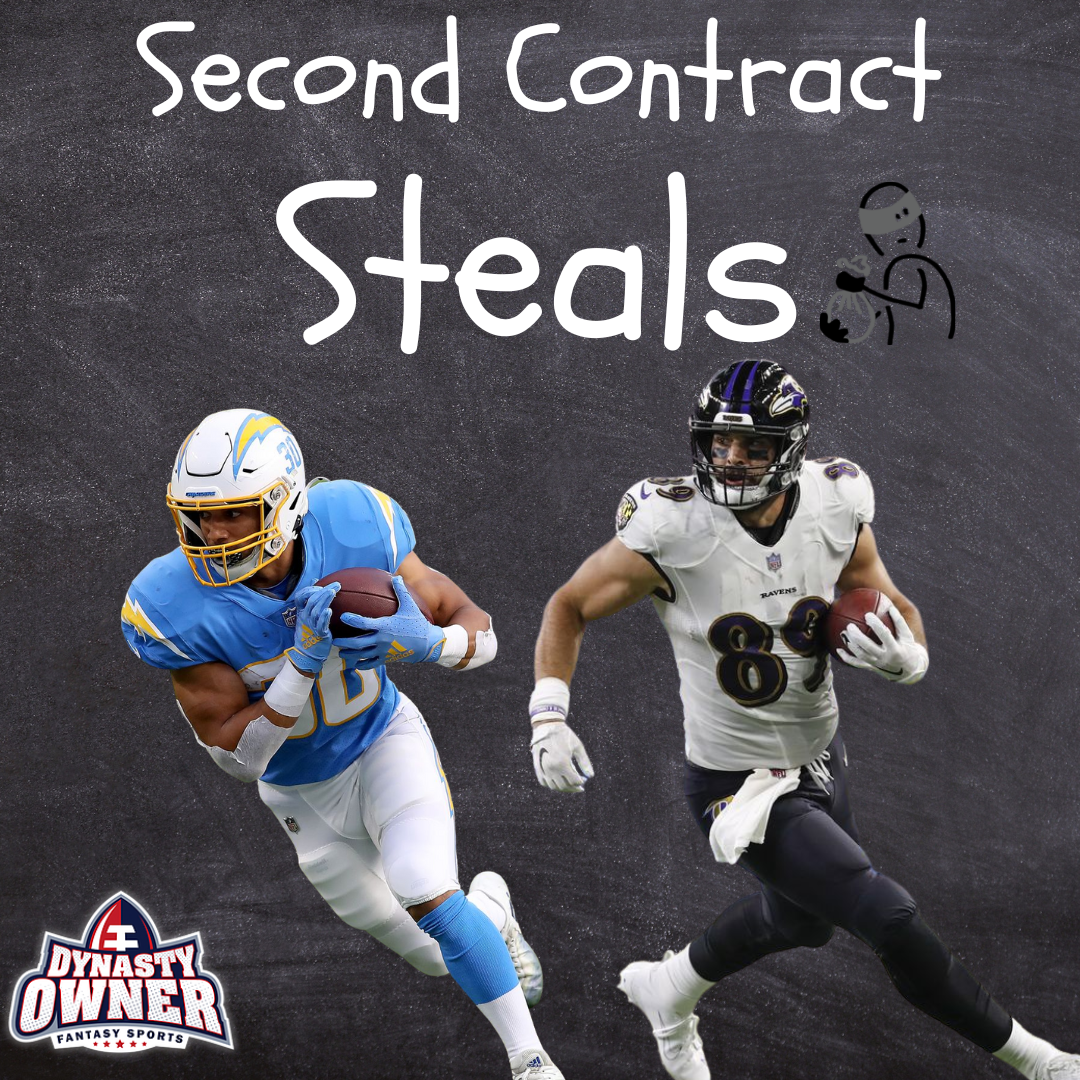 Usually when a player moves on from their rookie contract, they get expensive. It’s harder to keep players who have found their payday and are eating up a substantial percent of your Dynasty Owner salary cap ($145.74 million for the 2022 season). Players like Christian Kirk ($18,000,000) and Alvin Kamara ($15,000,000) get paid big money and then end up either on the trade block without any great return or in the Free Agent Auction.

How do you manage players who are about to get paid? We can look at projected Dynasty Dollars per Point (DD/PT) as a good indicator of value. Of course, the players who come out of nowhere will lead this statistic, but we can still figure out those players who, even with their payday already past, are worth rostering and paying up for in your league.

One of the top running backs in the league the past three years, Ekeler is set up once again for another Top-12 finish in Dynasty Owner and at this price point, he’s an easy buy. While other running backs at this level are on contracts over $10,000,000, Ekeler signed his extension before truly breaking out and is now a steal. He’s under contract for two more years and the Chargers will surely continue to use him in the passing game extensively.

A second contract running back who is under $10,000,000, my eyes are looking for any production from a guy like Edmonds. He finds his new home with Mike McDaniel, who comes over from Kyle Shanahan’s run-heavy 49ers offense.

Will McDaniel continue to ride the hot hand and rotate running backs like Shanahan did? Possibly with the group of running backs they have in Miami that includes former-49er Raheem Mostert ($2,125,000), but if you follow the money (and the talent), Edmonds should be the main back for his new head coach. Edmonds has talked extensively about choosing Miami for the way they would use him out of the backfield, which means not only will he get his carries, but he’ll likely see a good amount of work in the passing game. Edmonds was #9 in the NFL last year for running backs with 1.65 yards per route run, and with that efficiency, he could be set up for a huge year with his new team.

While Gallup may not provide an immediate impact for your team, as he is coming off an ACL tear, the 5-year contract he just signed will give you an easy cap number for years to come. On the Dallas Cowboys offense, now without Amari Cooper ($20,000,000), CeeDee Lamb ($3,502,503) is locked into the WR1 role but after that, there is no clear WR2. Now Jalen Tolbert ($1,283,930) is a popular sleeper, but he is still a rookie coming from South Alabama and may not be able to outplay a healthy Gallup in 2023. We know that the Cowboys are going to throw the ball and Dak Prescott ($40,000,000) has shown the ability to support multiple players for fantasy relevance. Gallup has shown the ability to win downfield as well as move the chains underneath when needed. A versatile and physical receiver, he should be able to find a nice role as a complement to Lamb moving forward.

Andrews is once again going to be the top target for Lamar Jackson ($23,016,000), especially now that Marquise Brown ($2,946,835) has made his way out of town and to Arizona. Don’t sleep on sophomore receiver Rashod Bateman ($3,149,853), but even with a second-year breakout incoming, Andrews is slated for 120+ targets (he saw 153 last year) and will probably break double-digits in receiving touchdowns now that Jackson will be back and healthy. Andrews in 2021 led NFL tight ends in most categories and that was with backup quarterback Tyler Huntley ($895,000) taking the majority of snaps throughout the second half of the season. Don’t worry about paying up for talent when it gives you such an advantage. The gap in production beyond the first four or five tight ends is so vast that you want to make sure you have a top-tier player locked in for many years.

That wraps it up for Second Contract Steals. Thank you for reading. If you have any questions feel free to shoot me a DM over on Twitter (@NateNFL).