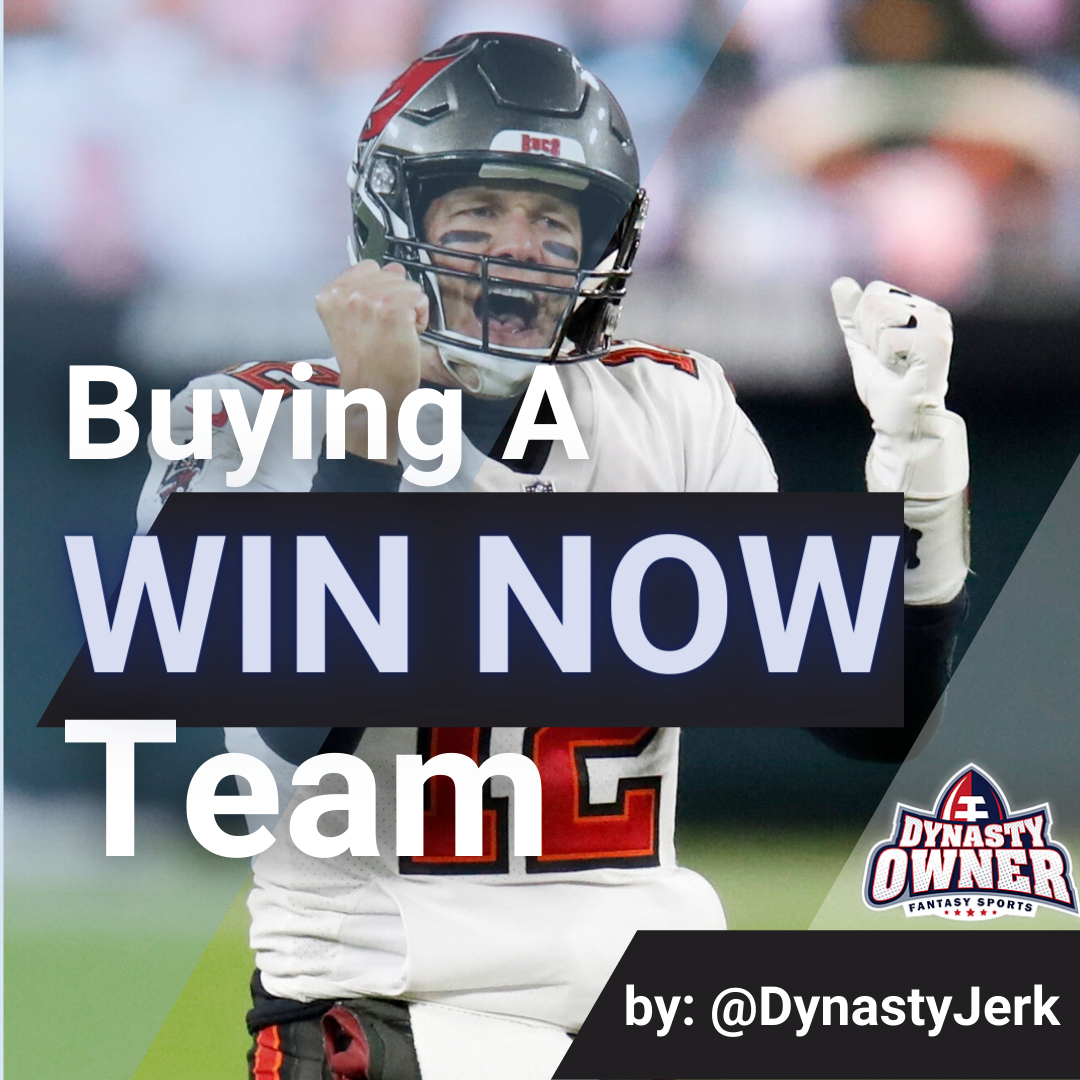 Hello football fans, and hello Dynasty Owners. I welcome you to another Free Agent Friday. In next week’s article, I will discuss a player who is receiving very little off-season buzz. That player is Cordarrelle Patterson. There are several reasons why I think he is not getting the “air time” that he deserves, and I will talk about each and every one of those reasons next Friday. Hopefully this will give you piece of mind if you currently roster him or are planning on drafting him in an upcoming startup draft. But before I jump ahead to next week, I have a confession to make.

I bought another Dynasty Owner team since we talked last Friday.

I couldn’t help myself. I am now up to nine total teams. My reason for sharing this story is not to brag about how many chances I have to win. Instead, I want to walk you through my buying process. As I stated last week, I have a very strict process that I use to determine if a team is worth buying. Today, I’m going to give you the condensed version. Let me show you my entire roster, and show you what pushed this team over the edge for me…

I am purposefully omitting kickers from this list as I don’t really mention kickers much anyway.

I know this is a lot to sort through, and it’s cumbersome, but here is my line of thinking. When it comes to the quarterback position, I look for at least two above average starters. You can see that I only have one at the moment. When I first looked at this team, I knew QB would be my biggest weakness if I was going to buy it.

Next we come to the running backs. With the RB position, I need at least three who I could consider starters (at least RB20). I think it’s a safe assumption that I have that. There is Najee, Mixon and Gibson. All three have possible outcomes of Top 10 running backs, and I think their floor is around RB20. However, it’s not enough to just have three studs. I need at least a little depth as well. Looking through the rest of my running backs, I find the depth I need. I have Patterson, Mostert and Dameon Pierce. All three of these players will be serviceable throughout the year, and they are all textbook Bench running backs.

While I like these wide receivers, I am a little worried about their depth. Once again, I’m looking for at least three stud wide receivers (at least WR20). I think we’ve found three top 20 wide receivers. Adams, Evans and Brown should give me an advantage over most of my opponents at wide receiver. I also have Lockett, Rondale Moore, and Renfrow as solid Bench receivers.

Finally, the tight end room. Darren Waller should be a Top 5 TE on the season, and I’m not too concerned about the addition of Adams. I expect Waller to receive at least 100 targets, 80 receptions and 1,000 yards in 2022. I have Tyler Higbee as my Bench tight end which is just fine with me. He may be a little overpriced for a backup, but I can manage that cap. I also plan on dropping Gronk as soon as I take over this team.

So, I’ve looked through the meat of the team, and I realize that this could be a viable addition to my portfolio. In addition to the players, I look at the future draft picks and salary cap. I am currently up against the cap with this team, and I have all my original draft picks for the next six years (This league very recently did a startup draft).

I picked this team up in the Orphan Store for $27, and I still had to pay the TeamStake fee of $100. So here are the strengths and weaknesses of my team.

I have absolutely no problem spending this much money on an Orphan Team especially when it is more of a “win now” team. I’ve said it before, and I will repeat this every season.

“It’s so rare for us to get a real chance at winning a dynasty league. We have all this preparation, build up and research and some of us will go without winning for years at a time. When you have a team that has an above average chance of making the playoffs, you should be concentrating on doing just that…Make the playoffs and see where they take you. I’m not advocating to leverage your entire future for this one year, but you should be aggressive and make a push for the championship.”

I will give you a real life example of this. Not long (30 minutes) after I purchased this team, I started trade conversations with another Owner in the league. I recognized that I needed more quarterback depth, so I approached the Dynasty Owner with Jalen Hurts and Derek Carr on their roster. I approached this owner in particular because I actually wanted Carr. I was planning on betting heavy on the Vegas offense this year. My plan was to drop Gronk and Lockett to make cap space for Carr. I figured I wouldn’t have to spend much more than a 1st round draft pick for him.

Well, that’s not how the events shook out. It turns out that this Dynasty Owner was willing to trade Hurts as well. I made an aggressive first offer of a 2023 1st and a 2024 1st for Hurts. This owner recognized that I was not messing around, and he countered with a 2023 1st round draft pick, a 2024 1st round draft pick and Dameon Pierce for Hurts and Ronald Jones. I took the trade, dropped Gronk to free up salary cap space, and now I found my missing quarterback.

Did I give away two potentially stud first round picks? Yes, I did. Did I give up too much? Some might say yes. But in return I ensured that my team is much more well-rounded, and I didn’t have to drop Lockett for the cap space either. It’s very safe to say that I am all in on this year, and I am more than okay with that.

This is just one example of how you can turn an abandoned team into your own. I already feel like this is my team, just from a single trade that I pulled off.

As I said in the beginning of this article, I will put the Spotlight on Cordarrelle Patterson next week. Thanks for reading. If there is any player who you want me to Spotlight, just message me on Twitter (@dynastyjerk) and let me know. I would appreciate it if you followed @Dynasty_Owner on Twitter as well as subscribed to Dynasty Owner on YouTube. Take care everyone and be safe.