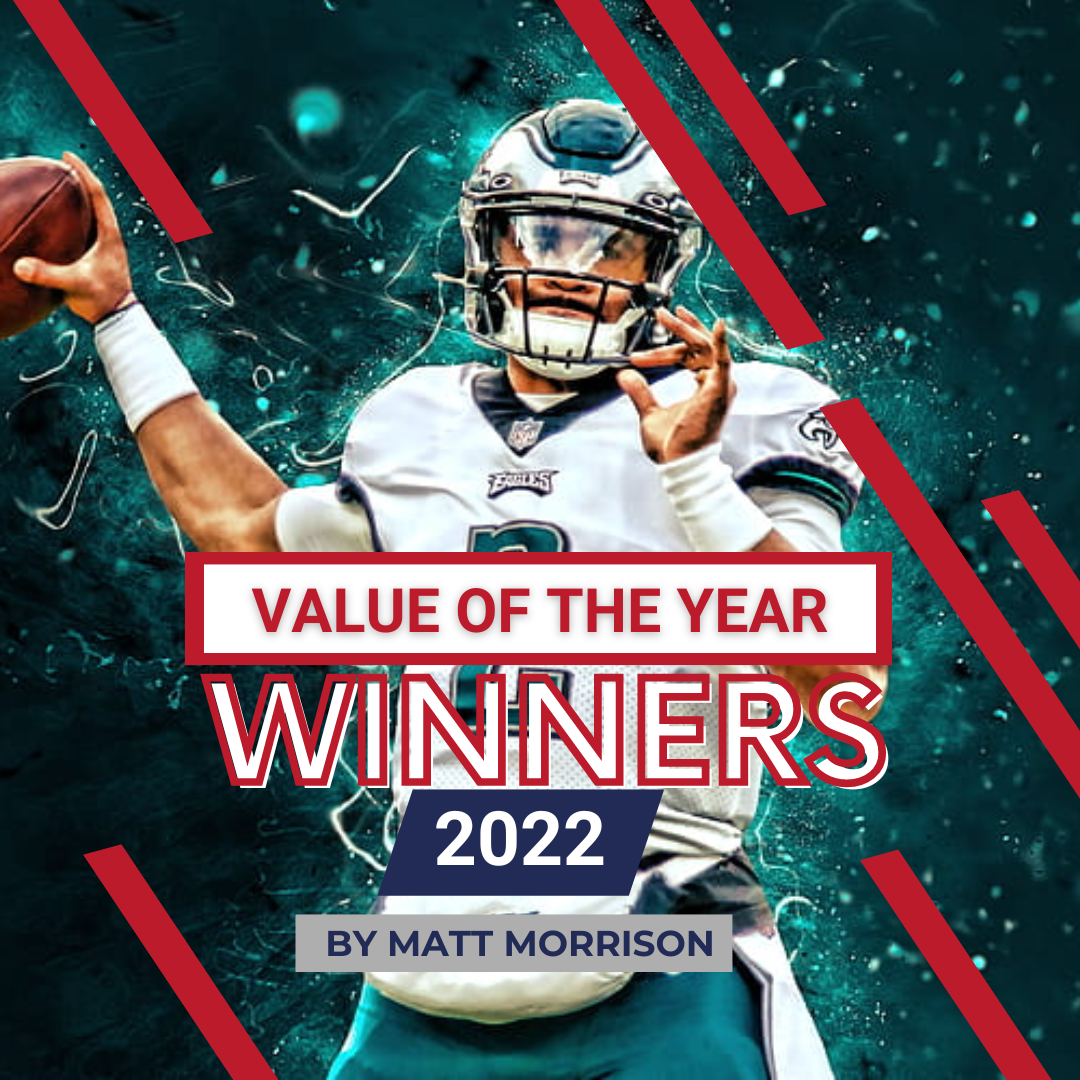 2022 Value of the Year Winners

Well, now we can officially say that the Dynasty Owner season is complete. Another one is in the books. I hope everyone enjoyed this season as much as I did. With the end of this season, I will tie a bow on it with the Value of the Year (VOTY) winners. I will give you all the official VOTY winners for each position as well as the overall winner.

I think we all saw this coming, but there was no other quarterback that was even close to Hurts in terms of value this year. The next closest player to Hurts was Davis Mills ($1,304,383) at  $6,658 Dynasty Dollars per Fantasy Point (DD/FP). It is disappointing that Dynasty Owners couldn’t utilize Hurts’ greatness in the Dynasty Owner playoffs this year, but hopefully, you will get that opportunity next year.

Here is what I wrote about the QB VOTY last season.

“In the end, Jalen Hurts just had too good of a season combined with a very cheap salary for him not to win. He is the Quarterback Value of the Year for 2021.

Excluding Week 17, Hurts is the QB10 in terms of total Dynasty Owner fantasy points (344.0), and he is the QB1 in terms of Dynasty Dollars per Fantasy Point (DD/FP) at $4,379).  Congratulations to everyone who has Hurts on their Dynasty Owner roster as there was no better value at quarterback this year.”

What a remarkable accomplishment for Hurts. Not only was he the best QB value over the past two seasons, but he improved his production as well.

Pollard was RB7 to finish the season. Obviously, he was an amazing value, and he’s earned himself a massive contract increase for next season. I honestly don’t see the Cowboys keeping Pollard around next year. Let me explain…

The Cowboys seem to be blindly loyal to Ezekiel Elliott ($15,000,000). It’s not that Zeke is fully washed or that he is not useful, but rather that his salary implications cannot be overlooked. I believe that this loyalty will continue and that Pollard will be squeezed out as he will demand more money than the Cowboys want to deliver. I can’t imagine the Cowboys will pay more than $20 million for their running back room.

Let’s see how the running back VOTY last year compares to this year.

“However, the trophy belongs to Myles Gaskin.

It’s hard to believe a player that is viewed as a disappointment can win, but that’s exactly what can happen when you have a salary of $651,694. I would have loved to name Jonathan Taylor as the winner, but the reality is that he would have had to outperform Gaskin three-fold in order to win. That didn’t happen and Gaskin took home the hardware with 163.4 Dynasty Owner fantasy points and a salary of $651,694. Gaskin finished the season as RB23 in terms of fantasy points, and RB1 in terms of DD/FP.”

Gaskin to Pollard is quite the difference. When Gaskin won last year, he was RB23. Pollard finished as the RB7 this year.

St. Brown was one of my favorite players to watch this season. Yes, it helped that I have him on my roster in almost half of my Dynasty Owner leagues, but he really was fun to watch. He was a PPR machine this season to the tune of 100 receptions with essentially two missed games. The next closest wide receiver to his value was Terry McLaurin ($961,918) who had a great season in his own right.

“The winner this year is Renfrow. His salary is roughly 70% of Johnson’s, and his production was largely the same. This award is especially important because the draft capital and/or trade value you had to give up when acquiring Renfrow was minimal. He was being drafted in roughly the 15th round. What an amazing season from Renfrow, and it’s one that he will attempt to recreate (or improve on) in 2022. Renfrow finished as the WR13 for total Dynasty Owner fantasy points (221.9) and WR1 for DD/FP ($3,195).”

Renfrow was a better value last year than St. Brown was this year. Either way, look for St. Brown to continue or maybe even add onto his value next year.

Dawson Knox ended up as the VOTY for tight ends due to his touchdown in his final (Week 18) game. A fine season by Knox saw him finish as TE10 for the year.

If you read any of my articles last season, you should know who the VOTY tight end was. This is because he was also the overall VOTY…

“That player is Mark Andrews ($863,290). When this regular season concludes, Andrews will have over 100 receptions, over 1,200 receiving yards, and at least 10 touchdowns. This is a truly remarkable feat for a player who was perennially considered a low volume tight end.  Andrews has earned himself the 4-year, $56 million contract ($14 million per year) that he signed back in September. Congratulations to those of you who owned Andrews this year. I have a feeling it will be a long time before we encounter a tight end value like this again

Andrews finished the season as the TE1 for total points (271.7) and TE1 for DD/FP ($3,177). Let me put it this way, if Andrews was labeled as a wide receiver, he would be the WR6 on the season. Not only that, but he would be the WR1 in terms of DD/FP. I hate to belabor the point too much, but I think it’s worth stating again:

I have a feeling it will be a long time before we encounter a tight end value like this again.”

This was definitely true. Knox’s DD/FP amount was almost exactly twice as much as Andrews’ was last year.

Value of the Year

Over the past three articles, I have listed and discussed all 12 of the VOTY nominees. Here is the recap…

In the end, Tony Pollard is the Value of the Year for the 2022 Dynasty Owner season. I thought there was little chance it would not be Jalen Hurts and it probably would have been had he not missed the final two games of the fantasy season. However, Tony Pollard is the winner even though he missed Week 17. Pollard had an outstanding season where he finished as RB7 and the overall 30th ranked player.

He has really made a name for himself (and just in time for free agency). Just last year, he was not even a finalist for this award.

Who will be the Value of the Year next year? I have my predictions at the moment, but who do you think it will be?