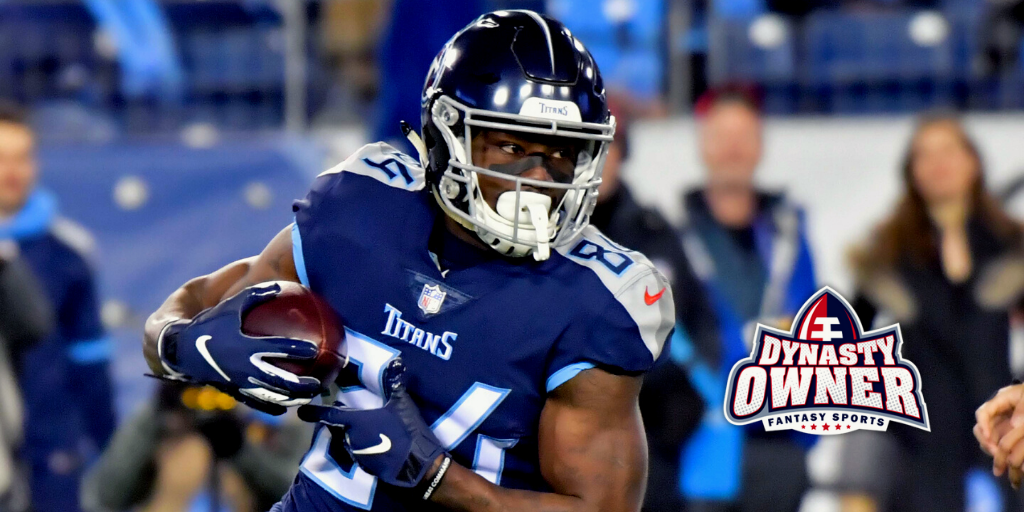 The 2020 Dynasty Owner amnesty period is coming soon (official date TBD), so Dynasty Owners better start thinking about what players on their current roster aren’t worth the cost of their salary and should be removed free of charge.

Originally, this was going to be a single amnesty article, then I realized that there were plenty of QBs and RBs who Dynasty Owners could use amnesty on, so I broke it up into two articles. We looked at QBs and RBs in our first amnesty article and now it’s time to look at receivers.

However, there are so many WRs who Dynasty Owners could use an amnesty provision on, that one article on just WRs isn’t going to be sufficient, so now it’ll be two. Similar to the QBs and RBs article, all of the WRs and TEs highlighted are owned in 50 percent or more of Dynasty Owner leagues and should be considered prime candidates for amnesty.

There are a lot of receivers with salaries of $10 million or more who didn’t earn their big paycheck in 2019. Some of those players might be released in the coming days and weeks, but others will stick with their NFL teams through the 2020 season and maybe beyond. Many of them should be dropped by their Dynasty Owners using the amnesty provision. If you made a mistake by drafting one of these guys in 2019, don’t make the same mistake twice and fail to use the amnesty provision on that guy in 2020. Unless of course, you have other, more expensive amnesty candidates, like a high-priced QB or RB with arthritic knees, on your Dynasty Owner roster.

Brandin Is Not Cooking with Gas

Cooking with gas is one of my mom’s favorite expressions and she taught it to my son who uses it all the time to describe when someone is doing a good job. He would definitely say that Brandin Cooks was not cooking with gas in 2019. After being drafted as ADP 86 in Dynasty Owner leagues, Cooks finished the season as the 63rd best WR (not player, but WR) in 2019. He did miss two full games with an injury, but didn’t perform up to his salary standing before he got injured either.

He averaged a respectable 13.9 Dynasty Owner fantasy points per game for the first quarter of the season (4 games), making him a fringe starting WR. From there on, Cooks only averaged 6.2 Dynasty Owner fantasy points in his final 10 games (aka, a Practice Squad player). It’s possible that Cooks regains his 2018 form, but even then, he was just the 13th best Dynasty Owner WR – a solid #2 WR for his Dynasty Owners. Cooks is almost universally rostered in Dynasty Owner at 96%, so plenty of Dynasty Owners have this decision to make. Considering that he is currently the sixth highest paid WR and has 4 more years left on his contract at $16.2 million per year, anything else than being the best WR on your Dynasty Owner team is not worth the salary. The Rams could release him and take the salary cap hit, but that’s unlikely, and there’s probably not a trade market for him either. Therefore, he’ll likely stay on the Rams and be the fourth option in the Rams 2020 passing game behind Cooper Kupp, Tyler Higbee and Robert Woods. Fourth option for $16.2 million until 2023 is not what Dynasty Owners need from someone who occupies almost 15% of their $110 million salary cap. Dynasty Owners with Cooks on their roster owe Paul and Tim a big “Thank you” for the amnesty provision and should use it on Cooks.

It’s been quite a few months for Sammy Watkins. He was the second-best player in Dynasty Owner in Week 1, when he had 46.8 Dynasty Owner fantasy points (9 receptions, 198 yards receiving, 3 receiving TDs), second only to Dallas QB Dak Prescott. Just recently, he won the Super Bowl and contributed 5 catches for 98 yards in the game after having a productive playoff game against the Texans and a monster 7 reception, 114 yards receiving, 1 receiving TD game in the AFC Championship game against the Titans.

Because of his playoff performance, he might not get released by the Chiefs, but have his contract reworked, making him the second “best” WR candidate for Dynasty Owner amnesty. Even if his contract is restructured, he might still be too expensive to keep. If it stays as is, Watkins’ Dynasty Owners will be spending $16 million per year for the next two years for a player who was the #54 ranked WR and isn’t even the top WR on his team.

Or, his performance in the playoffs could be a harbinger of things to come in the regular season and if the Chiefs agree, it’s very possible that they keep him around. This would leave his Dynasty Owners with the decision of whether to use the amnesty provision on him or not. If you are one of the Dynasty Owners in 59% of leagues that Watkins is rostered in, it’s not a hard decision. Use it and find better and cheaper WRs available in the Free Agent Auction.

It’s Finally Time to Give Up on Corey Davis

The long-teased Corey Davis breakout season has never come to pass for the Tennessee Titans or Davis’ fantasy owners. In 2017, he was a rookie and got a pass, then he had a good 2018 season with 183.0 Dynasty Owner fantasy points and would have been the #28 ranked WR in Dynasty Owner. That’s a top Bench player, bye week and injury replacement for his Dynasty Owners. He was supposed to have a breakout in his third season, but 2019 was a severe regression in fantasy value for Davis with the emergence of A.J. Brown as the top WR in Tennessee.

There are plenty of rookie WRs who will earn less than Davis and some other WRs who Dynasty Owner can stash on their Practice Squad for less than his $6.35 million salary. His Dynasty Owners might have to pay that salary in 2021 as well, so be at the forefront of the Drop Corey Davis movement and use the amnesty provision on him.

So, it’s amnesty time and you need another WR after releasing Cooks, Watkins or Davis, here are two quality replacements available in nearly 90 percent of Dynasty Owner leagues:

Just like at QB and RB, there is no shortage of prime WR candidates for Dynasty Owner salary amnesty. In fact, there are so many WRs that there will be another article with more WRs who should be sent packing coming soon. Dynasty Owners with one of the WRs listed in this article on their roster can save several millions of dollars in valuable salary cap room by smartly taking advantage of this provision for the 2020 season.

What happens if you have more than one of them on your Dynasty Owner roster? It’s possible as a team in my Dynasty Owner league has all three! Out of the WRs mentioned, Brandin Cooks would be the first to go if I was that guy (thankfully, I’m not), followed by Sammy Watkins. Both of them have $16 million salaries, aren’t even the best WR on their NFL teams and need to go from your Dynasty Owner team as soon as the amnesty date is announced. So does Corey Davis as he’s been eclipsed by A.J. Brown as the #1 WR in Tennessee and has yet to earn his $6.35 million salary.

Look for Part 3 in the Dynasty Owner amnesty article series with a big-name, surprise WR listed to be posted soon. And don’t forget all of the great Dynasty Owner specific articles, podcasts, message board debates and Twitter posts to help you start getting ready for the 2020 Dynasty Owner season!